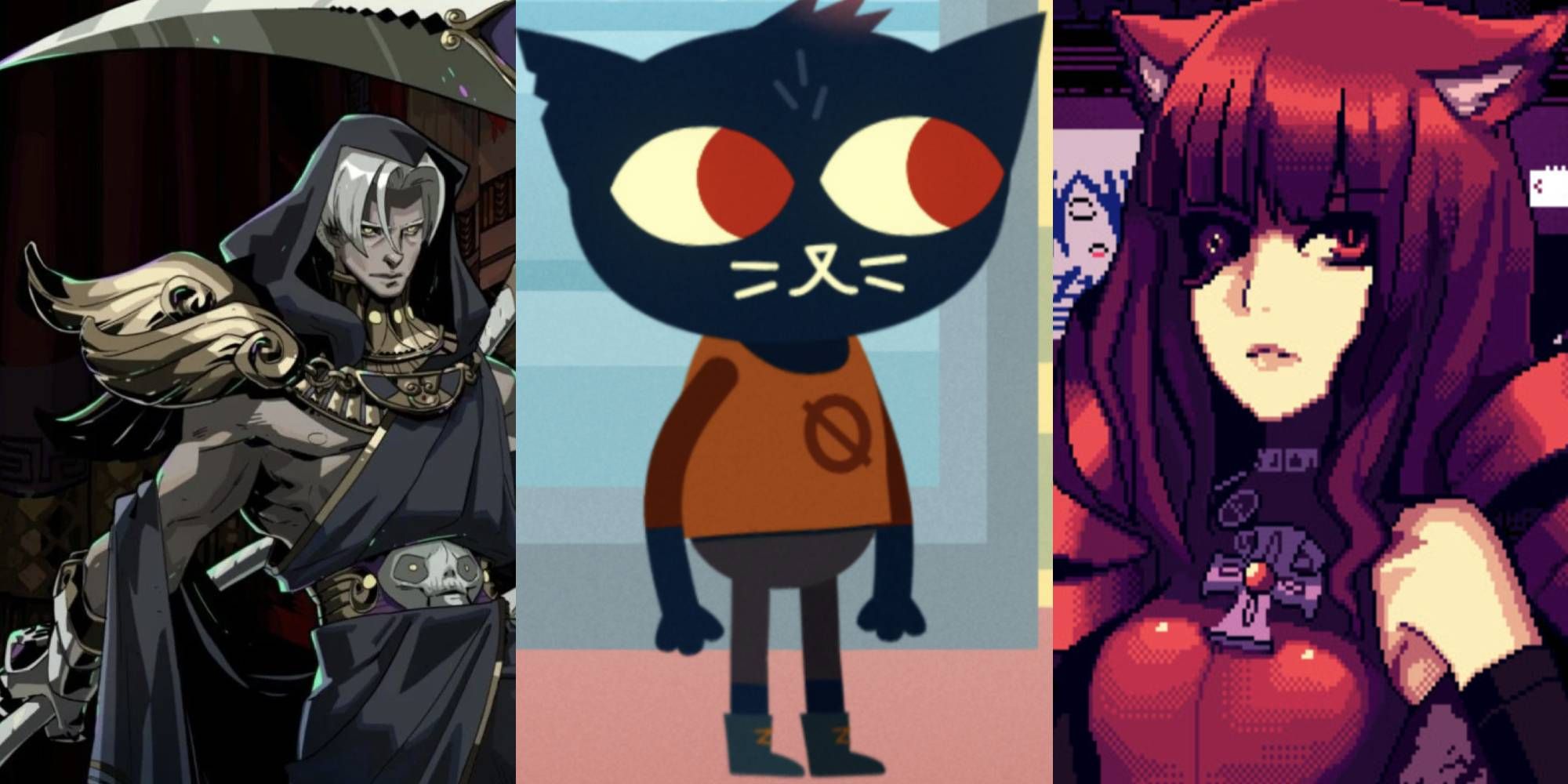 While there’s still a long way to go, LBGTQ+ representation in video games has improved dramatically in recent years. Even in Triple-A games, LGBTQ+ characters are starting to have positive, major roles in titles rather than just being the villains or disposable side characters, and more and more games are allowing players to hang out with same-sex characters.

The best representation still occurs in the indie space where many developers are making games centered around LGBTQ+ protagonists and their experiences. Hopefully these indie games will continue to inspire more representation in games and other media.

Released in 2019, Courage found is a short adventure game about a young gay man named Alex who moves to the cliffside town of Silverpine. While working on his romantic feelings for a local boy named Jake, Alex explores the area, helps all of the town’s unique inhabitants, investigates the mysteries surrounding an institute called The Vault, and attempts to save the small town.

Although the game only lasts about three hours, the well-written dialogue and deep lore easily draw players into this fantasy world. Besides the beautiful custom pixel art, the game also features an excellent soundtrack composed by award-winning British composer Jessica Kelly, who also worked on the soundtrack of Ori and the Will of the Wisps.

Released in 2020, If found… is a visual novel game that revolves around two stories that initially seem completely separate but slowly turn out to be connected as the narrative progresses. At the start, the player is introduced to Doctor Cassiopeia who travels through space to Planet X, which in real life is a term used for a hypothetical planet, but instead finds a black hole that will soon destroy Earth. Meanwhile, on Achill Island in 1993, a trans woman named Kasio returns home after finishing college.

Like other great visual novel games, If found… takes the genre and does something unique from a gameplay perspective. To uncover the story, the player reads Kasio’s journal entries and uses the cursor to erase the contents, which reveals more of the story below. Other than a few final choices at the end, the story is largely linear and mostly focuses on Kasio’s experiences with her family, who don’t support her identity, and the new friends she makes after running away.

Ikenfell is a 2020 turn-based tactical RPG that follows a teenage girl named Maritte Hildegaard who is a supposedly ordinary person in a world where some people are gifted with magical abilities. But, when she attempts to enter the magical school of Ikenfell to find her magically gifted sister Safina who has mysteriously disappeared, she suddenly develops pyromancy.

Along with several of Safina’s friends, Maritte sets off on a journey to find out why she now has powers, what happened to her sister, and why other strange magical phenomena are occurring. Every main character in the story is part of the LGBTQ+ community with Maritte ending up with Pertisia, Gilda having a crush on Maritte, male magicians Bax and Ibn being a couple, and several party members, like Petronella and Rook, being non-binary.

Considered one of the best metroidvanias available on Switch, Timespinner is a 2018 sci-fi fantasy adventure that mixes the gameplay of Castlevania: Order of Ecclesia, artistic style of The trigger of a stopwatch, and themes of LOOM. After the interstellar Lachiem Empire invades the planet Winderia and destroys the Qaelan clan, the main character, a bisexual woman named Lunais, must use her Herald of Time powers to avenge her family and change the future.

Due to the destruction of the old Timespinner device, Lunais is transported to another world in another time period. As she explores this uncharted territory, she encounters many NPCs who fall under various LGBTQ+ identities.

Released in 2021, Unsighted is a post-apocalyptic sci-fi metroidvania and one of the best games that focus on a female protagonist. Created by two Brazilian LGBTQ+ game developers, the game follows an amnesiac automaton named Alma who awakens in the world of Arcadia, which has been devastated by a war between automatons and humans.

Alma learns that the automatons are turning into mindless killing machines called the Unsighted because the resource that gives them sentience, Anima, is running out. Along with trying to re-release the Anima and save her friends, Alma also races against time to find her girlfriend Raquel.

While there are many great RPG Maker horror games out there, one of the best examples released this year is An outcry, which follows a 25-year non-binary shutdown known as No Name. When the Unnamed are accidentally locked out of their rundown apartment, they decide to talk to the various upstairs neighbors to try and get some cigarettes. But, after hearing a strange outcry, the building is soon surrounded by supernatural birds trying to kill the Nameless and their comrades.

As the player fights or slays the birds, the intense emotional narrative tackles important topics such as LGBTQ+ issues, anxiety, addiction, social justice, and corruption. Depending on the player’s choices, they will get one of five endings that either allow the unnamed to defend themselves or allow themselves to be swallowed up by society.

Inspired by the unique art style of classic PC-98 titles, VA-11 Hall-A: cyberpunk bartender action is a sci-fi visual novel bartender simulation set in a futuristic dystopia where everyone is oppressed by nanobots and forced to obey the corrupt system of the White Knights. In Glitch City, the main character, a bisexual woman named Jill, works as a bartender at the titular bar VA-11 Hall-A.

Unlike most visual novels, the player makes choices while preparing and serving certain drinks to the multiple unique customers who visit the small establishment. Depending on the drinks served, the player will get one of many different endings.

night in the woods

Released in 2017, night in the woods is a story-driven mystery adventure game that revolves around a diverse cast of zoomorphic characters. The main character, Mae Borowski, is a young pansexual woman who recently dropped out of college. After returning to her small hometown of Possum Springs, Mae discovers that her friend has disappeared under mysterious circumstances, and she also witnesses what appears to be a ghost kidnapping a local teenager at the Halloween party.

With these strange happenings, Mae and her friends Bea Santello, Gregg Lee, and Gregg’s boyfriend Angus Delaney decide to work together to solve the mysteries. During the adventure, the game explores important topics such as mental health and economic issues.

Created by transwoman Maddy Thorson, Celestial is a 2018 platformer centered around a young trans woman named Madeline who attempts to climb Mount Celeste. As she climbs the mountain, she meets an old woman named Granny who lives on the mountain and another climber named Theo. After a part of herself, known as “Part of Me” or Badeline, separates from Madeline, she is forced to face her demons in order to reach the top of the mountain.

RELATED: 10 Video Games You Didn’t Know Made By Women

Developed as a full version of the original PICO-8 2016 game of the same game, this game focuses on struggles with mental health and learning self-acceptance. For the title’s third anniversary, Thorson has created a free sequel to the original PICO-8 game.

Created by award-winning developer Supergiant Games, who also developed Bastion, Transistor, and Pyre, Hades is a 2020 action roguelike dungeon-crawler that follows Hades’ son, Zagreus, who recently discovered that his biological mother is Persephone. After learning that his father hid this truth from him, he decides to fight his way through the Underworld in order to reach the mortal realm and meet her.

During the game, Zagreus can romance the male personification of death Thanatos or any of the three furious sisters Megaera. If he likes them both, the three will start a polyamorous relationship. While Zagreus may also try to romance the shadow known as Dusa, she will turn him down and the two will remain friends.

NEXT: 10 Games With The Best Replay Value

Anastasia Wilds is a freelance writer for Screen Rant. Due to his passion for video games, his main goal is to write video game listings for the website. Along with writing, she also streams various video games on Twitch and uploads some of her highlight streams to YouTube. Prior to working at Screen Rant, she worked as a senior arts editor for “The Spectrum” newspaper at the University at Buffalo.

31% of respondents said it was their favorite character from Star Trek: Deep Space Nine