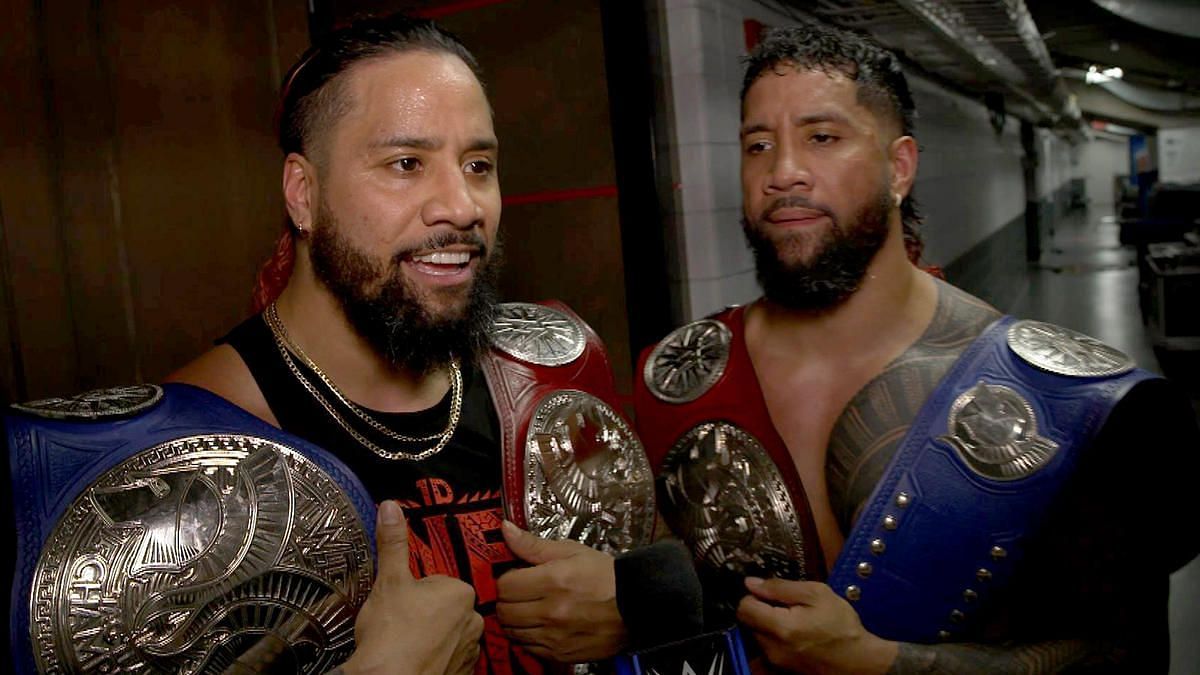 3 directions for the Usos after WWE SmackDown

The latest edition of WWE Friday Night SmackDown marked another successful Tag Team Title defense for The Usos. That being said, their latest triumph didn’t come easy, as Butch and Ridge Holland battled it out.

Following their win, The Usos continued their historic tenure as the longest reigning WWE SmackDown Tag Team Champions. Plus, they continue to reign supreme in the tag team division.

So what’s next for Roman Reigns’ right-hand man? No one knows for sure, but for now, let’s take some time to think about and discuss the potential possibilities.

Things have gotten a little tense but The Bloodline is doing just fine. Please respect our privacy at this time.

Things have gotten a little tense but The Bloodline is doing just fine. Please respect our privacy at this time. https://t.co/DF6RKAt4w9

Everything seems to be going well between The Usos and Sami Zayn at the moment. This is mostly due to Zayn being willing to sacrifice his body (and his dignity, in some cases) for the greater good of The Bloodline.

Simply put, Zayn is the pawn of The Bloodline, and until he comes to that realization, that’s probably how things will stay. Perhaps that realization came to fruition after he accidentally cost The Usos the coveted WWE Undisputed Tag Team titles.

Accident or not, it’s pretty obvious that Zayn is being used to ensure The Usos remain champions. If they’re no longer champions, they might not see much use for him.

#2. Sami Zayn surprisingly (and successfully) stirs up trouble among The Bloodline

If that happened, it would be the gap of the century. Also, of the three entries included in this list, the second is the least likely to occur. That said, Zayn’s impending turn doesn’t have to happen in the usual way.

Instead of looking like a gullible jerk, the former Intercontinental Champion could earn The Bloodline’s trust, convince The Usos that Reigns is just using them, and effectively drive a wedge between the champions.

Zayn was never considered a powerhouse, but he is known to be smart and resourceful. Is his alliance with The Bloodline just a ruse?

If this is a long term booking your heart longs for, this is your dream scenario. For those who have forgotten, The Usos’ relationship with Roman Reigns wasn’t always as kosher as it is today.

Jey and Reigns have been embroiled in a main event feud that dates back to 2020 during WWE’s Thunderdome era. In fact, at one point, their battles at Hell in a Cell that year got so intense that an injured Jimmy Uso got involved.

It was apparently the setup for a Jimmy/Reigns angle, but the former quickly lined up a few weeks later.

The Usos have helped Reigns retain his title several times since then, and it looks like The Bloodline looks stronger than ever. But what will it take to change that?

Maybe it’s the loss of the Tag Team Championship, Sami Zayn stirring the pot, or the Usos are just fed up with the Tribal Leader speaking out without giving them the recognition they deserve for once saving their ass. too.

Will The Usos betray Roman Reigns in the future? Let us know in the comments section below!