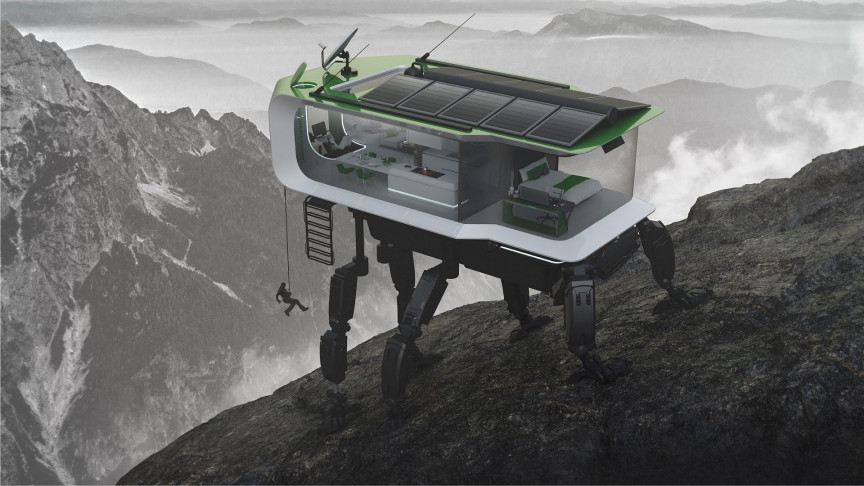 As the pandemic has driven people to far flung places and further from social distancing to â€œtrueâ€ distance from metropolitan areas, mobile homes seem like a futuristic dream.

The idea of â€‹â€‹work and travel changed a lot during the pandemic, and people turned to jobs that allow them to work from home or other remote locations. With travel restrictions becoming increasingly stringent at the height of the pandemic, along with being forced to adhere to social distancing rules, most of the world’s population have found themselves stranded at home. To find ingenious solutions, designers around the world have interpreted their homes and workspaces in their mobile versions.

A Bulgarian 3D designer, that of Encho Enchev, futuristic mobile home concept is designed to move on all kinds of terrain using its six mechanical legs and can set up camp wherever you want.

Enchev says the inspiration for his design came both from the growing popularity of remote working and his love for mountains and lakes. Enchev has seen people wanting to leave cities and go to sparsely populated areas in nature, but lack the comforts of home and have accessibility issues on rough terrain. Its concept is designed to offer a solution to these.

Stating that functionality and practicality were the most important things he cared about when designing his mobile home, Enchev also looked at other important issues such as weight and horsepower. The mobile home is powered by electric motors but also has an emergency diesel generator in case of engine problems.

The design is a cubic frame on six mechanical feet that appears to have emerged from futuristic sci-fi movies. The mobile home is capable of traversing almost any terrain including steep hills and mountain gorges with its mechanical feet which are enhanced with 2 inches (5cm) of non-slip rubber layers and two deployable spikes at the bottom of each part for easy bolting to the ground.

The mobile home can lay its foundations while remaining raised from the ground, descending or sitting on the ground.

The interior of the mobile home incorporates high-tech elements inspired by a futuristic architectural perspective. The windows of the mobile home are equipped with smart glass technology that can block sunlight when needed. Enchev also used automated furniture and smart tech gadgets in its design. With its integrated storage space, water tanks and power cells, the mobile home allows its residents to live comfortably off the grid.

While this is a concept, for now, Enchev’s design may one day become the norm in the future. Would you be ready to live in a mobile home?