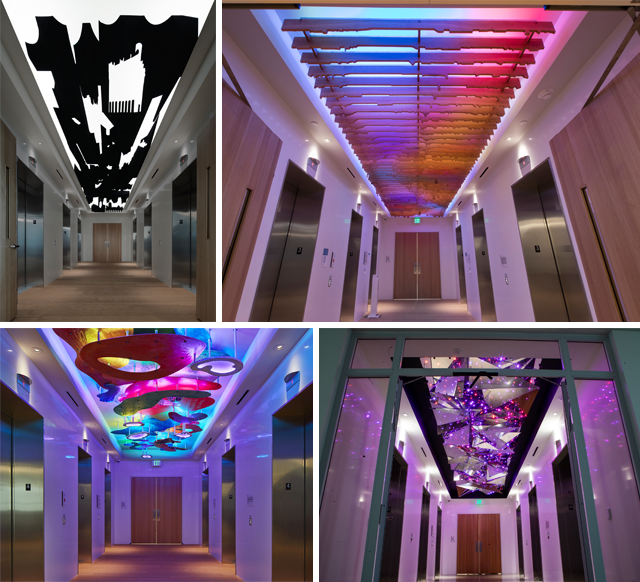 When Minneapolis city workers return to work on Jan. 10 – currently the plan, at least in a hybrid sense, according to the department – they’re going to be in for a treat. Many of the thousands of people who (theoretically) work in the brand new ten floors Civil service building covering everything from 311 to public works to police, have never even seen their new offices. Instead of being scattered all around the office sites at a variety of points in the city center, they will all be centralized. And the wait for them will be the city’s biggest public art debut in Minneapolis history.

“We almost all work indoors,” admitted Marie Altman, the city’s public arts administrator, describing the city’s other public works of art. “Usually all of our art has to deal with freeze-thaw conditions and be planned around what it would be like to be hit by a car, plow, or lawn mower.”

This is not the case for the $ 2M of works of art that are literally embedded in the new building, funded by the city’s public art ordinance which devotes 1.5% of investment budgets to art.

Instead, in this building they were able to commission and install a wide variety of intricate, detailed and car-free sculptures explicitly designed to bring together architecture, employee well-being and aesthetics in the city’s new building.

“There are three basic types of work: artist-designed bird-proof glass, murals designed on glass, and elevator lobby ceilings,” Altman said. â€œIt’s really wonderful to be able to do that. This is a once in a lifetime opportunity. “

Close up with the seal of the city

A historic work of art forms the centerpiece of the entire building: the 26-foot-tall foot Seal of Minneapolis, recessed in the center of the wall welcoming visitors.

When it comes to seals, this is one of the best, certainly superior to the overtly racist state seal or the epically boring St. Paul’s seal. Not trying to do too much, the logo depicts St. Anthony’s Falls at its industrial zenith, under the exaggerated slogan “En Avant”. (French for “en avant.”)

Visible even from across the street, the seal is a remarkable piece of historic preservation. It was once part of the Old Minneapolis Auditorium, the huge historic home of the Minneapolis Lakers, which lasted from 1927 to 1989. It was recessed into the wall, five stories above the sidewalk, after which an employee of the city â€‹â€‹of Minneapolis named Greg Goeke saved it from the rubble and kept it in a farm field for three decades.

Pro tip: From the cantilevered walkway attached to the skyway above the main lobby, you can get a close-up view of the seal, and bend down and almost touch the pretty puffs of coal pollution coming out of the mill chimneys .

According to Altman, many of the sixteen artists whose work is now in the building used the seal as partial inspiration for their pieces. For most or all, the triumphalist Euro-American industrial vision has become an answer, a foil for a new vision of Minneapolis in the 21st century.

Artistic balm for the mundane work of the city bureaucracy

Working for the government has a reputation for being a bit boring and repetitive. And if you spend enough time among the cubicles of municipal offices – as I did – you realize that the stereotype is not a complete fabrication; dealing with yard setbacks, enforcing municipal tax codes or signing bridge engineering isn’t exactly sexy work.

Perhaps this is the reason why much of the art nouveau in the public service edifice is dynamic: it changes throughout the day and throughout the year, as if it was intentionally designed to alleviate boredom.

Take for example, the centerpiece of the new works, the massive sculpture mounted on the glossy white terracotta floors that creaks with every step in the lobby. Called Current Conditions, Tristan Al-Haddad’s ever-evolving elaborate piece is the building’s most expensive piece and one of two new works of art directly linked to live data feeds. In this case, the LED lights embedded in the moving resin represent the current temperature and humidity, arranged in a time series that visualizes data going back six months.

As Altman describes, the complexity and mercurial nature of the piece is a feature, not a bug. It aims to keep the interest and engagement of city workers and visitors alive, to offer something different that deserves attention, day in and day out.

“There are people in this building who have been here everyday, for decades,” said Altman, who, as a twenty-year veteran of municipal government, should know. “They see it all the time [so] the artwork can’t be an â€œa-haâ€ moment, it has to be something where employees keep seeing new things over time. A lot of artists do things in their works where there is either great attention to detail or something that really captivates people for the duration of their experience here.

To that end, Al-Haddad’s sculpture is probably never the same twice. It slowly reconfigures itself throughout the day, while performing specific â€œprogramsâ€ at sunrise and sunset. (These days, during the winter solstice, it would be possible for a city worker to be present for both of these events.) It even offers an artistic glimmer of hope for those unfortunate people who have to work late.

â€œAt night he plays a ‘deep indigo’ program,â€ Altman described. â€œThe terrazzo picks it up and it’s wonderful; it’s really fun to be here at night.

Treasure hunt in the elevator

Believe it or not, the funniest pieces of art in the new building are the ceilings of the elevator lobbies. Each of the seven accessible floors has a distinctly lit installation that, when viewed in combination with the others, transforms the building itself into an immersive experience that is at least as good as that cloying Van Gogh exhibit that was circling around. .

In other words, when you get off the elevator to move around the office, make sure you look up.

â€œWe gave artists a foot of depth to work with and a requirement to use programmable LED lights,â€ Altman explained. “They had to follow the building code, which was complicated, but those were the basic settings.”

Along the way, the artists interviewed workers from different departments to get a feel for the type of job they had, the type of space they would enjoy, and the history of their fields.

The result is seven distinct and creative spaces that make a visit to the Civil Service Building a fun adventure for a visitor. In this way, it’s reminiscent of the now 90-year-old Saint-Paul Town Hall lobby, where the 18 floors all have different types of wall paneling.

From what I could glean from chatting with Altman, the most popular ceiling installation to date is by a team of artists called LUCITO, named Likeness of an Allegory. Located on the 6th floor, at first glance, the thick black molding looks a bit harsh and grim for an office environment.

But the longer you look, the more you begin to realize that cropped images are an upside-down pop-up book. As you move across the floor and adjust your angle, iconic Minneapolis shapes come to light. It’s a fun game of waiting for the elevator like Stone Arch Bridge, Prince’s silhouette or [gulp] the Twitter icon is revealed in chaos.

Many others are more subtle. I especially liked the 3rd Floor Lobby, a work related to the currents and water levels of the Mississippi River at St. Anthony Falls, and the 10th Floor Lobby, designed by Rory Erler Wakemup, designed to mimic the night sky. . Each floor offers something different, full of changing LED details that are worth noting.

â€œThere are different moods,â€ said Altman, describing Christopher Harrison’s 4th floor installation. â€œHere, the artist wanted to create a quiet room, because they are aware of the stress that employees undergo. The 311 is particularly stressful work. You will see in the police floor on the health floor that the goal was to promote employee well-being and create quieter places.

Another key part of the building’s artistic environment is the custom murals on large glass walls in the conference room on each floor. Made from layers of semi-opaque vinyl of different colors applied to the glass walls, they give the rooms an interior-exterior dynamism.

The murals are all different and full of enriching detail, especially their two-sided nature where one side of the wall bursts with color while the other retains a more monochrome effect. The one that most appealed to my sensibility as an urban planner was on the 4th floor, a work called â€œPower and Playâ€ by Witt Siasoco. Taking inspiration from Ralph Rapson’s Riverside Plaza color scheme, it shows a palimpsest of cards, the silhouette of the river, and images of people playing different games.

I also liked the two-part mural by dakota artist Marlena Myles depicting figures around the sacred falls space, and Kao Lee Thao’s mural by a Hmong history cloth artist that adorns the 6th and 5th floors respectively. They are almost enough to make you want to attend a two hour sewer replacement planning meeting.

Taken as a whole, the new building looks a bit like a sci-fi set, taken from movies like Her or Star Trek. The new building has ‘smart’ temperature and lighting controls, and even the artwork hanging from the ceiling looks alive, changing to reveal the humidity or the sunset or the vibe of the city itself. . But as COVID-safe TV screens await members of the public, and a soothing robotic female voice shouts “Now serving T-zero seven four two seven five,” I wonder if this fiction is entirely utopian. .

I really don’t want anyone to have to apply for a building renovation permit or tax assessment gap. But if you do, I recommend that you savor your time in the new civil service building. Replacing a parking ramp, it well deserves its architectural and design distinctions. Walking through the doors on the large carpet, stamped with the san-serif CITY OF MINNEAPOLIS lettering, finally feels like stepping into a brighter future that we all know municipal government can someday become.

MinnPost’s detailed and independent news is accessible free of charge to everyone, without paywall or subscription. Will you help us continue this way by supporting our nonprofit newsroom with a tax-deductible donation today?