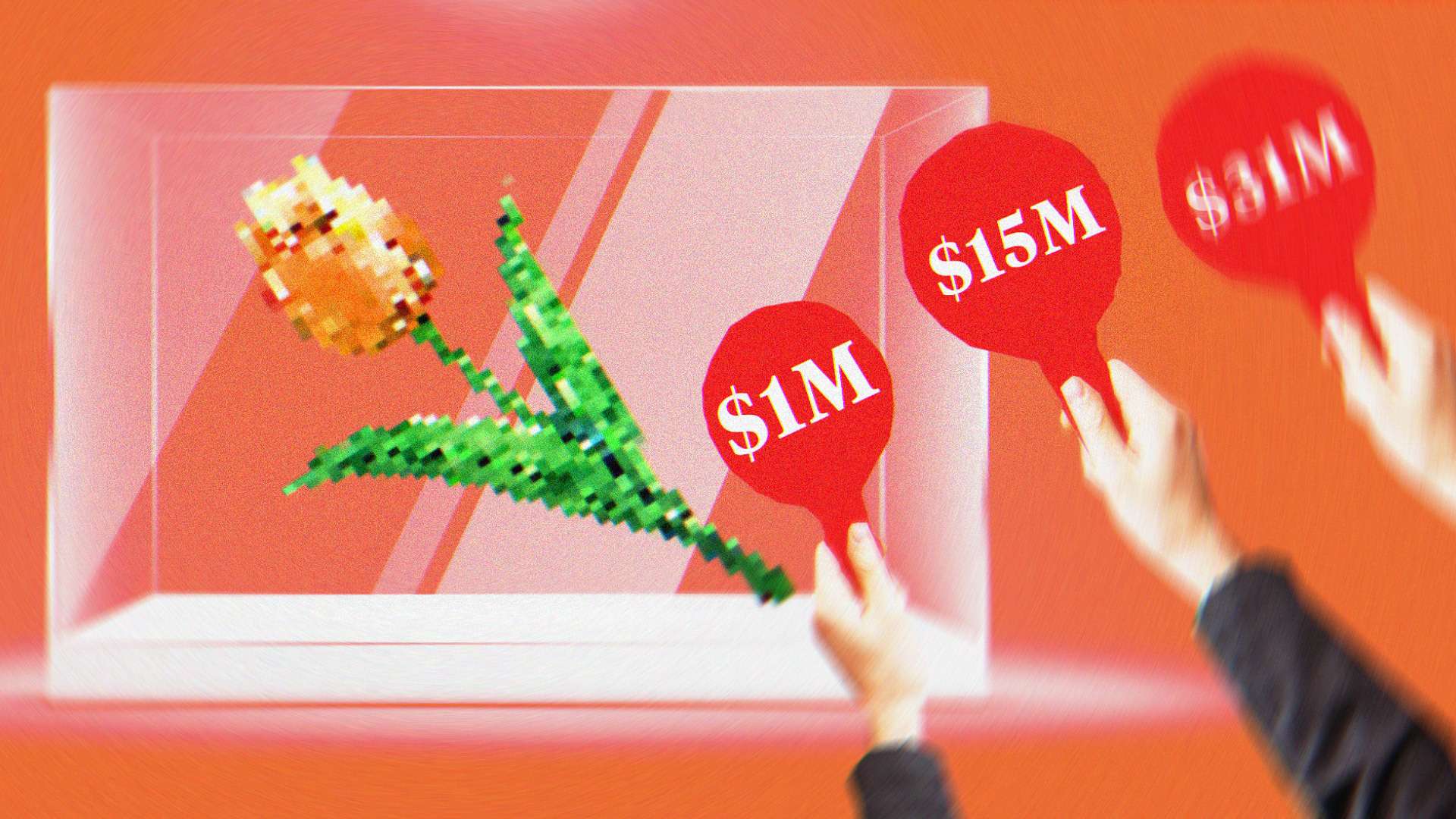 Are NFTs stupid, a scam or secretly useful?

NFT: so hot right now. You may have heard so much about those mind-boggling auctions for weird jpegs on the internet that you’ve had enough by now. For those still on the fizzy side of the hype cycle, “non-fungible tokens” might seem like the answer to online art monetization. For everyone else, NFTs mostly seem like a high-tech way to separate a fool from his money.

And a lot of money is changing hands. A market tracker reports some $500 billion in all-time NFT sales volume across major marketplaces like Cryptopunks, Hashmasks, and Makersplace. But it’s a superstar market. Most NFTs serve no purpose at all, while a few supernovas go superviral (and get very rich).

Beeple, the closest thing we have to an enfant terrible in the NFT art scene, set the record by selling a collection of digital grotesques for (of course) $69 million via an auction run by Christie’s. It wouldn’t be the art world if a record-breaking event wasn’t marred by allegations of self-promotion and possible scam: the proud buyer of EVERY DAY: THE FIRST 5000 DAYSturned out to be Beeple and crypto investor MetaKovan, who had a financial interest in driving up the price of Beeple works and NFTs more generally.

But with numbers like these, it’s no wonder so many people have rushed to literally and metaphorically cash in on this hot new trend. And these days, money is cheap.

Taco Bell sold NFTs. Just like Grimes, worth around $6 million. Professional attention seeker Logan Paul took a break from his Pokéhustle to issue a few million NFTs. The sports, sneaker, and music worlds have all dabbled in NFT magic to try and create buzz and money. Weeks after the craze started, even New York Times tech columnists are trying to pawn their doodles as some sort of new blockchain bling.

How does an NFT work, anyway? What did MetaKovan actually buy for that $69 million in real money? There’s nothing stopping me or anyone else from right-clicking on that rather mundane five-thousand-image blur, saving it, and sharing it with the world. How can one say “to own” an intrinsically non-rival property?

What MetaKovan and the new class of proud NFT owners “have” is the “T” part of the acronym. They own a cryptographic token. The token is unique, therefore “non-fungible”, and associated with specific and verifiable data. The token cannot be split, duplicated, or destroyed (although the owner can easily lose it). Basically, people buy a digital key file which is associated with the artwork or the piece of music or the title deed in a digital space that’s supposed to say to the world, “I own this.”

It sounds stupid. But then again, a lot of the things that other people spend their money on seem pretty stupid. While there can’t be disputes in taste, there can certainly be silly delivery methods to satisfy them.

One of the biggest problems with NFTs so far is that they’ve been pretty logistically impractical. They have actually been around for a long time, presumably since around 2013, but have failed every iteration in part for the following inherent issues. How do you know if the person who sold you an NFT for a job has the “right” to do so? Maybe that Beeple you “bought” is just a copy, and the “real” NFT holder hasn’t sold yet. Who verifies which is “real”?

You might say: Well, look at whichever NFT was purchased first. But suppose an NFT hacker simply got there first (there are entire marketplaces that allow people to “sell NFTs” for anyone else’s content). The “real” Beeple was still working on the process with Christie’s. What you bought was a copy of sketchball. In the longer term, what would prevent Beeple or any other artist from reissuing the same work at a later date, which could devalue your investment? It’s all starting to look very silly.

These conceptual concerns pale in comparison to existing and common concerns execution defects, yet. In many cases, the NFT you just paid a lot of money for might just end up “proving” that you have a broken link. NFTs must point to something. Usually this comes in the form of a URL that leads to a JSON metadata file. If whoever is hosting the URL goes bankrupt or just decides not to host that file anymore, well, bad luck. This association with a broken link is what you “own”. It’s already arrivedand this will likely accelerate as the NFT buzz dies down and more of these markets begin to calm down.

NFT skeptics will almost certainly enjoy their schadenfreude. But that doesn’t mean the concept of an NFT is entirely useless. In many ways, the ongoing NFT mania is just the latest iteration of a cyclical cryptocurrency craze. First, there were altcoins in 2013-2014. Then there were the first coin offerings in 2017. Now NFTs are having their day in the sun.

Yes, there was a lot of nonsense and a lot of scams during each of these fads. But there was also real innovation that somehow got ignored amid the gold rush. Developments in altcoins lead to real improvements in privacy technologies in the form of privacycoins. The initial coin supply boom resulted in “decentralized finance,” or DeFi, which is still being developed and is now seeing integration with the Bitcoin network. NFTs, while perhaps artlessly absurd, can have real value in solving long-standing problems with online identity and address space.

Here is an example of non-dumb NFT: Urbit addresses. Urbit is one of many competitors in the race to build a more decentralized computing infrastructure. To access Urbit, you need something called an Urbit ID. Urbit IDs are NFTs. They are unique, indivisible, persistent and freely traded on NFT marketplaces like OpenSea.

But unlike NFTs for art, Urbit credentials give holders a real function: accessing and participating in the Urbit network. It’s the key to an activity and an environment, not just a fleeting trophy that you spent money on a GIF associated with an IPFS link at some point.

NFT identifiers can provide a more decentralized way to manage address spaces. Like telecommunications theorist Milton Mueller lead the root described, there are entire global multi-stakeholder organizations that have been created to handle identity and online space disputes for things like top-level domains (eg ICANN). Any central authority introduces the potential for control and therefore for conflict; consider the hubbub over the relinquishment of US authority over the management of the Domain Name System (DNS).

With Urbit addresses, there is no “ICANN” to adjudicate on such identity and address resolutions. Addresses have been generated, randomly assigned to early adopters and are now trading on secondary markets. When you purchase the Urbit ID, you get the cryptographic key that establishes and protects your identity with the Urbit system. It authenticates itself. Other examples of NFTs that manage address space include Ethereum Name Service (ENS) and Handshake, which provide ICANN-like functions through a blockchain, and Decentraland, which manages property titles in a digital world as than NFT assets.

In other words, the usefulness of an NFT will depend on exactly what that “T” allows the holder to access. Does the token unlock a useful online feature or property, such as with an Urbit ID? Or does it just point to a random JSON file belonging to an NFT marketplace? If it’s the latter, you might want to save your money for some real old-fashioned art that you can at least hang in your living room.

A good sign that a fad is coming to an end is that it gets the Saturday Night Live treatment. If last week Janet Yellen rap video is one indication, NFTs could very well be on the verge of cultural extinction. But even if you never hear the term “NFT” again in the next few months, it’s a safe bet that the non-fungible token architecture will stick around as a way to manage online address space, this time around. with fewer lolcats.