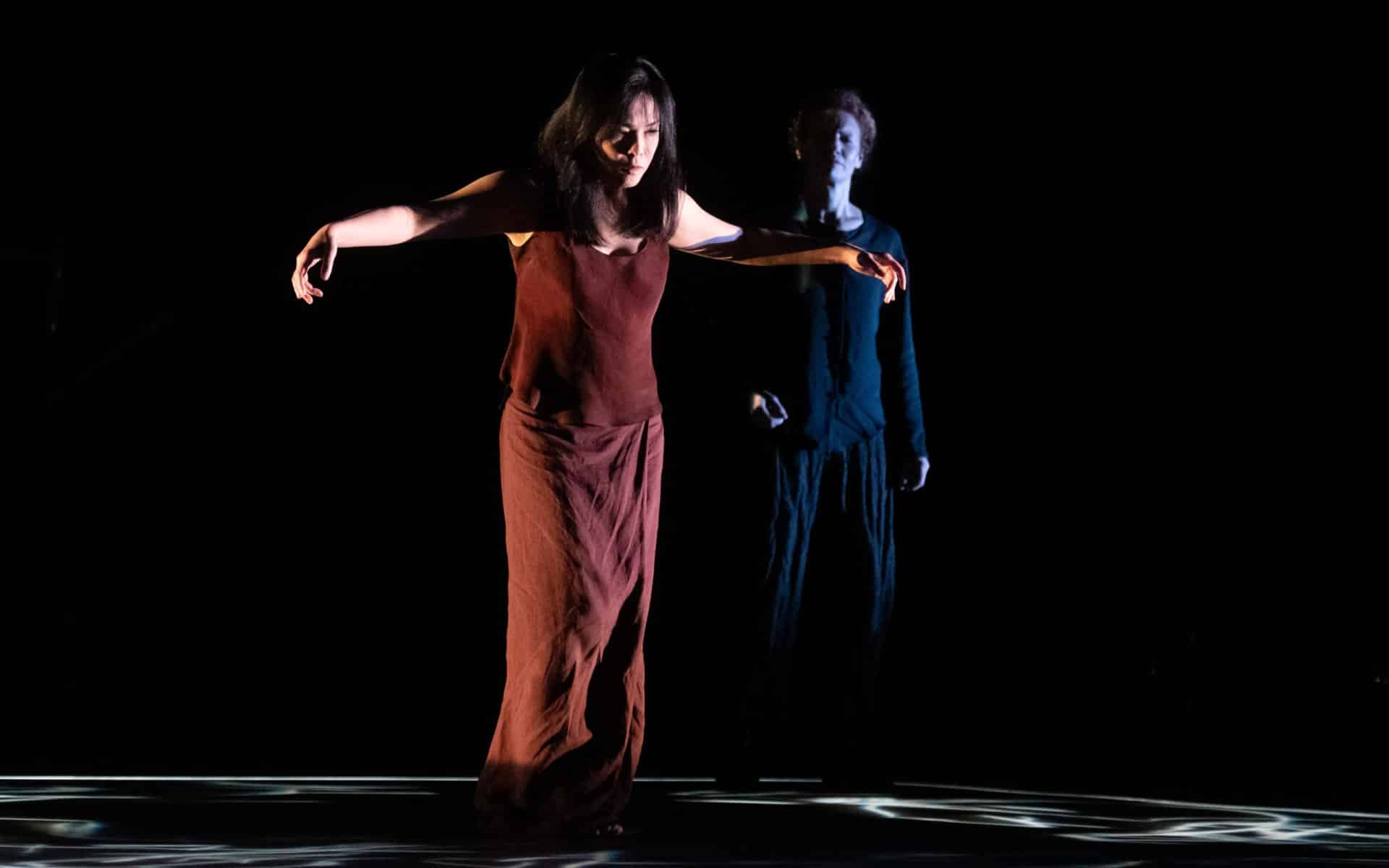 Boy was I wrong, Hanjo is a spellbinding production

New York is a city from hell, like Gabbie, Chip and Ozzie, sailors on the run in the 1949 musical, On the city, kept tapping on it. They haven’t even scratched the surface. Low dives and speakeasys were pretty much their only concern.

In 2022, the Bronx may still be up and the battery down, like the song New York, New York, otiosely reminds us. But seven decades later, there’s still more to discover, making the city one hell of a cultural destination.

In the Frank Sinatra, Gene Kelly’s film of the musical “helluva” has been replaced by “wonderful”. We’ll stick to “hellova”.

One of the joys of Manhattan is that it offers an endless supply of surprising nooks and crannies, hosting a myriad of operas and concerts. It’s not just Lincoln Center and Carnegie Hall. This week, I take readers downtown to the NYU Skirball Theater and downtown to the Park Avenue Armory.

Much more at your fingertips. In the past I have attended The Flea Theatre, 92:Y, National Sawdust in Williamsburg, The Greene Space at Radio WQXR… the list is endless. The wackiest was the Navy Yard in Brooklyn for a Verdi performance macbeth interpreted by The nameless collective. No kidding. I told you it was a hell of a town.

catapult opera claims to launch the future of opera. For Neal Goren, conductor, founder and artistic director of the small company, this is not a vain boast. Hanjo, by Toshio Hosokawa, is so forward-thinking that there is a risk of laceration taking over the program.


Every Saturday:
Read the week’s most read articles on politics, business and geopolitics
Receive exclusive offers and invitations
Plus uplifting cultural commentary

I participated in New York University Skirball – not a minority sport; a benefactor by the name of Jack H. Skirball funded the venue – brimming with skepticism. Based on a Japanese theatrical production Noē, Hosokawa transformed a symbolic story into an opera created at the Festival d’Aix en Provence in 2004. He mixes musical cultures and has created a sound universe of his own. It was the first time I discovered his work. I found it sensitive, engaging and very difficult to pull off. Sounds often turn into whispers. Precise execution is essential. Goren was more than up to the complexities.

The storyline sounds very woo-woo, but it’s not. Inspired by the long-distance love between Hanako, a geisha, and her young lover Yoshio, Hanjo tells the story of Hanako’s dizzying experience when a man calling himself Yoshio finally reappears on the scene after a long absence.

For the Catapult Opera production, the inner life of each of the opera’s three characters was expressed in movement and song by a dancer. In the Noē tradition, the dancer is a narrator who bridges the fourth wall between the audience and the performers. Classical chamber musicians from the Talea Ensemble provided the music.

According to the composer, Hanjo “expresses the fragility of the lives we build in the face of events beyond our control.

On first reading, it struck me as a little less interesting than spending an afternoon watching paint dry on a bathroom wall.

Boy I was wrong. Goren’s company did what many small opera companies do when working reasonably with their limited resources. The singers blasted the music, turning a relatively simple tale into a haunting ninety minutes.

Production was meager. The action took place in a well-defined space, the sets almost non-existent. The dancer/narrator performs on the periphery.

“The singers won it!” Goren had assembled a surprisingly talented cast. Eri Nakamura, a Japanese soprano who sang the lead role in Lady Butterfly in Covent Garden, among many others, was Hanako, the Geisha Girl who was abandoned by her lover. She’s a catch for any great opera house. That Goren persuaded her to play Skirball was extraordinary.

Abigail Fischer, an American soprano and cellist, sang Jitsuko, an old lady who falls in love with Hanako and persuades her to come to Tokyo and move in. at the station as agreed with one of the fans they had traded, will eventually get up and steal it.

When Fischer sang his first lines I sat up straight. What sound. Soprano? No chance. It’s a mezzo, bordering on a succulent contralto. Her voice has a majestic elegance, reminiscent of Janet Baker at her best control. In the lower register, it flourishes. It was a remarkable discovery.

A few days later, I had a drink with Goren at the Century Association. He agreed that Fischer’s voice was remarkable. Goren is exceptionally well connected in the world of opera, hence the quality of the singers he had managed to persuade to perform for Catapult.

Fischer is on a mission, known for her commitment to contemporary music, having premiered works by composers Missy Mazzoli, John Zorn, Nico Muhly and Elliot Carter. Why she insists that her voice is raised in the register is a mystery to me. I wanna hear her sing Elgar’s Pictures of the sea. Now!

Leading the trio was Adam Richardson, a powerful baritone, singing Yoshio. The unreliable lover who had taken Hanako’s fan and given her one in recognition was skating on thin ice. Failing to show up the next day at the station as scheduled, he accused Jitsuko of stealing Hanako from Tokyo. She still went to the station every day to find him. Hitch. Wrong station.

Yoshio’s passionate protest that he had spent time since looking for her was almost convincing. As convincing as Kwasi Kwarteng returning a day earlier from an IMF meeting insisting that there is no problem at the factory. Richardson imbued the role with passion.

This production was absorbing. The movement was undramatic, almost hypnotic, not as artificially stylized as the Noē theater I’ve seen before. The personal dilemmas of the characters, especially Hanako, were beautifully illustrated.

And when she finally rejected a life with Yoshio, preferring her obsession with unmet expectations, audiences were faced with a reality. We in our hashtag-obsessed world often prefer alternate realities as well.

Goren and Catapult Opera are now on my watch list. If he continues with such well-crafted productions and plunders his contact list of high-profile singers, this innovative little company is poised to produce even more wonders.

Downtown, in the fabulous performance space of The Park Avenue Armory, an 1880 Gothic Revival red-brick building that once housed the Seventh Regiment, a different scenario was playing out.

The much-vaunted composer Tyshawn Sorey, a specialist in atmospheric music, attempted to recreate the ambiance of the Rothko Chapel in Houston. On the walls of this chapel hang fourteen paintings by Mark Rothko. All Black. With the slightest variations in tone.

Sorey wrote a work that goes with it. Ninety minutes of repetitive and resounding music. All atonal. With the slightest variations in tone. He wrote the piece as a tribute to Morton Feldman, a member of the John Cage musical terrorist gang, destroying eardrums and driving folk crazy in the 1970s. Feldman wrote his own Rothko Chapel funeral dirge in 1971.

Why critics treat composers like Cage, Feldman and Sorey with reverent solemnity is beyond me. Cage – infamous for his 4’33”, a piece that contained no music – also wrote pieces based on selecting notes from the I Ching, an ancient Chinese divination text. Monkeys on typewriters.

But produce this straight-faced drivel, backed by a shell of political correctness, and the usual sycophantic suspects crumble. Except, for Alex Ross, music critic of the New Yorker: “In a space of abyssal immobility, Tyshawn Sorey conducted his new work”. It sounds like praise, but an observation completely devoid of comment. A Ross pump.

The American public is polite. Tolerant of all kinds of guffs. But, as I watched an increasing number of people apologizing and slipping away into the night, it was clear that tolerance levels had been exceeded. Sorey had been suspected.

The Rothko Chapel was represented by a circle of huge, raised, wildly abstract canvases by artist Julie Mehretu enveloping the audience in a circle. Sorey, his percussionist, keyboardist and violinist occupied the middle space.

In a circular gallery below the canvases, above the audience, ballet dancers performed spectacular but seemingly unconnected movements in front of and sometimes, in shadow, behind the paintings. It was impressive, but what was the point? A prodigious figure walked about, going in and out, up and down, chanting. Wow!

Peter Sellars, the infamous wild child of operatic productions, directed the show. The shock of the opera was at its unfathomable worst.

Like a group of celestial voices from the 60s, the Trinity Wall Street Choir lurked in high darkness, singing from time to time.

You can’t win them all. But Armoryville Horror just made Neal Goren Hanjo stand taller. So many choices in this city of contrasts. New York, New York.

Your technology is getting greener, but is it making a difference?