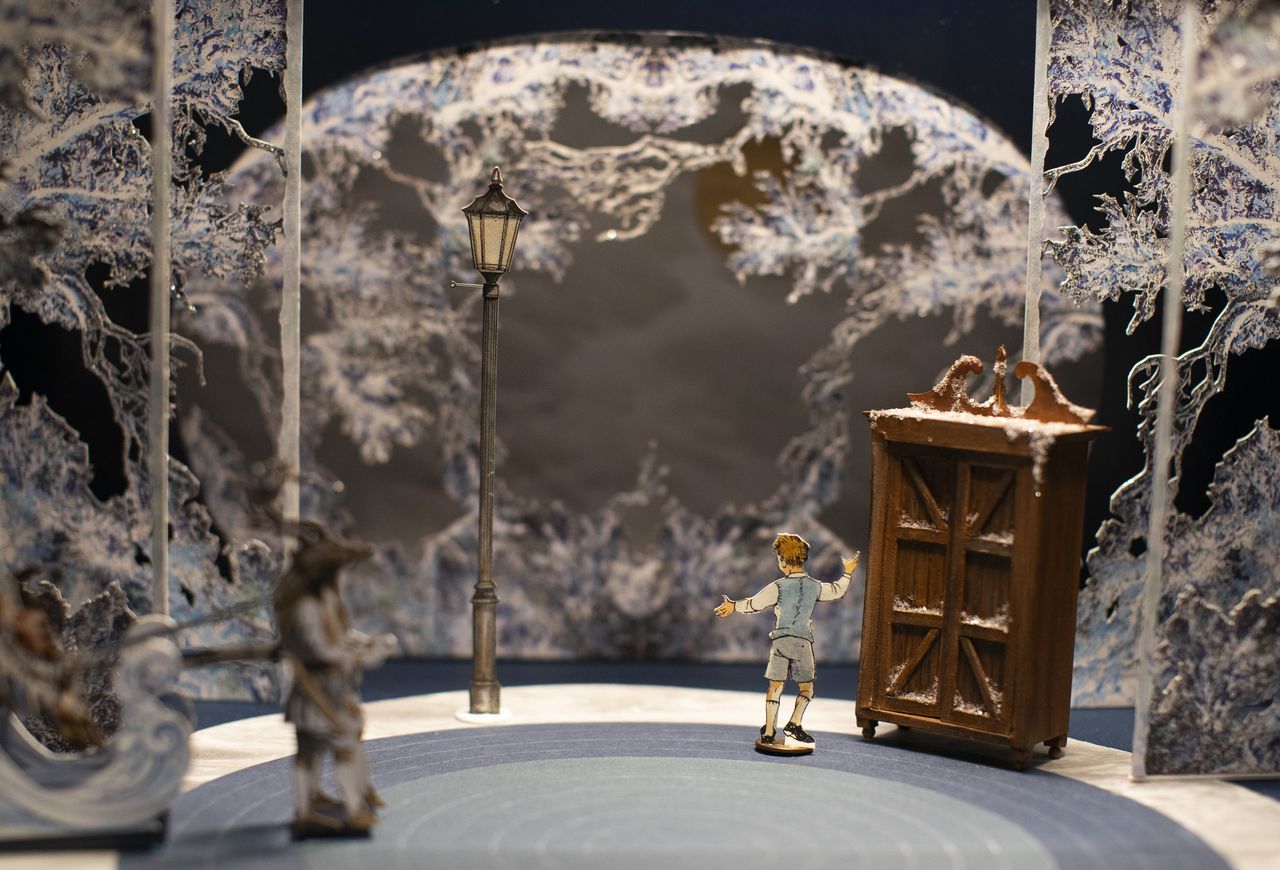 Carey WangTheatrical sets are anything but static, as a new retrospective of his four-decade career as a set designer shows.

Here’s how he describes his setting for Seattle Children’s Theater’s 2004-2005 production of “Sleeping Beauty,” in which the enchanted Briar Rose and her attendants lie in a giant gold-colored picture frame: “This picture frame slid up and down and it had landscape within it. So it might change the scene. And then other things flew past him. Like the notorious brambles that protected Briar Rose from all but the most determined suitor.

For a children’s Seattle production of “The Lion, the Witch and the Wardrobe,” which the company mounted twice in the early 2000s, Wong used sliding, staggered filigree panels to create a similar layered effect. . “I like the watermark,” he says. “I like the idea of ​​creating something transparent.”

Then there was the set he designed for the Portland Opera’s 1980 production of “Don Giovanni,” which was themed around the Day of the Dead. Pointing to a model of the set, Wong says, “This unit started out as a neutral Spanish Colonial facade. And as the show progressed, shutters and things were removed to reveal this more religious aspect of the mausoleum.

It seems like her work has a theme of layers and reveals things gradually.

“In some ways, that’s what life is,” Wong says. “We don’t get to see the whole picture at the very beginning. The appearance of something is what you initially perceive, but as you get to know it and live with it longer, your understanding of it deepens and enriches.

“I think that’s what I want my designs to do. They don’t reveal everything at first, but they slowly reveal themselves to the audience as the show progresses.

The new exhibition “Carey Wong: The World Transformed” offers visitors a chance to see this design philosophy up close. Installed throughout Portland Chinatown Museumthe exhibit features 16 ensemble designs that are among Wong’s favorites or had “something interesting about the design process that seemed like it could be explained well in an exhibit like this,” he says.

The text panels, which Wong wrote himself, are worth reading, as they offer invaluable insight into Wong’s approach. Take to the setting of Tacoma Opera’s 1999 production of “Madama Butterfly,” a 1904 opera that became a lightning rod for questions about cultural appropriation and controversies over the casting of non-Asian actors. Wong created a subversive design that deliberately uses Japanese motifs incorrectly to suggest Western misunderstanding. For Butterfly’s house, he installed shoji screens whose backs can be removed to let the structure look like a cage.

Five of the featured sets are from productions that include the work of Asian American playwrights or authors, such as David Henry Hwang and Linda Sue Park. Wong, who is Chinese-American, says his work on such productions has mostly come about by chance. “Just in part because of the repertoire of plays that are featured, there hasn’t been a huge number of Asian American titles that have been available to produce,” he says.

But he is looking forward to a few Asian American projects on his plate. “And I made it known that I would like to be associated with other projects like this,” he says.

Wong is associated with an Asian American project outside of the theater world that now sits just steps away from his retrospective: the Portland Chinatown Museum’s permanent main exhibit, “Beyond the Gate: A Tale of Portland’s Historic Chinatowns.” .

Wong designed “Beyond the Gate” for its 2016 debut at the Oregon Historical Society, then reworked it for the Chinatown Museum’s opening in 2018. For him, the exhibit was personal: Although he is now based in Gig Harbor, Washington, he grew up in Portland’s Chinatown – his grandparents opened a long laundry a block from where the museum now stands – and he and his family were involved in the foundation of the museum.

“He was really an integral part of the early years of this space and made it the success that it was,” says the museum’s executive director, Anna Truxes.

Truxes, who has come to the museum from the art world and seen her fair share of exhibitions, said of Wong’s retrospective, “I never expected how absolutely thrilled I would be when I saw it. would see materialize. They are boxes of creativity and so joyful.

“I’ve seen a few people come to the preview before,” Truxes says the day before the exhibition’s opening reception, “and instantly their body language changes. You can just see a spring in their step. But it’s also that there’s such a connection to the history of the museum itself, its founding, as well as Chinatown and the family ties to the neighborhood. So it really is a great moment for the museum.

“It’s a chance for the community to celebrate.”