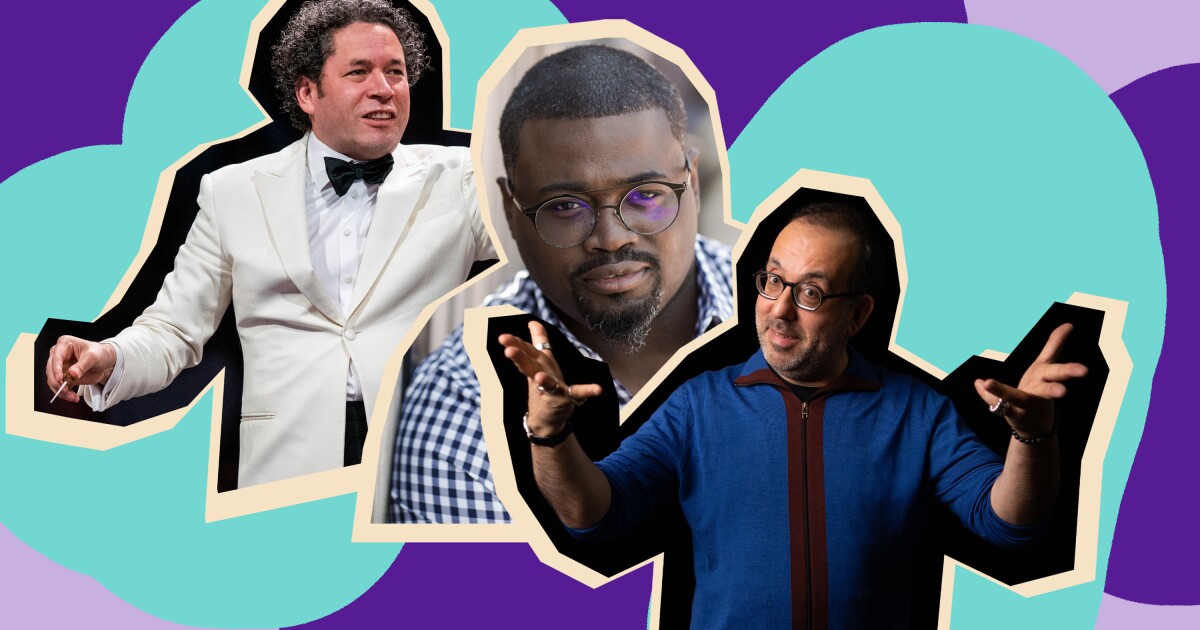 Commentary: The faces and facets of the year of the emergence of classical music

We are not butterflies, winged and free, of all splendor, released from our pandemic chrysalis. After our arts 2020 Annus horribilis, we predicted the bursting of festive champagne corks and the explosion of fireworks by the end of 2021. That fantasy has been replaced by the reality that every step must be taken with care and that not all steps are taken. can not go ahead. The rally remains a negotiated set of risks, even more so now with the unpredictable rise of the Omicron variant.

Yet we are emerging. And in an encouraging number of cases, we have done it in glory, thanks to the many extraordinary firsts who made this possible. Here is some of what they have brought to us indoors, outdoors, in our garden, in the world and in the digital afterlife.

CALIFORNIA EMERGING DRIVERS. It has been an exceptional year of emergence for conductors from and on the West Coast. Gustavo Dudamel reached new heights as a conductor over the summer as he brought the Los Angeles Philharmonic back to a public performance at the Hollywood Bowl, then opened the orchestra’s fall season at the Walt Disney Concert Hall. He also started what appears to be a revolutionary musical direction of the Paris Opera with the production of Robert Wilson’s “Turandot” this month. He was the perfect candidate to win a Grammy for his LA Phil Ives Symphony Cycle and, of course, he did.

LA Phil winner Esa-Pekka Salonen indicated early on that he would bring some groundbreaking thinking about what an orchestra can and should be in the Bay Area as the new musical director of the San Francisco Symphony. His new Clarinet Concerto premiered yesterday in Helsinki, but without the direction of Salonen: although asymptomatic, he tested positive for COVID-19. Meanwhile, with remarkable resilience, former SFS Music Director and LA native Michael Tilson Thomas quickly emerged from successful surgery for a brain tumor and subsequent chemotherapy to conduct the New York Philharmonic beginning of November. This program included Berg’s Violin Concerto with Gil Shaham. Their SFS registration is one of the big releases of this year.

Throughout the pandemic, Californian of origin Kent Nagano has been an active presence in Europe. His work includes a revealing cycle “Ring” on period instruments with Concerto KÃ¶ln (which is archived on the Dutch radio station NPO Radio 4) and the output of orchestral works by Messiaen; it is another of the most amazing orchestral recordings of the year.

It is also the year in which Venezuelan conductor Rafael Payare, who dramatically rejuvenates the San Diego Symphony Orchestra, adds a prestigious second musical direction, succeeding Nagano at the Orchester symphonique de MontrÃ©al. And the new African-American conductor and Lakewood native, Ryan Bancroft, has made waves far from home as the first American conductor of the BBC National Orchestra of Wales and, as of this month, musical director of the Royal. Stockholm Philharmonic.

EMERGING DIVERSITY. Bancroft was far from alone. It is also the year when black conductors and musicians have rightly been more prominent in classical music groups. In January, the Los Angeles Opera named black tenor Russell Thomas its final artist in residence. And when the company came out of the pandemic this fall, it did so with main productions of Verdi’s â€œIl Trovatore,â€ Wagner’s â€œTannhÃ¤user,â€ and Rossini’s â€œCinderellaâ€ – all of which featured black singers in the show. main roles. San Bernardino Symphony Orchestra Music Director Anthony Parnther has made impressive appearances with the Los Angeles Philharmonic and in the new Jacaranda musical series, as has Berkeley Symphony Orchestra Music Director Joseph Young, on his debut with the Pasadena Symphony Orchestra in a concert that also featured the radiant youngsters – and yet another SoCal native – black violinist Randall Goosby, whose Hollywood Bowl debut was a highlight of summer.

In 2021, many worthy orchestras in America received the message that it is essential to play works by young, spirited and provocative black composers like Jessie Montgomery and Carlos Simon. The LA Phil added Kris Bowers as one of three composers who hosted their ‘Reel Change’ film music festival, and the Metropolitan Opera finally staged their first opera by a black composer, ‘Fire Shut Up in My Bones â€, by Terence Blanchard, composer, trumpeter and Kenny Burrell Chair in Jazz Studies at UCLA. Equally important, the year provided a major boost to three senior black composers – George Lewis, Anthony Davis, and Wadada Leo Smith – who have long been among America’s most profound, progressive, empowering, and influential voices for decades, but who have not received much from the establishment.

FRANK GEHRY STILL EMERGING. After celebrating his 92th birthday in February, the architect of the Walt Disney Concert Hall has already experienced several lifetimes of emergencies. Despite this, Gehry’s modest but wonderfully luminescent design for the new Judith and Thomas L. Beckmen YOLA Center in Inglewood which opened in the fall is fast becoming a transformative example of how the education program LA Phil music changes lives. At the other extreme, the year ended with the finishing touches on Gehry’s the Grand, opposite Disney. It couldn’t be more grand, and, once its proposed concert halls in Colburn are built, it will be ready to complete the transformation of Grand Avenue into the nation’s dominant arts center and far beyond.

EMERGING RADY SHELL. When the San Diego Symphony’s open-air concert hall opened in summer, it must have felt like stepped out of the sea. On the downtown shore, the new space-age hull overlooks the harbor (and sometimes surprises the horns of its ships with a nice atmospheric effect) and draws a lot of inspiration from the Hollywood Bowl, especially a similar audio system. Payare opened the orchestral season with Mahler’s first symphony in the Rady Shell rather than his less welcoming concert hall, and it turned out to be an exciting affair.

NEWLY EMERGING BARRIE KOSKY. Regardless of the Australian opera director’s international presence, his resignation this year as head of Berlin’s Komische Oper places him more directly on the world stage. He proved that already in 2021, evident in the livestreams of the Bavarian State Opera (a wonderful â€œDer Rosenkavalierâ€), Aix-en-Provence (a hilarious â€œFalstaffâ€) and, this month, the Opera National Vienna (a shocking “Don Giovanni”). Kosky’s revealing and stripped-down production of “West Side Story,” an antidote to Steven Spielberg’s new film, arrives in Strasbourg in May, courtesy of the OpÃ©ra National du Rhin.

EMERGING SUPPLEMENTS. Much of the digital content necessitated by the lockdown turned out to be a necessary but unsatisfactory stopgap for live performance. But what’s also popped up on the websites of many art institutions worth keeping are all kinds of extras, much like the extras you get on Criterion Collection’s personal video. These can be instructional videos or podcasts (ideal to listen to in the car on the way to performances) or full-fledged short films. It took practice to get it right, and two of the latter just happen to be the best – the captivating Carlos Simon “The first blue bird in the morning” one of LA Opera’s “On Now: Digital Performances” and Dudamel’s striking rendition of Mahler’s arrangement Beethoven String Quartet “SÃ©rioso” on “Sound / Stage” by LA Phil. Both performances enhance, rather than distract, musical vision.

“ORLANDO”. Austrian composer Olga Neuwirth’s fabulous “Orlando”, a spectacular trans version of Virginia Woolf’s novel and the first grand opera by a woman in the history of the legendary Vienna State Opera, shocked Viennese in their boots traditional opera with its burst of sexuality and liberal political advocacy. But this month, Neuwirth – whose operas include a based on David Lynch’s film “Lost Highway” but which has little presence in the United States at the moment – received the Grawemeyer Prize of $ 100,000 for “Orlando “, while ensuring more performance.

THE REEMERGED PIANO. After spending the last two decades in Europe, Thomas Mann’s piano returned to the Nobel Prize-winning German author’s Pacific Palisades home, today a cultural center. The comeback in October was marked by a creepy recital by pianist Igor Levit, himself a great pandemic emergent via Zoom gigs and live gigs, which made the Thomas Mann House a beautifully haunted house hosted by the ghosts of the German THE community of past emigrants.

NOSE COMING OUT OF THE MASKS. Concert life began to return in the second half of 2021, with stringent vaccination and mask requirements as a way to attract nervous audiences. It worked well but not perfectly. As autumn draws closer to winter, more and more masks in theaters have started to fall at lip level and even below. With a winter wave likely, may we do some New Years mask resolution.

MUSIC UNDER THE ACADEMY MUSEUM. The new Academy Museum of Motion Pictures is open to the huzzahs of fans and critics of film and architecture, but not to us musicians. The academy, incredibly, has left out an exhibition dedicated to film music.

THE IMPERMANENCE OF EMERGENCE. Three new music giants, who together transformed the idea of â€‹â€‹music as we know it, have passed away this year. They were FrÃ©dÃ©ric Rzewski, Louis Andriessen and Alvin Lucier. Their lives have been long, and what will surely emerge is a growing appreciation for the huge body of essential music they have left behind. As proof, a radiant harpsichord solo by Andriessen and a shimmering triangle solo by Lucier recently appeared in Disney programs. Piano Spheres has planned a tribute for Rzewski in February.

UBOXSEA has partnered with Mobius Wars to unlock NFT game