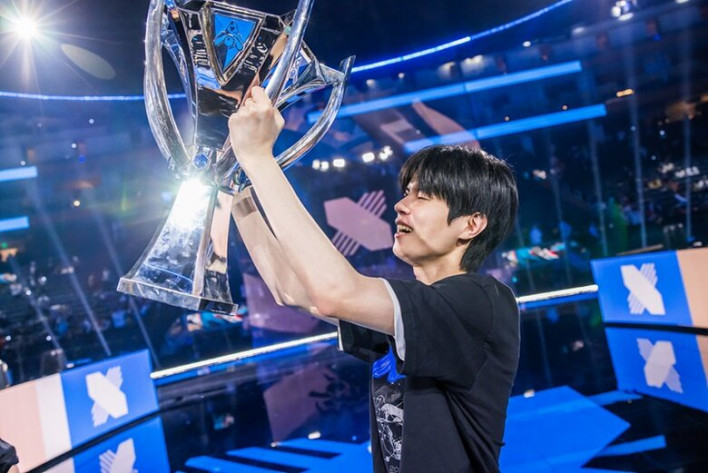 3,505 days. It’s about 10 years. How many people could dream of the same thing for so long? Much less not giving up in the process and ultimately achieving that goal?

For a very long time, the Summoner’s Cup almost seemed like a mirage to Kim “Deft” Hyuk-kyu. However, that dream came true when he won the Summoner’s Cup and became World Champion. So many doubted he could pull off the miracle run in his seventh Worlds appearance, but in the end Deft finally managed to climb to the top. Everyone chanted his name and Deft shed tears in return.

And with it, Deft finally managed to complete “The Exodia”. From becoming champions in the LCK, LPL, to MSI, to Worlds, this is the story of how Deft collected all the pieces of Exodia.

His LCK debut came on April 3, 2013, when the LCK was still known as the “Champions”, under the leadership of MVP Blue. [which later became known as Samsung Galaxy Blue, or Samsung Blue for short], a team he first joined on February 19, 2013. Back then, he was known as the rookie with immense potential, but he couldn’t tap into it in his freshman year. Except when he was on Ezreal.

However, having acquired the knowledge and experience of playing in the pro scene, he started to really show what he is capable of a year later, in 2014 Champions Spring, on mechanical champions like Ezreal, Kog’Maw, Twitch and Lucian, he defeated CJ Entus Frost in the quarterfinals, his sister team, MVP Ozone [Samsung White]and Najin Shield in the final, winning their first national title.

After a successful 2014 season for both Samsung teams, the infamous “LoL Exodus” took down all Samsung players. Along with his former teammate, PawN, he has found his new home in the LPL, under EDG.

It only took Deft two years to rise to the top of the Korean professional LoL scene; it didn’t take long for Deft to find their form in the LPL and rise to the top. After Week 4 of the 2015 LPL Spring Split, EDG held the No. 1 spot in the standings. Not only did he defeat Imp in the split final, but his infamous pentakill on Sivir was in game five of this series, winning his first LPL title and becoming a ‘Royal Roader’ in the LPL.

With their championship victory in the 2015 LPL Spring Split, Deft and EDG headed for participation in the Mid-Season Invitational that year, their second international tournament of their career.

EDG proved they were the top dogs in the LPL that year, so naturally they were also top contenders to win the MSI. EDG has proven itself with actions rather than words. While they occupied 2nd place in the group stages after losing against SKT T1, they took their revenge in the final and won the MSI trophy. On a champion that Deft then went on to achieve an insane win rate, Jinx, Deft, and EDG claimed their first MSI title.

After finishing second in the Spring Split that year, Deft meets his new teammates, Scout and Mouse, on EDG. This led to Deft’s second LPL title of his career.

At the time, Deft was tearing it up in solo queue, and that form showed in his matches as well. It seemed that his rise to form accelerated during the Spring Split to reach its peak during the Summer Split. Once EDG’s new top and midfielders finally got rid of the team’s weaknesses, EDG looked unstoppable, which led to an undefeated split. It should also be noted that Deft’s performance that year also earned him the ‘Player of the Year’ award in the LPL.

In 2017, Deft returned to the LCK, under kt Rolster. Including Deft, the team was full of legendary names within the LCK, which led to many dubs of KT, ‘The Superteam’. However, LCK proved much more difficult for Deft, ultimately failing to make it to Worlds and wrapping up their 2017 season.

During this time, many blamed him for having a weak mentality, as he seemed to underperform when it really mattered. That momentum continued until the spring of 2018, where he proved to be the carry player during the regular division, but died out during the playoffs. However, he turned things around in the summer split that year, where he returned from spring with a rock-solid mentality alongside his jaw-dropping carrying ability. Deft led their team to the final that year and managed to win their second LCK title.

Many, including himself, have said that 2022 could potentially be Deft’s last competitive year, largely due to mandatory military service for Korean men. No one even expected DRX to make it to Worlds, but after pulling off some huge upsets in Regional Qualifying, Deft made their seventh appearance at Worlds.

DRX was LCK’s No. 4 seed, so naturally no one paid that much attention to them. Not only did everyone see them as championship contenders, but many saw them as a lower tier than other LCK teams at Worlds. Due to Deft’s underperformance in the Summer Split, many wondered if they would be able to compete with other international teams. Unexpectedly, however, Deft and DRX went from everyone doubting them to lifting the Summoner’s Cup.

For Deft, it took 10 years to realize his dream of becoming world champion. He never gave up once in this process, and he finally crossed the finish line he wanted. The story of Deft had more anime plot armor than the anime itself, and for LoL Esports fans, it will be telling for many years to come.