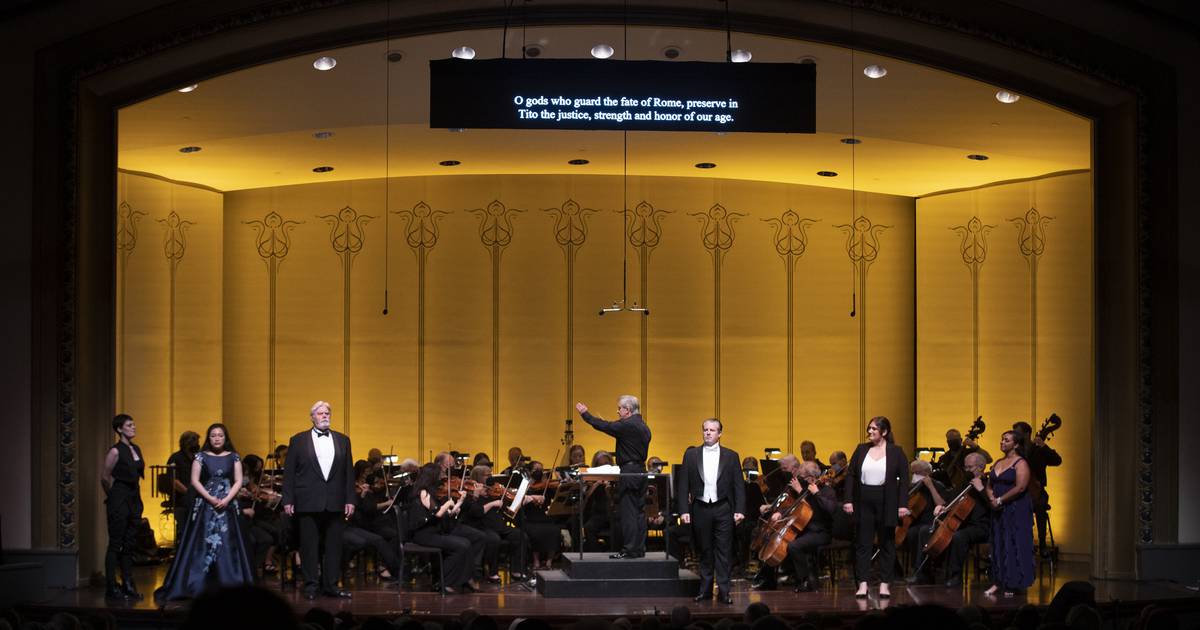 Conlon and CSO in ‘La Clemenza di Tito’ at Ravinia

The thing about the good old days is that they don’t last.

Ten years ago, when James Conlon conducted his “Mozart in the Martin” series as Ravinia’s musical director, these concert operas – performed by the best talent on the international scene and the Chicago Symphony – displayed the 850-seat Martin Theater.

You’d think Mozart and Conlon, who have been warmly welcomed here since his 2015 resignation, would be a winning combo. You would be right. But winning combos don’t fill seats, especially when an unknown piece is on the marquee. ‘Don Giovanni’ – boasting a stacked cast despite the day of losses to illness – played at three-quarters capacity on Thursday; for Friday’s “La Clemenza di Tito,” attendance dropped to about a third. Maybe, just maybe, it had something to do with ticket prices being $140 a pop at the theater.

Somewhere, Mozart knowingly mocks. The story of his “Tito”, the last opera he wrote, is itself inseparable from class, high expectations and nostalgia for a bygone era. In 1791, Mozart was working on “The Magic Flute” when an impresario at the court of Leopold II, having already commissioned Mozart once for “Don Giovanni”, offered the composer double his usual fee to compose an opera for the coronation of the Emperor as King of Bohemia. . The impresario decreed that the new work would be a opera series – a genre already out of fashion when Mozart tackled it earlier in his career – and be set to “La Clemenza di Tito” by librettist Pietro Metastasio.

In Metastasio’s account, the benevolent Roman emperor Tito (or Titus, according to his real-life analogue) dodges an assassination attempt by his friend, Sesto. Unbeknownst to Tito, the real mastermind of the plot is Vitellia, embittered by the Emperor’s romantic rejections and all too willing to manipulate the infatuated Sesto for revenge. As the title promises, Tito eventually forgives them both, though meeting at the bacchanalia was probably pretty awkward afterwards.

Imagining Mozart switching to the austere “Tito” of his effervescent “Magic Flute” is enough to cause a secondary boost. Given the work’s unusually mixed reception, it is highly likely that Mozart felt the change as well. ‘Tito’ sometimes sounds as if Mozart himself was unconvinced by Metastasio’s musty libretto (albeit slightly refreshed by writer Caterino Mazzolà). “Tito” remains the least staged of Mozart’s late operas: Lyric had its first performance in 1989, plus a redux in 2014, and LA Opera followed suit with a company premiere in 2019 under Conlon’s direction. .

Conlon’s “Tito” gig collided with Lyric and Los Angeles actors. Matthew Polenzani reprized his first role as the title character in the production of Lyric in 2014; he has since sung Tito at the Met. Sopranos Guanqun Yu (treacherous Vitellia) and Janai Brugger (as scene-stealing as Servilia as she was the night before in “Don Giovanni,” singing a last-minute Zerlina) are alumni of the 2019 Los Angeles production . Mezzo-soprano phenom Emily D’Angelo (Sesto) already landed two huge “Tito” engagements in her twenties, singing Sesto at the Royal Opera House and Annio in the same Met production as Polenzani.

They are voices accustomed to the greatest opera stages in the world. Thankfully, most of the “Tito” leads did shift their voices to the less grandiose dimensions of the Martin Theater, certainly more overall than “Don Giovanni” the night before.

Polenzani was the exception, his stentorian voice often overtly so. At first, this audacity typified the one-dimensional trope of the “enlightened despot” that “Tito” audiences have found obsolete for centuries.

That changes in the second act. In the opera’s climactic scene, Polenzani bends down to beg – no, beg – the captured Sesto to tell him something, anything that would convince him to call off the execution. The young man, faithful to Vitellia to the end, refuses, asking the emperor to remember their friendship as it was (“Deh, per questo istante solo”). As D’Angelo sang, Polenzani rocked from foot to foot like a desperate child trying not to cry.

Polenzani’s dominating performance clicked at that moment. This is Tito – the breakable human who emerges when no one else is in the room. As the opera didactically explains, Tito only accepts his power when he embraces his vulnerability. “If a hard heart is necessary for a ruler, take the empire from me or give me another heart,” says Tito, Polenzani extracting particular angst from this line in “Se all’impero.”

D’Angelo wasn’t such a slow burn, his Sesto coming out of the gates as a production highlight and staying there. Her sweet voice vibrated in all registers; if its lower parts were autumnal, it was a New England autumn, blazing with a luminous tempera intensity.

Yu was also particularly compelling as the object of Sesto’s affections. In a sea of ​​witch-like Vitellias, Yu made her incredibly lovable – in other words, it was almost worth committing aggravated arson. His Vitellia’s greatest weapon was not dagger fury but bubbling tears, a rendition nicely complimenting Yu’s own rounded and pleasingly supple soprano.

As Annio, Servilia’s beau and another pants role, bell-shaped mezzo Ashley Dixon contrasted nicely with D’Angelo’s darker register. Woody-voiced bass Kristinn Sigmundsson – an MVP of “Mozart in the Martin” as Commendatore of Publio and “Don Giovanni” – gave the Roman officer more depth than Metastasio and Mazzolà’s libretto, the portraying as a world-weary counselor to the still -Tito Green.

We wish Brugger had more of a chance to shine as Sesto’s sister, Servilia, the opera’s other soprano role. Nonetheless, she seized upon Servilia’s business card tune with authority, tearing Vitellia for her tearful inaction towards Sesto’s phrase (“S’altro che lacrime”). In Brugger’s eloquent and urgent performance, Servilia’s plea is impossible to ignore – and indeed, Vitellia heeds it at the very last moment, confessing her part in the scheme to save Sesto.

All that luster doesn’t quite answer the million-dollar question: Did this production make the case for “Tito,” as so many houses have tried to do over the past few decades? Conlon certainly did, leading a looser performance than the previous night’s “Don Giovanni.” Director Harry Silverstein didn’t, his no-frills presentation lacking compared to the zippered prop and use of space in Garnett Bruce’s “Giovanni.”

The backing musicians were also divided. Clarinetists Jonathan Gunn and Wagner Campos were impressed by acrobatic solos originally written for Anton Stadler, for whom Mozart composed his quintet and clarinet concerto the same year as ‘Tito’. Throughout the evening, harpsichordist Louis Lohraseb imagined stylish and catchy recital performances. As a chorus, however, Chicago’s Apollo Chorus, otherwise a fine ensemble, sounded pale and disjointed in this context.

Newcomers to “Tito” – and they should be more numerous than met in the Martin on Friday – will also be broken on the merits of the work. But this nostalgia trip is absolutely worth hearing. With a sticker price down to $60 internally for Sunday’s final performance, so should you.

Hannah Edgar is a freelance writer.

The Rubin Institute for Music Criticism helps fund our coverage of classical music. The Chicago Tribune maintains editorial control over assignments and content.