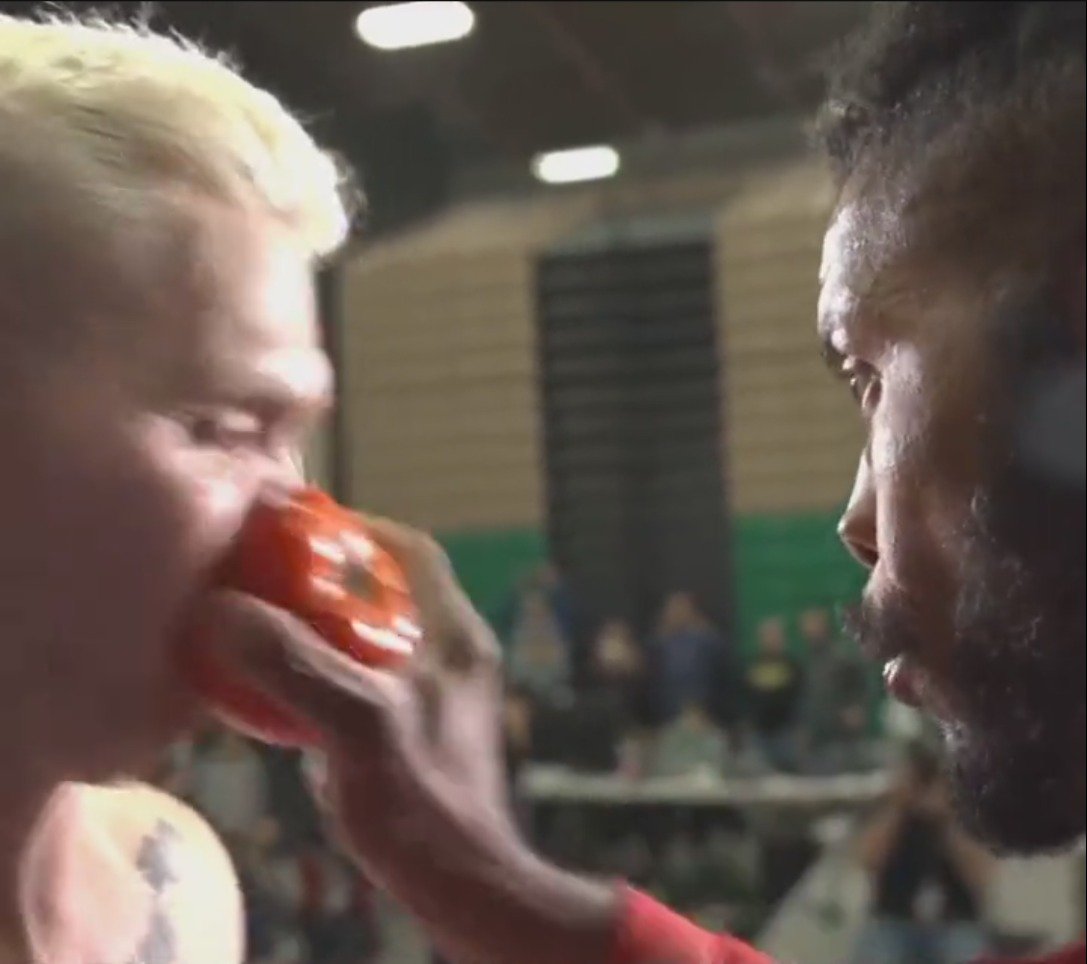 We saw all sorts of things happen at the weigh-ins, however, the ceremonial BKFC 24 showdowns that took place on Friday were interesting to say the least. Light heavyweight champion Lorenzo ‘The Juggernaut’ Hunt was scheduled to face challenger Joe Riggs. Things got wild when Hunt smashed a half-eaten tomato in his opponent Riggs’ face.

Hunt brought a tomato as a prop for the face-off. He started biting into it and then shoved it in Riggs’ face. It erupted into a fight and the two had to be separated immediately before things escalated further.

Riggs looked shocked and angry as he called Hunt “f**king c**t”. Hunt didn’t seem bothered and was seen laughing before continuing to pose for the cameras in the crowd.

This incident was truly bizarre and so fans on Twitter were quick to react.

Twitter fans were quick to react to this video. It seems most of them weren’t fans of what Hunt was doing. They reacted with disgust and their tweets prove it.

It’s just rude. In fairness, Riggs should have been wary of the man munching on a tomato during a confrontation.

😭 disrespect oh that should be a real good fight

this guy is grossly arrogant. it’s gonna be hilarious if he gets knocked out

What a punk movement!! Come on Joe bust that nogging guy!! You have to teach him respect!

UFC middleweight title contender Paulo “The Eraser” Costa also reacted to the clip on Twitter. He hilariously tweeted, “When someone has an eye on my snack”.

Riggs, an experienced fighter with over 40 career wins, will face Hunt, who is coming off a 4-fight winning streak at BKFC. The former UFC fighter will have a lot to prove as he enters this fight as an underdog. Winning this title will bring Riggs’ career back to a high and put him back in the spotlight.

Saturday night couldn’t have come sooner. Can Riggs end Hunt’s winning streak, or will he be another pawn to fall? What did you think of this incident? Let us know in the comments below.

Futuristic home in a quiet, leafy street in sought-after Selly park on sale for £1.5m