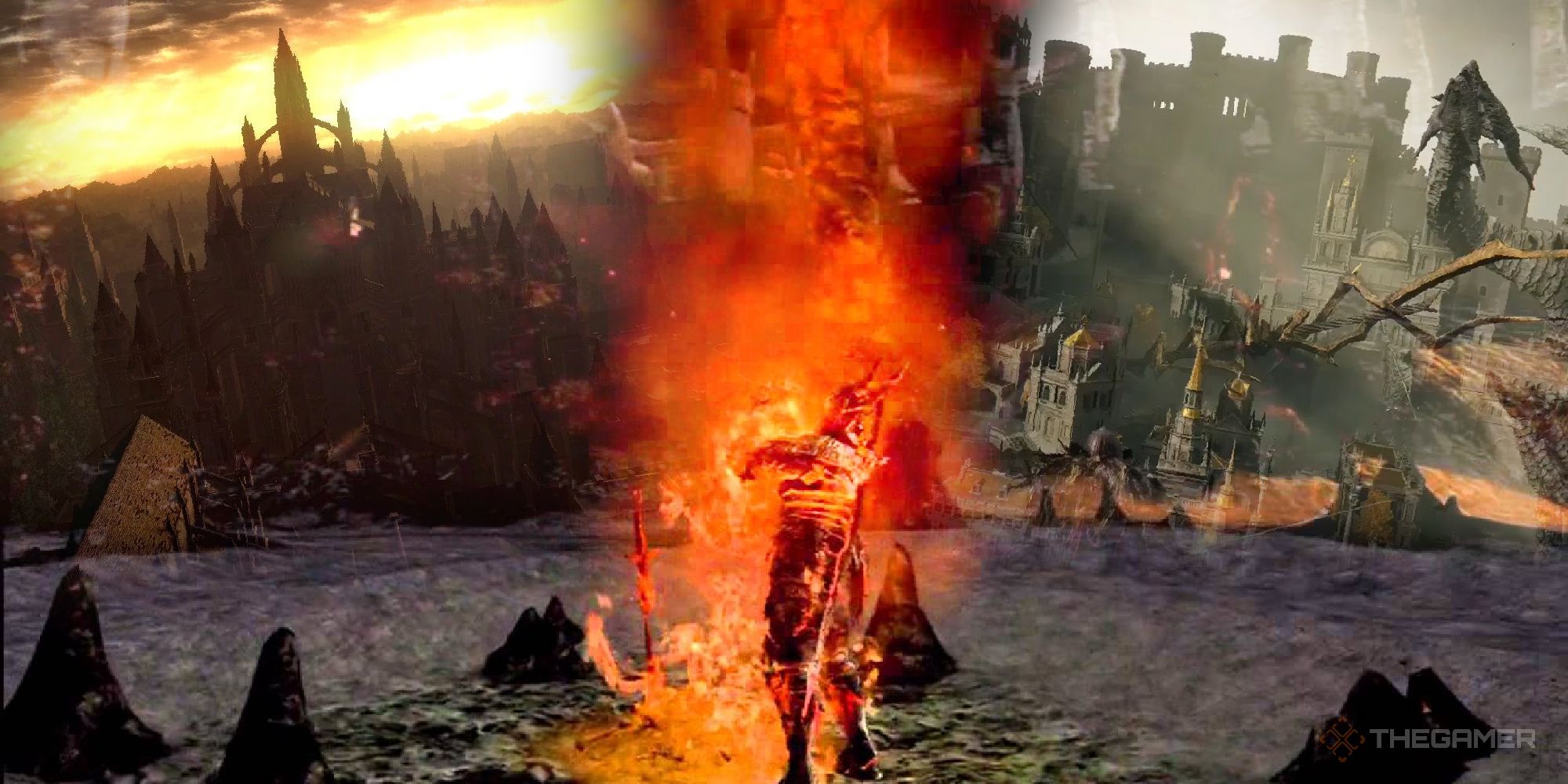 In a series filled with a dark and enigmatic take on lore, understanding what’s really going on in Dark Souls is as difficult a task as the series bosses. But despite their apparent refusal to tell the player anything, the Dark Souls series presents a story that might hit a little too close to home for anyone living under late capitalism.

Without a clear guide or objective, you are invited to journey through the realms of Lordran, Drangleic, and Lothric in which the Dark Souls trilogy takes place. Much of history has already happened – wars have been fought, kingdoms have fallen, and now you have arrived to stop the world from falling apart even further. As you wander through these fallen kingdoms and crumbling empires, the game invites you to ask yourself: is it all worth saving?

In the first Dark Souls, the iconic, pristine city of Anor Londo is a lie. The golden land of the gods has turned dark, and the sun itself is here to make you believe the world is worth saving. The Age of Fire is meant to end – but instead countless undead are tricked into throwing themselves into the fire to keep the embers and a crumbling order in power – a process called binding the fire.

Age persists, literally fueled by burning undead corpses, all the way to Dark Souls 3. The final game in the trilogy sees the world – and time itself – on the brink of implosion. The Age of Fire is proving to be an unsustainable and increasingly gruesome state of existence.

The Age of Fire, which you are tasked with saving, is the reason the world is collapsing. Blind to the consequences, the gods and world rulers hunt the undead like you, doing little more than delaying the inevitable increasingly disastrous outcome.

In the end, you’re supposed to question everything – if you really want to keep this world going, knowing that it will just fall into another cycle of crisis and misery.

To the desperate state of the world is added the desperate state of the undead. Countless undead are raised to connect the fire – and as such you are not really a true protagonist of the Dark Souls series. You can fight bosses, light bonfires, and choose the ending, but if you do as you’re told and connect the fire, you’re just another pawn serving the interests of the gods.

However, in every game, right from the start, you are told that you are special. You are the chosen undead, the bearer of the curse, the ash. But Dark Souls is playing games with you – selling you a false narrative to make you think you’re destined for success, destined for greatness.

You were never alone in this quest – the promise is a lie.

The world is full of people like you – and you see them walking the same paths as you, doomed to die again and again until you either give up or finally, against all odds, succeed. The undead fight alongside you as you advance, almost all of them eventually going hollow and losing themselves in madness – a reflection of your fate as the undead if you don’t fulfill your duty. A punishment for not accomplishing the will of the gods quickly enough.

For many of us in the real world, our lives consist of a repetitive daily routine of work, crushed in a seemingly pointless struggle, where to succeed is to defy incredible odds. Progress made in a day is figuratively reset when we rest, having to wake up and start all over again, perpetually. Dark Souls’ core gameplay loop fits this pattern almost perfectly – and in real life as in Dark Souls, this repetitive cycle crushes us. It’s too grueling, harsh, brutal and fruitless for most to continue, and those who succeed end up leaving the less fortunate behind.

Likewise, our world itself and the structures that created it seem to be collapsing. Those in power are increasingly detached from the realities of ordinary life and what the coming years might hold, refusing to act in the face of mounting existential threats. Our future looks set to involve global warming, financial crises and ecological catastrophe – our own slowly dying flame bringing darkness to the world. The inaction of those in power and the shifting of responsibility to those they expect to sacrifice to keep the embers burning is a very familiar parallel.

With its high-fantasy setting, god-guided quest to save the world, and themes of collapse, undeath, and corruption, Elden Ring is FromSoftware’s true spiritual successor to the Souls series – but its story and message are a bit different.

Unlike Souls, Elden Ring is much less dark. That said, the color and life of The Lands Between is still haunted by the grotesque and bizarre horror of the deity-adjacent Two Fingers that launch you on your quest to become Elden Lord and reforge the Elden Ring, saving the world in the process. of the collapse. Additionally, mysterious outer gods are hinted at to have true power over the world you inhabit, gently reminding you that the world is ruled by powers that you, as a player, never truly influence or understand. Besides the game’s notorious difficulty, all Dark Souls themes of alienation, helplessness, and success against extreme odds are still there.

The player is also granted more agency in the Elden Ring – given six possible endings and paths to becoming an Elden Lord. That amount of choice is slightly off, though – four of the six endings play out with largely identical cutscenes, with a powerful god still in control. The other two endings play out similarly with a force other than yourself in control – be it the Moon Witch Ranni and the mysterious Dark Moon, or the world-ending Flame of Frenzy. In short, much like being the chosen undead in Dark Souls, earning the title of Elden Lord is far less important in the world of the Elden Ring than it seems. It is a ceremonial position.

Elden Ring lets you succeed where Dark Souls never really did – but guides you to radically question what that success really means.

If Dark Souls is about capitalism, struggle, and the struggle to save a world only to realize that the world might not be worth saving in its current state, then Elden Ring goes one step further. What if, to truly change and save the world, we couldn’t simply act within existing power structures in society or act on an idea of ​​success that we were told was needed? What if, when all else has failed, we should try something new?

Next: A quest to find my name on EVE’s online monument

Elden Ring: How to Defeat the Grafted Scion