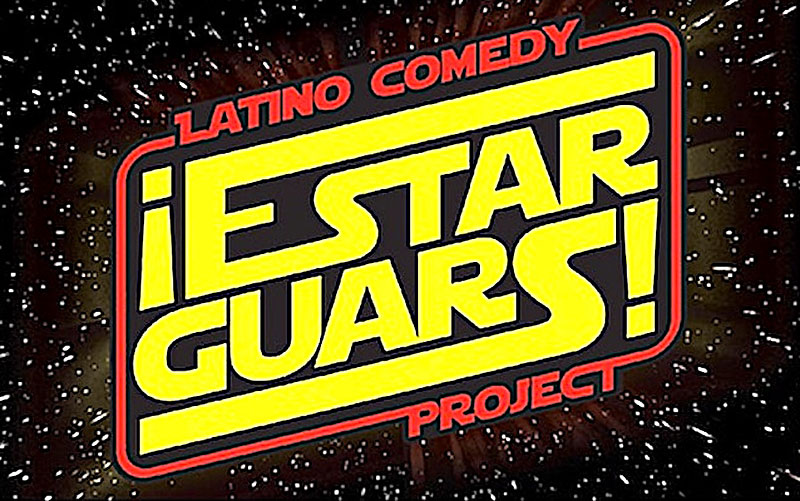 Five Ways to Celebrate Sci-Fi’s Biggest Holiday: Celebrate Different Ways to Look at the Cosmos for May Fourth

Because May the Fourth is approaching, after all, and there’s still more that resonates brightly and sketchily beyond what Light & Magic Lucas imagined a century ago. So here are five things we recommend for your extracurricular if not extraterrestrial joy this week. Today … present time! HAHAHAHA!

The Emmy-nominated Latin Comedy Project returns with this thoroughly mexified send-off of a pinch of Jedi shit that happened fairly recently in a barrio right across the tracks. Or rather, the LCP presents a “loving tribute of live comedy, original video and visual spectacle, recreating the neomythic rebellion of the film series as a modern Resistencia, with galactic walls, space chanclas, migrant farmers humidity, fearless princesas, mystical abuelas, and the targeting of Sanctuary Planetas by an evil empire bent on MAGGA (Make A Galaxy Great Again).” Note: Played mostly in English with some Spanglish, and it’ll make you laugh at your asteroids.
Until May 8. Wed-Sat, 8 p.m.; Sun, 5 p.m.
MACC, 600 River St.
512/974-3772
$25-28

Speaking of subverted sci-fi tropes, here’s a true classic of the genre. Surrender to absolute pleasure and witness Zach’s version of Richard O’Brien’s cult genderqueering masterpiece, edited into a stellar production enriched with party packs and audience participation, under the direction of Dave Steakley or one of its twelve clones.
Until May 1. Tuesday to Friday, 7:30 p.m.; Sat.-Sun., 2:30 p.m. & 7:30 p.m.
202 S.Lamar
512/476-0541
$25 and up
zachtheatre.org

OMG, kawaii! Ten rescued stuffed animals set out their science projects on a variety of topics, including a study into the comparative swimming abilities of different stuffed species, exploring a stuffed corndog from inside British telephone boxes versus to their exterior (and compared to police call boxes), a review of a potential third Fruit of the Loom varietal, and much more. Bonus: Vote for your favorite project, and apply to adopt a stuffed animal scientist.
Until May 22
2825 Hancock #111
Donations accepted
thesarf.org

This soon-to-be-unveiled part of UT’s ongoing Landmarks program is a pair of forms that cross the bridge from the Peyton Yates family to Cockrell School of Engineering to create unexpected social exchanges. Composed of four sheets of glass (two reflective diagonals and two clear verticals) by Sarah Oppenheimer C-010106 creates a sort of periscope effect that provides views above and below deck. Sounds pretty gorram sci-fi to us: like something you’d find on the Minbari homeworld.
Unveiling of the sculpture: Saturday, April 30, 10 a.m.
2501 Racetrack
Free
landmarksut.org

Everything everywhere all at once

Does it still have to be mentioned here so that you can see it? Do you need another flabbergasted, awe-inspiring citizen of Earth crying hallelujah for Dan Kwan and Daniel Scheinert’s brilliant exploration, directed by Michelle Yeoh, of the personal possibilities of a multiverse before picking up tickets for the cinematic ride of your (perhaps infinitely repeated) lifespan?
See our movie listings for showtimes.

Futuristic funds: how technology is changing your pension