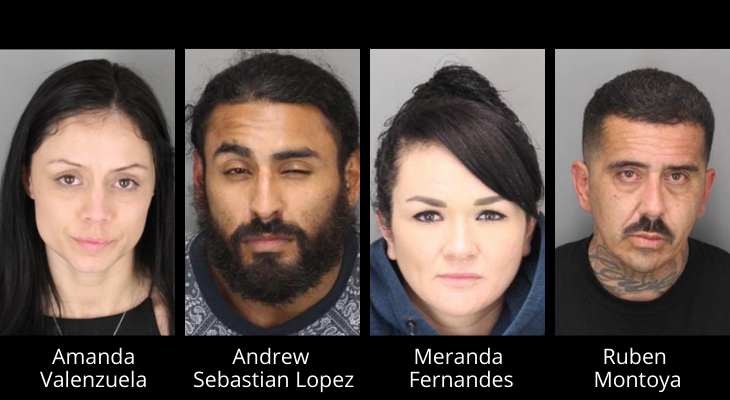 On February 22, 2021, SBPD detectives conducted a follow-up investigation into a series of crimes related to the theft that occurred from December 2020 to February 2021. During this time they contacted two subjects in a vehicle, Meranda Fernandes (30) and Rubén Montoya (43). Both subjects are residents of Santa Barbara.

Montoya was found in possession of a loaded firearm and additional firearm components, along with methamphetamine and personally identifying information with intent to commit fraud (identity theft). Detectives later discovered that Montoya was manufacturing partial firearms at his residence. Montoya is a convicted felon and it is illegal for him to possess a gun or ammunition. He was sentenced to prison on several counts. He was released due to COVID-19 restrictions on bail for these alleged crimes and less than a month later was arrested again for possession of a loaded handgun, possession of drugs, as well as for identity theft and other related crimes.

During the February 22 investigation, Fernandes was found in possession, with intent to sell, of methamphetamine and heroin. She was also in possession of the credentials of many citizens of Santa Barbara and the surrounding area, and was suspected of possessing them with intent to commit fraud (identity theft). She was sentenced to prison on various charges.

Later the same day, detectives arrested Amanda Valenzuela (32) of Santa Barbara on charges related to the same investigation. It was discovered that she was in possession of personally identifying information and possessed it with the intent to commit fraud (identity theft). Valenzuela was also wanted for several previous crimes, including the following:

Valenzuela has been booked on numerous charges. Due to COVID restrictions, she was released from prison. She was contacted and promptly re-arrested on March 5, 2021, for identity theft, robbery, looting and drug charges stemming from other crimes.

During these various investigations, another suspect, Andrew Sebastian Lopez (25) of Santa Barbara, was identified as a criminal accomplice of Amanda Valenzuela. Detectives determined that he had committed the following crimes:

Thank you to everyone in the community who participated in the investigations and the hard work of the officers and detectives of the Santa Barbara Police Department.