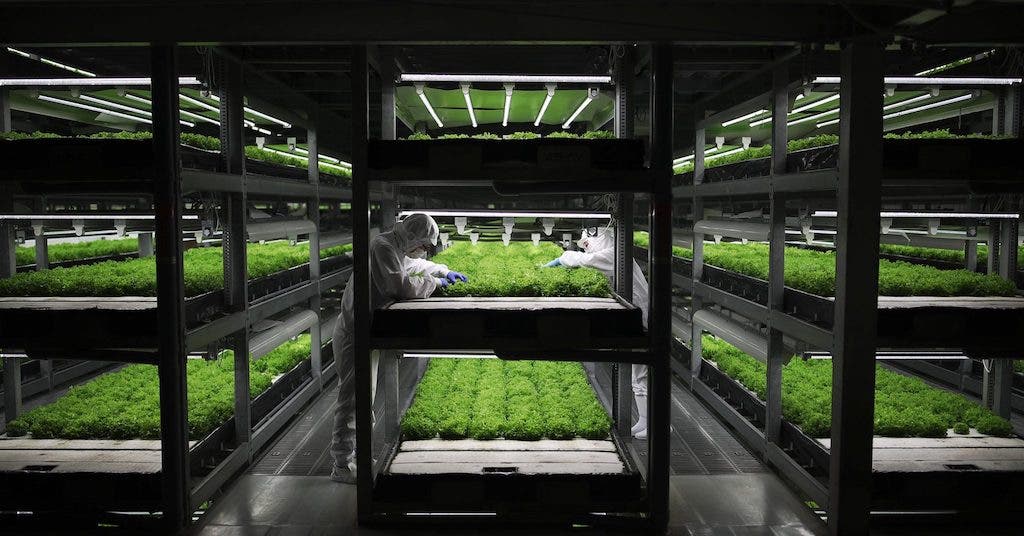 From Japan to Iceland, futuristic vertical farms are starting to bloom

In 2016, a new farm in Japan made headlines. This was no ordinary farm – instead of using soil, it used a hydroponic system, and instead of using sunlight, it used artificial LEDs. But the farm could grow 12,000 heads of lettuce a day, close to urban areas where the product is in high demand.

This is not an isolated example. Just a year later, another vertical lettuce farm has been established in Iceland, producing a variety of green vegetables that it sells to restaurants and retailers, without using any sunlight. But are these isolated examples or does vertical farming really make sense?

When you think of indoor farms, something like a greenhouse probably comes up. But a radical trend is revolutionizing indoor farming, moving it from horizontal to vertical – and it’s not just a concept anymore. All over the world we see examples of vertical farming projects, and while significant challenges remain, the lure of technology is hard to ignore.

Indoor farming is a rapidly growing new trend that has significant advantages over traditional farming methods, including increased efficiency and sustainability. Indoor farming can also help fight climate change by reducing the amount of greenhouse gases (carbon dioxide, methane) released into the atmosphere and reducing the need for pesticides.

There are several ways to do indoor farming, but the most common approach is to use hydroponic systems. These systems rely on water systems rather than soil to support plant growth, creating a controlled environment in which plants grow efficiently. A range of specially designed sensors ensure that waste is minimized and resources are recycled wherever possible. Hydroponics also allows farmers to grow crops without fighting pests or epidemics, and it requires minimal land area compared to traditional farming methods. Because you’re essentially building the farm vertically, you can use places like old factories or warehouses.

This is where one of the main advantages of this technology lies: because it allows year-round production (which reduces costs and helps ensure food safety) and can be carried out in smaller places. , it is perfectly suited to urban (or peri-urban) culture. This reduces costs and environmental issues associated with transportation.

Another problem that vertical farms tackle is waste. Conventional farms produce a lot of waste, which often ends up in rivers and other waterways. Indoor farms use water resources more efficiently because they don’t need to irrigate plants with water from outside. They also have the ability to recycle wastewater into fertilizer or animal feed, making it a fairly durable system that doesn’t require a lot of supervision (most of the work is automated).

Unsurprisingly, this technology has caught the attention of urbanized countries like Japan and Singapore, where land surface is a scarce commodity.

For centuries, Japanese agriculture has been essential to the country’s survival – and given its rugged landscape, often rocky soils and steep landscape, farming in Japan is not easy. But despite the adversity, Japanese farmers endured and managed to establish a reliable system. Until recently. Climate change has made agricultural work in Japan a risky business. From extreme weather events to droughts and floods, climate change has taken a toll on farmers in Japan, and climate change is only expected to decrease both the quantity and quality of crops in Japan (as in most places in the world). Also, labor resources are scarce in Japan and many buildings could be redesigned.

This is where vertical farming could come in.

In Shizuoka Prefecture, a facility of about 20,000 square feet (0.2 hectares) produces 12,000 lettuces per day (lettuce is a perfect fit for this type of farm). Farmers configure the plant lighting regime (using LEDs), as well as temperature and humidity level, and enjoy harvests all year round. Not only is the area required for yielding much less than with conventional methods, but the water consumption is also lower (10 to 20 times lower).

More recently, a farm in Kyoto developed by a company called Spread became a record-breaking facility that also introduced bees to pollinate its strawberries, achieving stable pollination under LED conditions and showing that there are many unexplored opportunities on farms. vertical.

Singapore is also betting on vertical farms with a farm established in 2022 producing 500 tons of greens every year, in addition to its previous projects. Being able to grow food directly in urban areas means you can get it to consumers quickly and inexpensively.

Meanwhile, Iceland is taking advantage of its ability to produce cheap, sustainable energy by using geothermal sources to power a large vertical farm. Iceland has constantly had the problem of having to import food, and Iceland has one of the most expensive food markets in the world because of this. But Andri Bjorn Gunnarsson, founder and CEO of VAXA, the company behind the vertical farm, says Iceland also has some advantages that make it suitable for vertical farming.

“We need smarter ways than we have now to produce food for many more people,” says Gunnarsson. “For taking the first steps into a young industry like vertical farming, the Icelandic market is ideal in many ways,” he says, pointing to the country’s clean water, educated workforce and relatively long distances. short, which facilitates logistics. In addition, 100% of Icelandic electricity is generated from renewable sources. As Gunnarsson says, “If you want to run a vertical farm like a sustainable business, you need to have renewable electricity.”

These are not isolated examples. It is estimated that there are over 2,000 vertical farms in the United States, and the market is expected to grow from $4.21 billion in 2021 to $5.04 billion in 2022. Although this is still very small per compared to global agriculture, it is strong growth that shows few signs of slowing down. down.

For decades the benefits of vertical trusses have been touted, but now it seems they are finally coming to the fore. The ability to grow plants anywhere, proximity to urban areas, and reduced labor and transportation seem to add up to a tipping point.

But despite all the benefits they bring, vertical farms have one big challenge: energy.

The good the bad and the ugly

So far, indoor farms have shown great potential for increasing food production while minimizing environmental impact. But this is especially the case for the use of resources such as land, water and fertilizers — energy is a different issue.

The innovation that makes vertical trusses even possible are LEDs. LEDs are more efficient than traditional light sources (such as incandescent and fluorescent bulbs), last longer than conventional lighting, and produce less heat and UV. But even LEDs consume some energy.

But other experts are not convinced. When you start factoring in other hidden energy costs (like transportation and fuel consumption of things like tractors used on farms), the difference starts to fade. If you factor in the negative externalities of agriculture as well (like fertilizer pollution and soil erosion), the balance really starts to even out.

Still, vertical farms are almost guaranteed to use more energy than traditional farming, but how much more is still unclear. Even so, you end up trading less land and water for more energy, and it could be a worthwhile trade-off, especially in areas where energy is plentiful (like the Iceland) and where land resources are scarce (such as Japan or Singapore). The nature of the energy produced is also important: if we talk about renewable energy, the carbon footprint will decrease considerably, but if you have to burn coal or gas to produce the energy of a vertical farm, it is much less likely. that the farm can truly be sustainable.

Ultimately, indoor farms aren’t going to replace traditional farming anytime soon. This is not an either-or-or proposition. The yield and reliability of a vertical farm makes it a desirable option in some cases, especially for large cities with few agricultural areas around them, but the reliability of artificial lighting is a fundamental (but surpassable) problem. ). With agriculture producing up to a third of all our greenhouse gas emissions and being one of the main causes of deforestation and environmental degradation, indoor vertical farming may be an appropriate solution, at least in some cases. Improvements in renewable energy and agricultural technology will only make it even more attractive.