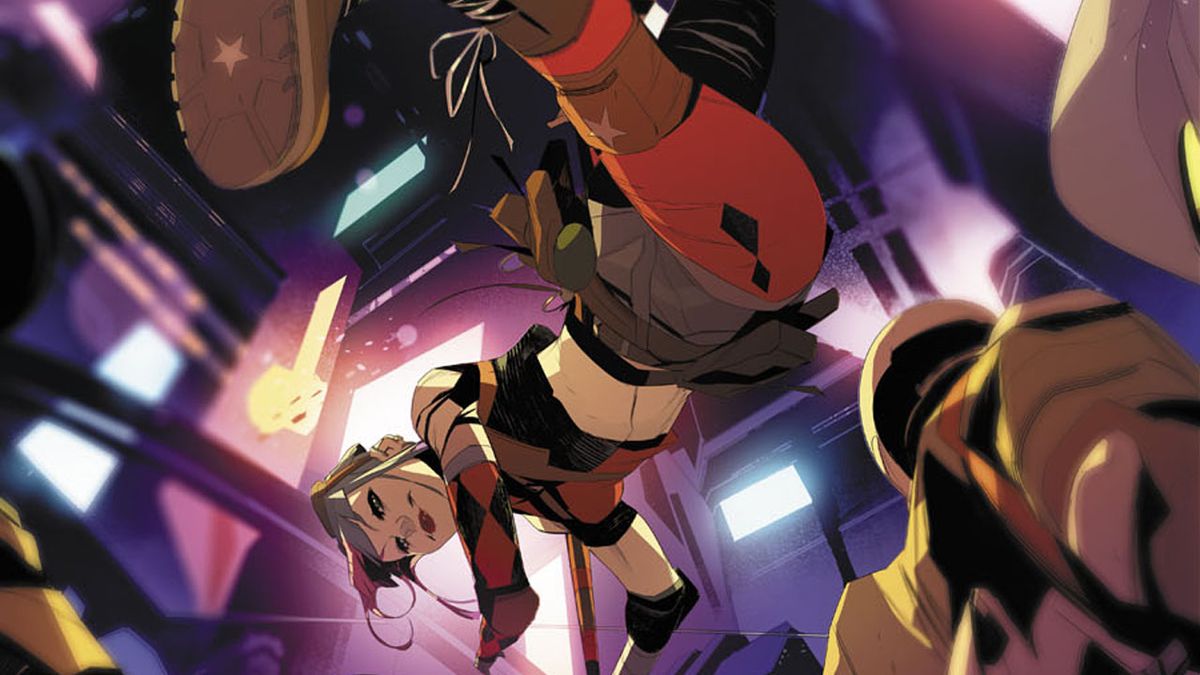 Harley Quinn is sometimes a hero, and sometimes a villain – and her knowledge of both sides will make her a valuable pawn – and prisoner – at DC’s early 2021 “Future State” event.

In the two-part series Future State: Harley Quinn by writer Stephanie Phillips and artist Simone Di Meo, she finds herself the prisoner of the Magistrate – an overbearing private military force that has taken over Gotham City. While many people might want Harleen Quinzel behind bars for crimes she’s committed in the past, she’s their prisoner because of what she knows about Batman and Batman’s rogues gallery – and that knowledge could help the magistrate strengthen his hold on Gotham.

Phillips spoke with Newsarama about what to expect with Future State: Harley Quinn ahead of its Jan. 5 debut, as well as Scarecrow and Black Mask’s involvement, why Harley isn’t in Gotham City Sirens, and if that title is a harbinger for what’s to come in Harley Quinn in the Continuing Modern Age after “The Future State” ends.

Newsarama: Stephanie, you’ve worked with DC on smaller projects before, but what was it like working on a big event like “Future State”?

Stephanie Phillips: It’s really exciting to be part of something so big that only involves the entire universe of characters. Going from shorter DC stories to a bigger take on Harley has also really given me the opportunity to do a lot more with the character and Gotham, which has been a lot of fun.

Nrama: What made you want to work on Harley Quinn in particular?

Phillips: I absolutely adore Harley. She has a very dynamic personality, but she’s also one of the smartest people in the room. I think that gets overlooked a lot on the character and I’m thrilled to have the opportunity to demonstrate just how smart and clever Harley can be, especially when faced with a problem that can’t be easily solved with mallet or hammer.

Nrama: We’ve seen Harley as both a hero and a villain – more recently leaning more towards heroism. Which side of the law can we expect Harley to be on in Future State?

Phillips: I think Harley is questioning both sides here. The magistrate represents the law, but there are clearly problems with the law that the magistrate chooses to enforce. With all the masked heroes and villains considered outlaws, there’s also not a really clear place Harley fits in, so she really carves out her own place while wondering what means to be good or bad under present conditions.

Nrama: Given that Harley doesn’t have its own ongoing series at the moment, which version of Harley do you think you’ve embraced the most?

Phillips: There is inspiration everywhere. I love the work of Jimmy Palmiotti, Amanda Conner and Sam Humphries, and these designers have definitely influenced my view of Harley. At the same time, I hope I can bring something a little new to the character because we see her at a really pivotal time in her life – she left the Joker and moved back to Gotham. She’s a lot more independent than I think we’ve ever seen her before.

Nrama: What do you think makes this version of Harley Quinn different from the ones we’ve seen in the past?

Phillips: Harley is now back in a town she helped the Joker destroy and, well, she doesn’t really have many friends here. While we’ll definitely see some of the classic personality and humor that makes Harley so fun, I think we’re entering a darker era in Harley’s history with some new issues that she’ll struggle to overcome. .

Nrama: And how did you know you wanted Black Mask and Scarecrow to be the big bad guys?

Phillips: Our two real “villains” – Black Mask and Scarecrow – represent the two sides that Harley is really stuck between in the story. Jonathan Crane ditched his mask to work with the Magistrate, and Black Mask is literally giving out masks in hopes of creating chaos and rebellion against the Magistrate.

I absolutely loved the idea of ​​Harley caught between these two characters and their unique motivations. Throughout the story, we see how all of these different motivations really clash and eventually come to a head.

Nrama: I know you’re not writing this book, but did your run affect Harley Quinn who wasn’t in Gotham City Sirens?

Phillips: I think we’re really seeing Harley come back into the Gotham fold more lately as she forges her own path, trying to navigate the hero/villain dynamic of a city that’s just been rocked by the events of ” The Joker War”. As Future State takes place a few years after that, I think it’s important to see Harley really chart a unique path that we haven’t seen for her yet, and I think we’ll continue to see more of that in 2021.

Nrama: Do you see any part of your Future State history dictating what comes next for Harley Quinn?

Phillips: Yes! I can’t say much more about it yet, but I’m really excited to know where Harley is headed next.

Nrama: Would you like to write more Harley Quinn in the future?

Phillips: Absolutely. Again, there are sure to be some fun new things to come after Future State and we can’t wait to talk more about what we have planned!

Nrama: Are there any other DC characters you’re dying to tackle?

Phillips: I’m really excited to be writing my dream characters right now (announcements to come!), but I’m also a huge Green Arrow fan and feel like I’d love to try Ollie one day!