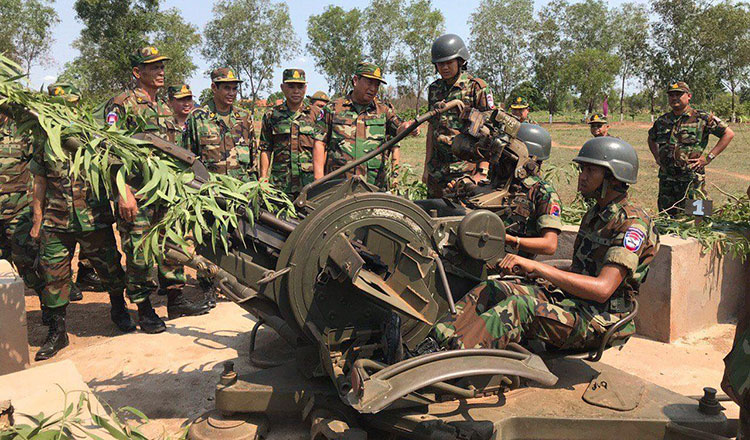 Cambodia will strengthen its specialized military body called Air Defense Force with 300 soldiers who will receive extensive training in the use of high-tech military weapons.

Mr Hun Sen said there had been comments that Cambodia lacked fighter jets and submarines “but we don’t need fighter jets because there is no necessary to shoot anyone. What we need is the air defense or the Cambodian Air Defense Force”.

Cambodia, he said, does not need jet fighters because there is no need for war, adding that huge sums of money would be needed for jets, the equipment, pilot training and maintenance.

“I have been at war for many years and I know how to wage war and how to use fighter jets for war. But we are not at war. There is no war here and we are not not at war with foreigners.

“What we need is a strong and effective air defense force. I just signed a sub-order allowing the Ministry of Defense to recruit more than 300 soldiers to serve in the Air Defense Force, because it is more important than buying fighter jets,” Hun added. Sen.

Major General Thong Solimo, spokesman for the Royal Cambodian Armed Forces (RCA) Command Headquarters, said the soldiers of the new Air Defense Force will receive technical training on the use of all kinds of weapons. of high technology at the Royal Military Academy of Cambodia.

He said it could take between 4 and 5 years for a soldier to master the use of a single high-tech weapon.

“After graduation, they will be assigned to the Air Defense Force.

“We currently have the Air Defense Force, but we want to recruit more soldiers because some veterans will retire soon. Basically, we want to create a very effective air defense team and strengthen our air defenses.

Choeung Charly, a professor at the Royal Military Academy of Cambodia, said the new recruits will be able to help veterans fill in the gaps.

He said new recruits must be properly trained to deal with the ever-changing world of weapons technology.

“Giving skills to soldiers is a key issue to pay attention to because they are a very important resource.

“At present, we have many training schools, such as Thmat Pong Active Officers School, Army and Navy Officers School, Royal Military Academy of Cambodia and many others. We need to increase the knowledge of trainers and cadets to improve the capabilities of our soldiers,” Charly added.

Defense Ministry spokesman General Chhum Suchheat could not be reached for comment.