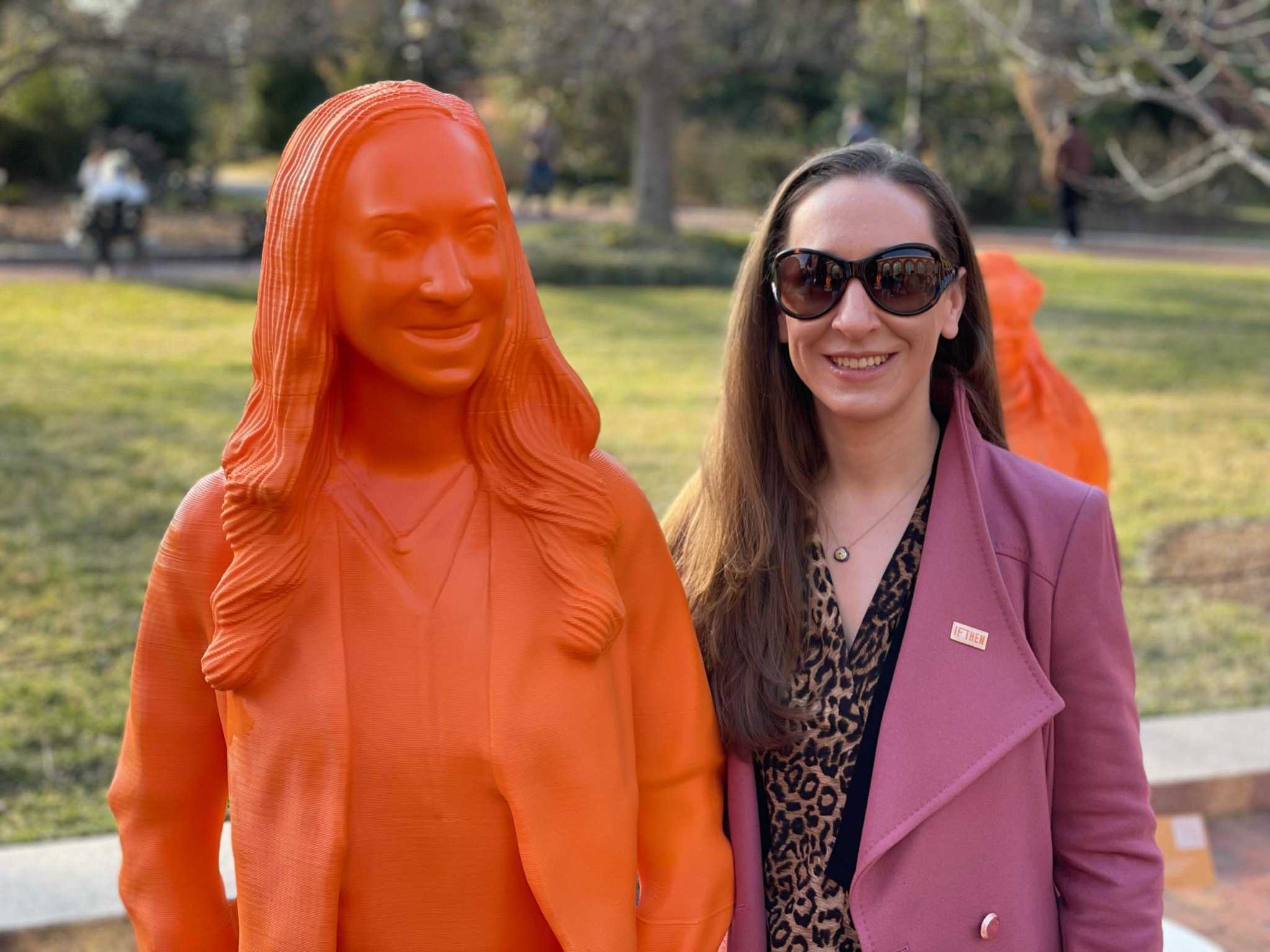 GREENWICH – Erika Kurt had a slightly unnerving – but exhilarating – experience earlier this month at the Smithsonian Institution in Washington, DC

She found herself face to face with a life-size statue of herself.

“Most of the time when you see a statue of someone they’re already dead,” she laughed.

But seeing the statue for herself, made of lightweight acrylic by a 3D printer, was also a great honor. Kurt, an Old Greenwich resident, educator and advocate for women in the lab, was one of 120 women honored at the Smithsonian for their work advancing human knowledge in science, technology, engineering and math.

Kurt said it was a pleasure to meet female neuroscientists, computer engineers, marine biologists and innovators who were also featured at the event.

“It’s an incredible and invigorating honour. And it was very empowering,” she said of the event, which commemorated Women’s History Month in March.

The concept of statues to honor women scientists served a purpose, Kurt said.

“If you look across the United States, there are thousands of statues of historical figures. And if you take in the biggest cities, there are less than a dozen who are women. The people you choose to honor in society and set up as role models really mean a lot,” she said. “The exhibition — it’s a model for young girls to show them what they can do next. …If she can see it, then she can be.

A New Haven woman active in public health, Crystal R Emerywas also honored at the Smithsonian by the IF/THEN Initiative, which aims to promote women in science. The IF/THEN initiative pursues its influence by other means. Kurt will speak at a panel at Comic-Con International in San Diego later this year, an event that attracts thousands of comic book and sci-fi fans.

The science educator is president of the Small World Initiative, a New York-based nonprofit education, advocacy, and health organization. Its mission is multiple: to encourage women to undertake and pursue work in scientific fields and to obtain concrete results in microbiology and medicine.

According to the IF/THEN organization in its evaluation of Kurt’s work, “She empowers STEM students to not only dream of using science to save lives, but also to dig in and help save the world, starting through the classroom.”

Kurt has been involved in science since her early days, growing up in Dallas, Texas as the daughter of a doctor.

“I started off as a science nut,” she recalls. “My dad would literally read me clinical studies like my bedtime stories.”

At Vassar College in New York, she enrolled as a physics major but lost interest because of the way science was presented, she said, a scenario that plays out for many young women.

At Yale University, science teachers were seeing women drop out of STEM fields at high rates. In 2012, a team of professors developed a new program, which involved students finding and cultivating soil microbes as part of their studies.

In medicine, it has long been observed that certain types of bacteria are very effective in killing other strains of bacteria. Thus, the soil bacteria that the students were collecting have the potential to create powerful new drugs against drug-resistant forms of tuberculosis and other infectious diseases, which have come to be labeled “super bugs.”

The initiative at Yale, beginning with just six students, was “discovery-based, hands-on” and offered a new kind of science education for young women, Kurt said.

This model expanded in 2015 into a nonprofit, Small World Initiative, of which Kurt is now the President and CEO. His organization trains teachers, as well as some high school teachers, in the laboratory and field skills they need to identify and cultivate soil microbes, as well as the curriculum to implement the program. The program now reaches nearly 400 schools in 15 countries, with 10,000 students taking the course. It is offered at Greenwich Academy and the main campus of the University of Connecticut at Storrs.

“It’s a real thing that students can do, just like they do in pharmaceutical companies, to find new drugs,” Kurt said. Some of the bacterial strains that have been identified show promise as drug treatments, she said.

In addition to helping bring women into the STEM field, Kurt is also a strong believer in championing the role of science in everyday life and in the public square.

“I think we really need a science literate society. We don’t just need more people on the ground, we need society as a whole to be more literate: it helps people make better decisions for themselves and their families and discern the type of information they get, and that’s really valuable,” she says. “I think science has to come to people, it shouldn’t be just for people in lab coats.”