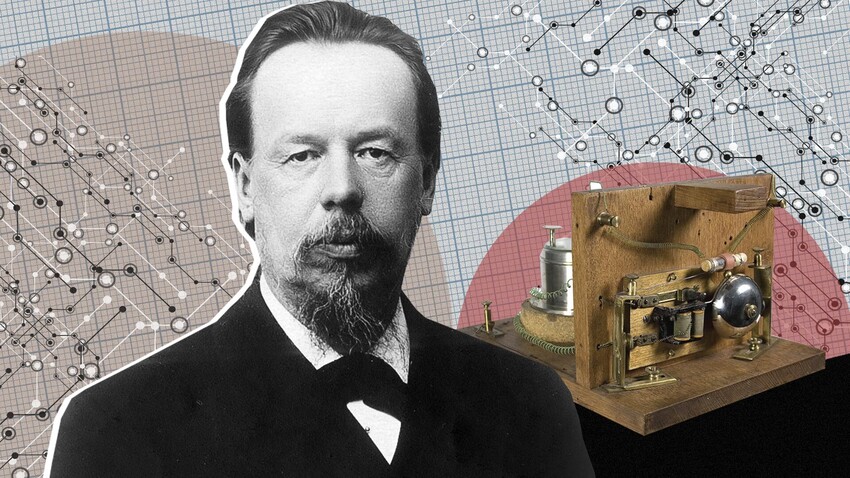 Alexander Popov is widely known in Russia as a pioneering radio inventor. Paradoxically, he built his first radio receiver, a storm detector, working almost in parallel with the Italian inventor Guglielmo Marconi, without knowing it. Great minds are alike!

Popov was the son of a priest and was born in 1859 in the settlement Turyinskiye Rudniki (now the city of Krasnoturinsk) in the Sverdlovsk region. Naturally, his father wanted Alexander to follow in his footsteps, so he sent him to the seminary school in Yekaterinburg, in the Urals, to study theology. An obedient son, Popov did what his father had done, but then took a surprising U-turn, to do it his own way.

From theology to science

After studying at Perm Theological Seminary for three years, Popov enrolled at St. Petersburg University to study…physics. Alexander was deeply in love with science and mathematics since childhood. He had an incredibly technical mind and graduated from college with honors.

The young physicist defended his thesis in 1882. He then concentrated on electrical engineering and became a professor at the Russian Navy’s torpedo school in Kronstadt (near Saint Petersburg). The students there were highly qualified and skilled, trained to take care of the electrical equipment of warships. A gifted teacher and brilliant researcher, Popov read a fair amount of books by his foreign scientific colleagues. He was particularly impressed by the discovery of electromagnetic waves by Heinrich Hertz and was looking for practical ways to receive them over long distances.

In the summer of 1893, as a representative of the Ministry of the Navy, Popov was part of the Russian delegation to the World’s Fair in Chicago. He had the chance to observe the experiments of Nikola Tesla, whose works he knew.

Popov had a breakthrough in 1895, when he built a device capable of recording atmospheric electrical disturbances. The then 36-year-old inventor installed his device at the St. Petersburg Meteorological Observatory. According to Popov, it could detect thunderstorms at a distance of up to 50 km and was intended to be used for receiving signals from an artificial source of oscillations. The details of the discovery were published in his lecture titled “On the Relation of Metallic Powders to Electric Oscillations”. The following year, Popov appeared before the St. Petersburg Physicochemical Society and transmitted the words “Heinrich Hertz” in Morse code. His short message was received from a transmitter located about 250 meters away. According to the St. Petersburg-based Popov Central Museum of Communications, Popov “succeeded in solving the problem of building a device capable of receiving and recording signals of different durations”. His work gave impetus to the emergence and development of many entirely new scientific fields, including radio broadcasting, radio astronomy and television, radio meteorology, radio navigation and radio intelligence. The system, developed by Popov, contained “all the basic communication elements inherent in the modern concept of ‘line of transmission of radio signals'”.

LEARN MORE: How is GPS different from its main rival GLONASS?

Some of the great minds were burning the midnight oil trying to find out if radio waves could be used to transmit signals. Guglielmo Marconi, an Italian engineer and inventor from Bologna, used radio waves to transmit signals over a distance of several kilometres. Marconi began work on radio transmitters and receivers in December 1894 and filed a patent application on June 2, 1896, two months and eight days after Popov’s first radio transmission. The Italian electrical engineer received a patent for “Improvements in the transmission of electrical impulses and signals”, in other words, the first patent for a communication system based on radio waves. In 1909, the Nobel Prize in Physics was awarded jointly to Guglielmo Marconi and the German engineer Karl Ferdinand Braun “in recognition of their contributions to the development of wireless telegraphy”. Marconi (1874-1937) has since been widely recognized as the inventor of the radio.

It is believed that the strict secrecy regime to which Alexander Popov was bound when he worked for the Russian Navy prevented the physicist from being recognized internationally as the first true inventor of the radio. The arguments that continue to this day indicate that the idea was in the air, and since great minds really do think alike, someone had to try.

The first radio station in Russia was set up under the leadership of Popov in Sevastopol on the Black Sea. Working hand in hand with the Russian Navy, during the maneuvers of September 7, 1899, communication was established with the legendary warships, including the Georgii Pobedonosets (St George the Victorious) and the destroyer ‘Captain Saken’, located at about 14 km from the coast.

In 1898, the industrial production of Popov radio stations on board ships began in Paris, manufactured by the firm Eugène Ducretet. During this time, the Popov Radio Workshop in Kronstadt, created on the initiative of the physicist, became the first radio engineering enterprise in Russia. In 1901 it began to produce radio equipment for the Navy. In 1904, “Siemens and Halske” (German electrical engineering company which later became part of Siemens), “Telefunken” (German radio and television apparatus company founded in Berlin in 1903) and the Russian physicist had jointly organized the ‘Department of wireless telegraphy according to the system of Alexander Popov’.

A still from the film about the Russian inventor of the radio, Alexander Popov.

In 1901, Popov became a professor of physics at the “Electrotechnical Institute of Emperor Alexander III”. He was praised “for continuous work on the use of wireless telegraphy on the ships of the fleet” and received the Grand Gold Medal of the World Industrial Exhibition in Paris, among other distinctions. After Popov’s death in 1906, a special award was created in his name in Russia, where his legacy still enjoys the highest respect.

If you use content from Russia Beyond, in part or in whole, always provide an active hyperlink to the original content.

What futuristic car feature did you think was real now?