These are roles for great singer-songwriters, who need space and the support of a discerning director and conductor. In Asmik Grigorian as an intelligent, serious and truthful daughter and Karita Mattila, once the main performer of the eponymous heroine, as a stepmother, the village sacristan or Kostelnička who makes an indefensible decision in order to give Jenůfa a better life such as she sees it, that equality of greatness shines for the first time, in my experience, since Roberta Alexander and Anja Silja sang the roles in Nikolaus Lehnhoff’s production of Glyndebourne over 30 years ago.

Lehnhoff opted for realism – a windmill in a woodland, claustrophobic interiors, rowdy villagers. Claus Guth’s semi-abstraction begins problematically: where are we? A soldier’s barracks seems to double as a maternity hospital, both large and impersonal, and the crowd scenes are stylized. Will this go in the direction of the too symbolic of Damiano Michieletto Káťa Kabanová at Glyndebourne? Hopefully not. The walls of the convention prison, the overhaul of the beds and iron mattresses in the great central act where the Kostelnička watches over Jenůfa, her illegitimate newborn and her future, with catastrophic consequences, make them stage images unforgettable, given the references and the quality of the artistic installations. sets by Michael Levine and lighting by James Farncombe. The guardians of the village are never far here, and although a giant crow’s head seems to have flown in the fantasy world of Guth’s Strauss Die Frau ohne Schatten at the Royal Opera – another success story in its uneven trajectory – it operates in the semi-delusional context (in photo below by Tristram Kenton: Saimir Pirgu and Karita Mattila in the second act). There is also much needed color at the Act Three wedding where Gesine VöLlm’s costumes take on their full meaning. The extremely final scene, where Laca, the once jealous outsider who slashed Jenůfa’s face with a knife, stands by her side and they walk past the slatted curtain to new life, is a stunner.

More importantly, Guth does not restrict the humanity of his main characters, for all elements of stylization; and the partnership of natural animals on the stage with the revealing handling of a difficult score by conductor Henrik Nánási – Janáček’s first opera masterpiece is not without texture issues – is often surprising. Nánási is not afraid of unsightly sounds like the sound of the tuba; the collective ropes bite and skate in their most difficult passages; and principal violinist Vasko Vassilev works perfectly with Grigorian as Jenůfa searches for her lost child and prays to the Virgin for her protection, never more beautiful nor more painful. Two well-contrasted tenors bring the necessary intensity to their roles: Saimir Pirgu’s Italian sound sounds like the alluring but insensitive adventurer and the offspring of Števa privilege, while Nicky Spence – who sang Števa to the English National Opera under the direction of another great conductor, Mark Wigglesworth, and currently rehearsing there Wagners Siegmund, which can put his bugle voice under unusual strain – bends the text like a native Czech and brings nuances of the late Philip Langridge to Laca’s role in the crucial resolution of the drama. 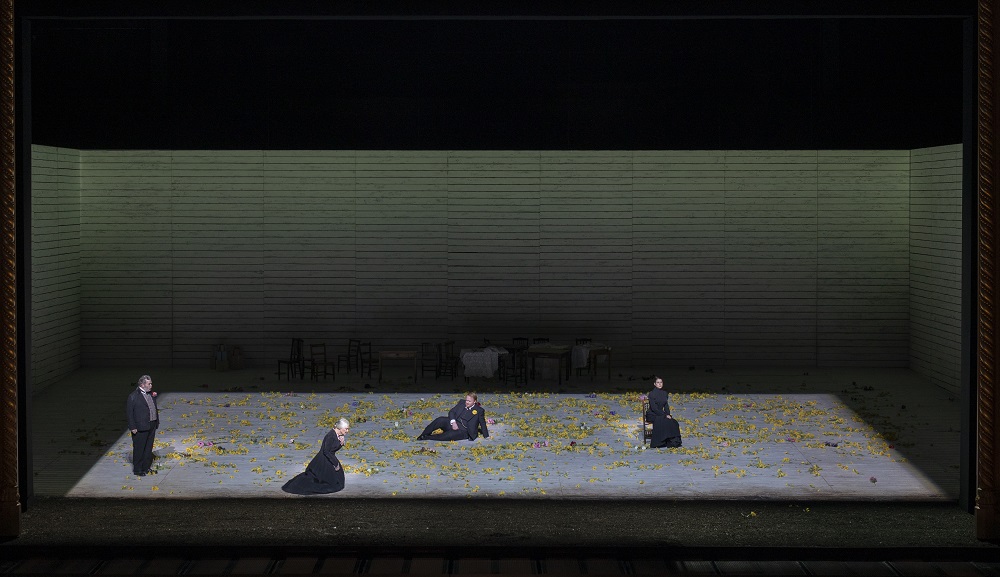 There is an exceptional cast among the small roles: Elena Zilio, a faithful Puccini at the Royal Opera Trittico, in the role of grandmother Buryjovka; David Stout as an energetic plant foreman; Former Jetter Parker Young Artists Angela Simkin as the prancing girl at the wedding and Jacquelyn Stucker as the daughter of Mayor Karolka, who seems to have won the once fickle heart of Števa.

But it is the luminous tones, the desperate cries and the captivating stage movements of Grigorian and Mattila in Act II that remain most engraved in the memory. It is not usual for the role of Kostelnička to be sung so beautifully, while Grigorian perfectly controls every phrase, even if his Jenůfa tears us apart. The role reversal towards the end is also unforgettable in another painting where Guth sets the stage for the main showdown (photo above by Ivor Kerslake: Jeremy White as mayor, Mattila, Nicky Spence as Laca and Grigorian). Hurting, finally exulting; I can’t wait to see the close-up faces of the show, which, luckily for the Royal Opera, can be seen for free by thousands on the wonderful OperaVision channel.

La Rioja mixes the old and the new

Inspired by their eerie and possibly haunted nature, the Stanly couple marry at…

Q&A: Michelle DeYoung on performing with the San Diego Symphony, Mahler, and the…