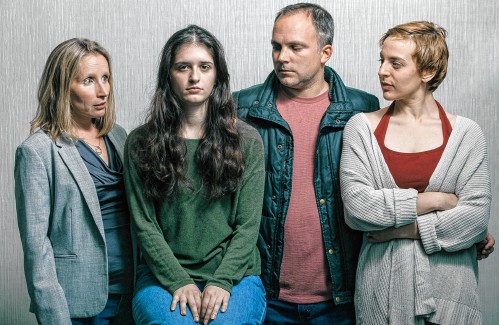 Fifteen years ago, Carey and Matt Cahoon sat in their living room with Saint Anselm alumni Brian and Rachel Kennedy trying to come up with a name for their new theater company, which produced August Strindberg’s Miss Julie.

At the time, they worked at the Palace Theater, which produced mostly Broadway-style musicals. What they wanted to do was intimate, contemporary theatre. Theater that was a bit more in your face. “It’s like, KAPOW!” Brian Kennedy said, and the rest agreed; that was exactly the feeling they wanted to create. The name stuck.

The Kennedys have since moved to the Midwest, but the Cahoons have continued to build the company, and this fall the KAPOW Theater is entering its 15th season as Concord’s Bank of New Hampshire Stage’s newly named resident theater company.

It’s a big step. Previously, most KAPOW Theater productions were at the Derry Opera House or the Stockbridge Theatre. While her home base remains in Manchester, where her rehearsal studio resides, the performance space at Concord fits in well with the couple’s recent move to New Hampton for Matt Cahoon’s new role as director of theater at the New Hampton School.

“Doing our shows at the Bank of New Hampshire Stage – this really high-tech and beautiful new space – is such a great opportunity. We’re thrilled to be here,” said Matt Cahoon. “Having the support of their marketing arm and staff is also very important to us.”

Capital Center for the Arts executive director Sal Prizio floated the idea of ​​the KAPOW Theater having a more permanent home in Concord after seeing his rendition of Clare Barron’s Dance Nation on the Bank of New Hampshire stage l last winter.

“I’m relatively new to the role of Executive Director, and when I came here, one of my tasks was to expand as many partnerships and relationships as possible within the community,” Prizio said. “I think the theater work that KAPOW does is very important. This raises questions for the community to think about. I went to one of their shows and thought this is great work done by local professional actors, and we need to get more involved in this.

KAPOW Theater is using its 15th anniversary as a time for reflection, with the theme “Recent, Distant, Remember” affecting all of its productions for the 2022-2023 season – including its premiere, Mr. Wolf by Rajiv Joseph, which is directed by Matt Cahoon and actors Carey Cahoon, Peter Josephson, Amanda Lattanzi, Nicholas Meunier and Courtney St. Gelais. It takes the Bank of New Hampshire stage from Friday, September 23 through Sunday, September 25 and the Charlestown, Massachusetts Work Theater on Friday, September 30 and Saturday, October 1.

“We hope that members of the public who have been really loyal to us in Derry will take the opportunity to come and see us in Concord,” said Matt Cahoon. “Between the two venues, we try to give people options of where they can see KAPOW Theater.”

One of the hallmarks of KAPOW Theater is that it produces works that ask questions, and Mr. Wolf is no exception, following a 15-year-old girl, Theresa, who is miraculously returned to her parents. after being abducted as a toddler. The production quickly bounces from location to location, so instead of big set changes, transitions of time and space will be transmitted through props, costumes, and the stage’s video wall.

Over the past two years, KAPOW Theater has done a lot of live theater, so performing at Concord also provides a great opportunity to use the lessons of the pandemic in live productions.

“That’s one of the things that really got us excited about the Bank of New Hampshire scene. There’s this massive 15-by-32-foot video wall that allows us to play with the projection in a big way,” said Matt Cahoon “There’s a learning curve in terms of high end, but it’s something we’ve been playing with a lot over the past few years.”

Also new this year is a director of intimacy, Kyrie Ellison-Keller, who works with actors to establish and maintain boundaries in rehearsal and performance spaces. Matt Cahoon says privacy leadership is a big area outside of New Hampshire, but he doesn’t think it’s still the case in the Granite State.

“There’s not a lot of what most people think of as ‘intimacy’ in Mr. Wolf, but there are huge moments of emotional intimacy that Kyrie really helped us through. been a big priority for us this year,” said Matt Cahoon.

Lattanzi, who plays Theresa, says she enjoys the challenges presented by Mr. Wolf, but sometimes his sensitive subjects can be exhausting. Having Ellison-Keller go over safety practices and boundaries put her at ease and acted as a way to break the ice between her and her castmates.

“It’s common in theater for shows to have sensitive topics, and art is a great way to address those topics,” Lattanzi said. “It’s hard for me personally to go home and not think about the show and its characters. I think that’s the nature of being an actor, but it’s definitely helpful in dealing with strong emotions. that accompany this character.