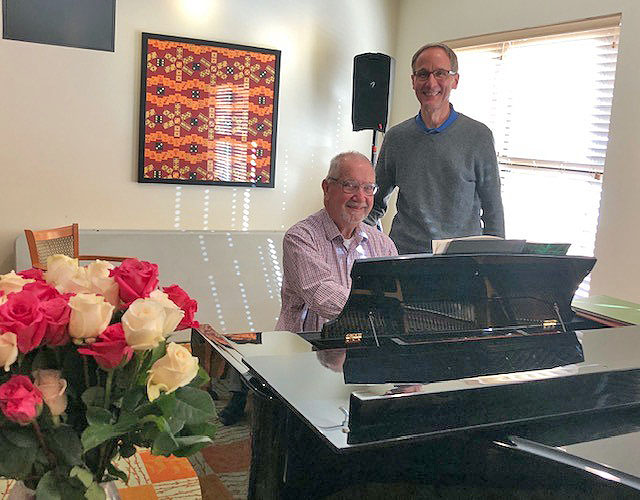 At Carillon, the Leisure Care hotel-style senior residence adjacent to the University of Colorado Boulder, every resident is seen, known and valued. And each resident enriches the community in a unique way, from the garden club members who beautify the grounds to the retired teacher who teaches art lessons to the walking partners, readers and players who keep the community going. active and curious.

One resident, however, is particularly recognized (and loved) as fellow Carillon residents can’t help but hear of his gifts to the community: Bob Spillman, professor emeritus and retired piano faculty president and director musical opera program at CU Rock. An active composer and songwriter, Spillman practices daily on the electric keyboard in his Carillon apartment and, to the delight of the entire Carillon community, offers regular recitals, spontaneous afternoon gigs, and piano nights. with Broadway tunes and holiday favourites.

Carillon Business Advisor Christian Shahmardian said, “Bob is an absolute asset and a gift to our community. The highlight of my day is when he plays – I open all the doors to my office to the piano, and if he misses a day or two, everyone asks where he is. It shows how much he means to all of us.

A “lucky” place
In fact, Shahmardian said, “Bob’s only flaw is his modesty.” Spillman recounts his incredible career – with degrees from one of America’s top music schools, a Fulbright scholarship, the publication of his music textbook, prestigious conducting, teaching and performing opportunities and recently , performances of his original compositions – until destiny . “I think I’ve had an absurd number of times in my life where I’ve been more lucky than smart,” he said with a chuckle. “I have a lot to be grateful for, including being in this good place. This place suits me very well.

A resident of Carillon for about four years, Spillman left “a big house all by himself in Lafayette,” he said. “I love being close to campus and walking distance to all kinds of places. After living alone for decades, I feel ridiculously lucky to have this beautiful place to live, where I don’t have to cook meals I don’t want and where I don’t even have to change the sheets in my my bed. Additionally, he continued, “There are really really nice people working here.” Spillman enjoys jumping into frequent Carillon exercise classes “when I want” and that he has time and peace to devote to music.

Most of the time, Spillman uses software to compose on his keyboard, working on the keys and refining the pieces before sending them to his publisher. He has recently set several groups of poems to music, including pieces by Emily Dickinson, Li Bai, James Wright and Jane Kenyon.

Spillman has been playing since he was three years old. He remembers: “My mother, a housewife, played the piano a little. We had an old upright piano and I sat next to her on the bench. One day she went away to answer the phone. When she returned, the young Spillman showed the exact measure where she had paused the song. “After that,” he said, “it was, ‘We’ll see if the music lessons take. “”

A lifetime musical contribution
The lessons have undoubtedly taken. Spillman graduated from the Eastman School of Music before studying in New York, where he accompanied, among others, Porgy and Bess at the New York City Opera Company. In 1964 he moved to Germany on the scholarship to further study piano, accompaniment, composition and lied, or the setting of poetry in a polyphonic form. “I was a starving musician in Europe, so I eventually came back to Eastman as a teacher to do two jobs for one pay, in the piano and opera departments,” he said. A few years later he started performing at the Aspen Music Festival and in 1987 he accepted a professorship to teach piano at CU – “just one job”, he said smiling, “But two years later, the conductor left and they asked, ‘Who do we know who can replace?’ Yes, I had two jobs again, and really, I love opera and being involved in it. He did both jobs until he retired in 2005, “even though I continued to hang around for 10 years. doing little things,” he said, including as a pianist-coach for composers working on new operas, conducting on campus, and accompanying at the Metropolitan Opera. National competitions. Spillman was awarded the Robert L Stearns from the University of Colorado Alumni Association in 2004 in recognition of his service and career.

“Teaching the piano has been really wonderful,” he said. “You feel like you’ve made some kind of contribution to someone. It’s a bit esoteric and weird to dedicate your life to playing an instrument, and I didn’t take advantage of it lightly.

Today, Spillman attends “every faculty recital I can” — made more feasible since the Carillon facilitates transportation to Tuesday faculty concerts, among other cultural and arts events at CU. He said, “It’s my home, and I love that I can still be involved in the music scene.” As a Colorado lover, Spillman volunteered for years with the Lafayette and Boulder open space programs.

Music for all ages
Reflecting on his current musical endeavours, he said, “Music is visceral, physically and emotionally stimulating, and why shouldn’t us old folks make the most of it?” Thus, in his Carillon concerts, Spillman noted: “I don’t explain everything, but I’m not going to play shitty music. I want them to listen and see what’s going on, whether it’s Schubert, Mozart or Chopin. I will try to make it beautiful.

Which he does, of course.

To learn more about the creative and engaging community The Carillon at Boulder Creek or to schedule a visit, email Shahmardian at [email protected] or call 720.565.6844.
www.leisurecare.com/our-communities/carillon-boulder-creek

3 directions for the Usos after WWE SmackDown