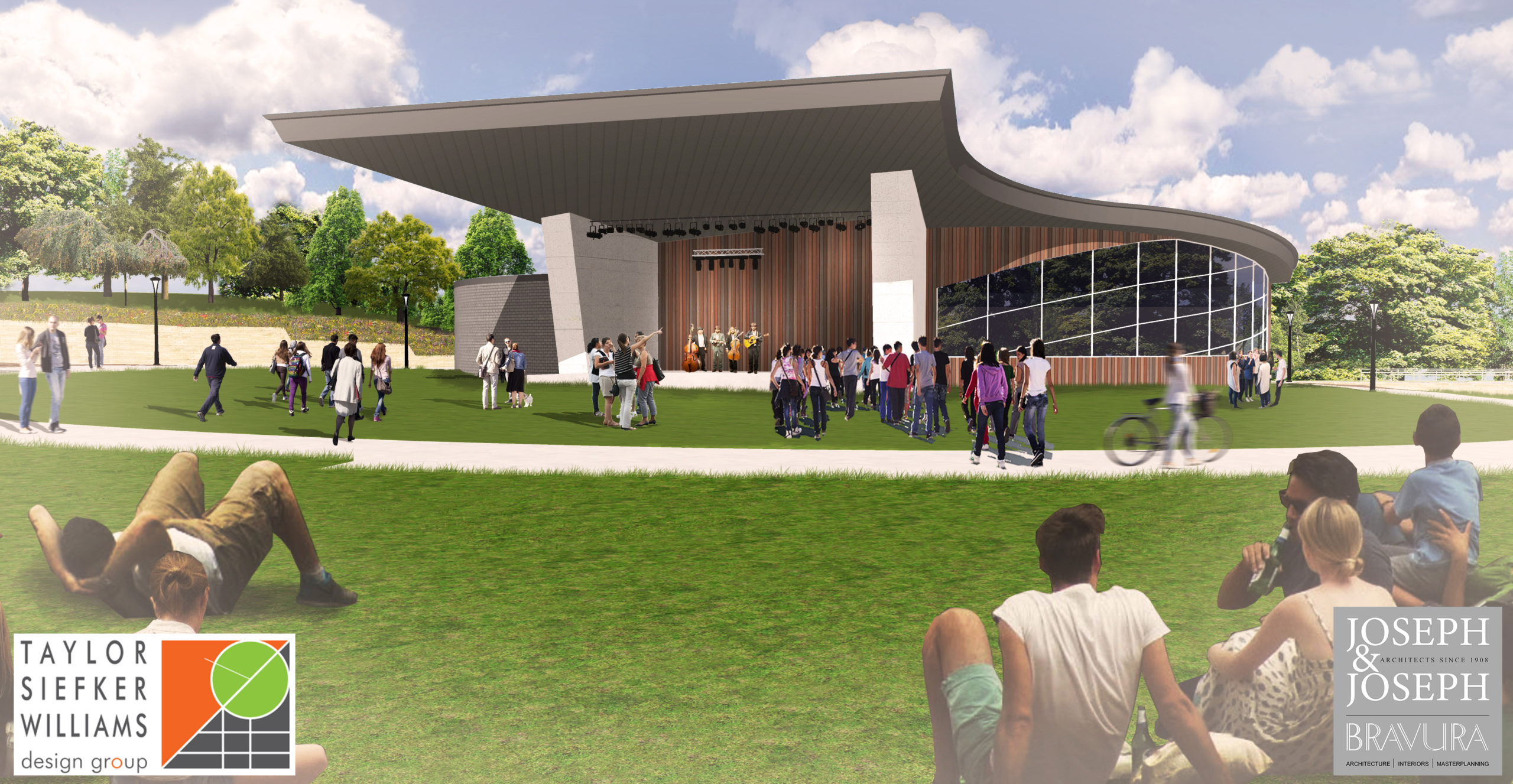 The City of Jeffersontown on Tuesday opened a new multi-purpose live events space that will host concerts, weddings and more, bringing a new performing arts venue to the East End.

Amphitheater features will include an outdoor stage, a “Great Lawn”, pathways for cyclists and pedestrians, a pavilion overlooking the Great Lawn, outdoor terraced seating, indoor event space with a picture window overlooking the park, trellis of oscillating benches and a building concessions.

According to press materials provided by the City of Jeffersontown, the amphitheater will accommodate up to 1,200 people inside the inner “circle” and 4,000 people inside the outer “circle.” The stage will be 1,616 square feet. (For comparison, the current Louisville Orchestra stage at Whitney Hall is about twice as large, according to its technical package.)

The event venue will be 2,900 square feet in size and will accommodate approximately 200 people seated on tables and chairs or 300 people for “classrooms/seminars”.

J-Town Mayor Bill Dieruf told LEO it is slated to open in 14 months, pending any supply chain delays or the pandemic.

During the press conference preceding the inauguration of the works, André Kimo Stone Guess, President and CEO of Fund for the Arts, said, “Amphitheaters are so important because they speak to the whole neighborhood; they address the whole community; they have open spaces for people to come [to.] And you should really be proud that it’s happening in today’s environment, because that’s what we need.

Mayor Dieruf spoke about the park’s appeal to families and individuals who may be moving to J-Town. Although the area where the park will expand was once the site of a sewage treatment facility, its transformation into a multi-use park is a testament to J-Town’s ability to adapt in a way that attracts younger families, Dieruf said.

“My generation was interested in golf courses. The next generation is looking at places where they can enjoy family, they can enjoy the arts. And what better way to do that is to take a plant and turn it from what it was into something you see on the [rendering poster] today,” he told the crowd.

Pointing to renderings of the completed park, Dieruf said, “When you look at those pictures up there, it just makes you smile. It makes you say, ‘Yes, I can have fun there.’ Yes, it’s family. Yes, it’s the community.

Dieruf said the impetus for its construction came, in part, from J-Town’s abundance of sports programs, which left a void for children who were more interested in the arts.

He added that members of the Louisville Orchestra, including music director Teddy Abrams, consulted on many aspects of the stage design, including the angle of the stage — not so much to keep the sun out of their eyes, but because the direct heat of the sun can change the sound of their instruments.

Although the orchestra currently performs at Veterans Memorial Park several times a year, Dieruf plans to invite them to the amphitheater as well when it opens. Their shows outside the city center, Dieruf said, help make the arts more accessible to the whole community and encourage greater participation in the arts as a whole.

Other possibilities for groups and events that could use the space, according to a press release, include Kentucky Shakespeare, Kentucky Opera, Louisville Ballet, musical theater groups, choirs, church services, touring bands, local music festivals and school graduations.

Dieruf said one of the benefits of building the site was that the city of Jeffersontown had already raised funds for it, so there would be no need to raise taxes.

Keep Louisville interesting and support LEO Weekly by signing up for our newsletter here. In return, you’ll receive news with a benefit and the latest places to eat, drink and hang out in Derby City.