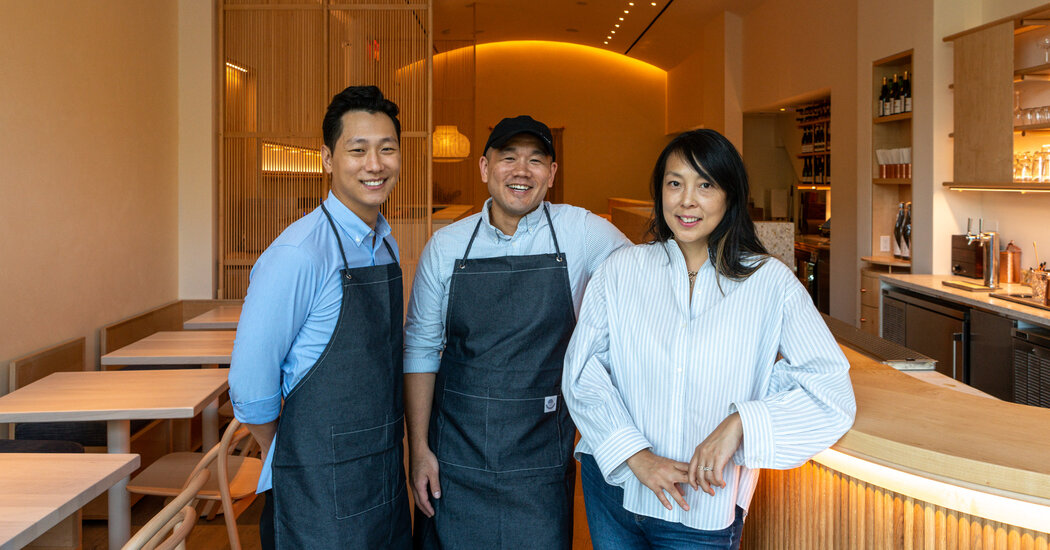 Two years ago, chefs Taka Sakaeda and Jihan Lee, along with their partner, COO Lisa Limb, established a branch of this restaurant in the West Village, a pale and stylish space specializing in temaki, small open breads. He now has a brother in Williamsburg, Brooklyn. The airy new restaurant, which offers sheltered outdoor seating adjacent to McCarren Park, takes inspiration from the original, with similar decor and two temaki counters for both chefs. But there are a few notable differences and new specialties for this place: the spiced cauliflower temaki and one called Phancy Philly, combining cream cheese, smoked salmon, caviar and chives (all that’s missing is ‘a pinch of anything spicy), are just a few. . Clam sashimi with cilantro gremolata, crispy rice chips to dip in a mixture of salmon and nori chips to attack a mushroom dip are also joining the line of items like yuzu soy squid, la Asari clam chowder with miso and butter and spicy crab temaki. Some beers and sakes come from producers in Brooklyn. (Opens Thursday)

The Lincoln Center district is once again buzzing. As the Metropolitan Opera, New York City Ballet and other arts institutions wake up from Covid hibernation, there are more restaurants in operation. Monte Carlo Hospitality Group, new owners of this seafood restaurant, have revised its configuration. They have reduced its size; it no longer crosses the block and can only be entered from West 65th Street. The dining room has been redecorated in vibrant shades of red, blue and green, with drapes and chandeliers. Chef and partner Antonio Salvatore offers a catch of the day, a special fish that can be ordered in raw preparations like crudo or sashimi, and cooked in different ways.

With the original in Astoria, Queens, and an outpost on Manhattan’s Upper East Side, this Greek establishment has now added a third location, in the space that housed Danny Meyer’s North End Grill in Battery Park City. Here the owners, Nick Tsoulos and Nick Pashalis, added Peter Poulakakos and his business partner, Paul Lamas, both of whom already own numerous restaurants in the city center. The two new partners are of Greek origin and this is their first Greek restaurant. The full menu compiles the greatest hits of Greek cuisine, with fish by the pound, raw sea bass specialties, a tower of eggplant crisps and crackling zucchini, shrimp saganaki, typical spreads, fish in parchment and lamb chops. Natural wood finishes, hanging plants, and photos of female Greek celebrities (including Jackie Onassis) define the interior; there are 80 seats outside.

Restaurateur and impresario Serge Becker (of La Esquina and Miss Lily’s, among others) said he and Philadelphia-based restaurateur Stephen Starr have been talking about a joint venture for some time. It is finally happening, after more than a year of delay, in Philadelphia under the aegis of the Starr restaurant. They envisioned a multi-faceted establishment combining restaurant, bar, bookstore, art gallery and music room which is a nod to the start of Mr. Starr’s career as a concert promoter. They want it to be a showcase for artists. The name, Mr Becker said, “does not mean anything,” but added that it was a section of the alphabet that was easily tripped over and that Mr Starr had often considered it for a restaurant. Baja California is the inspiration for Chef Francisco Ramirez’s cuisine, part of which is grilled on a real-fire grill. Tacos and several large-format dishes like whole fish and lamb shanks are menu highlights. There are several dining areas, including an outdoor area surrounded by greenery. (Wednesday)