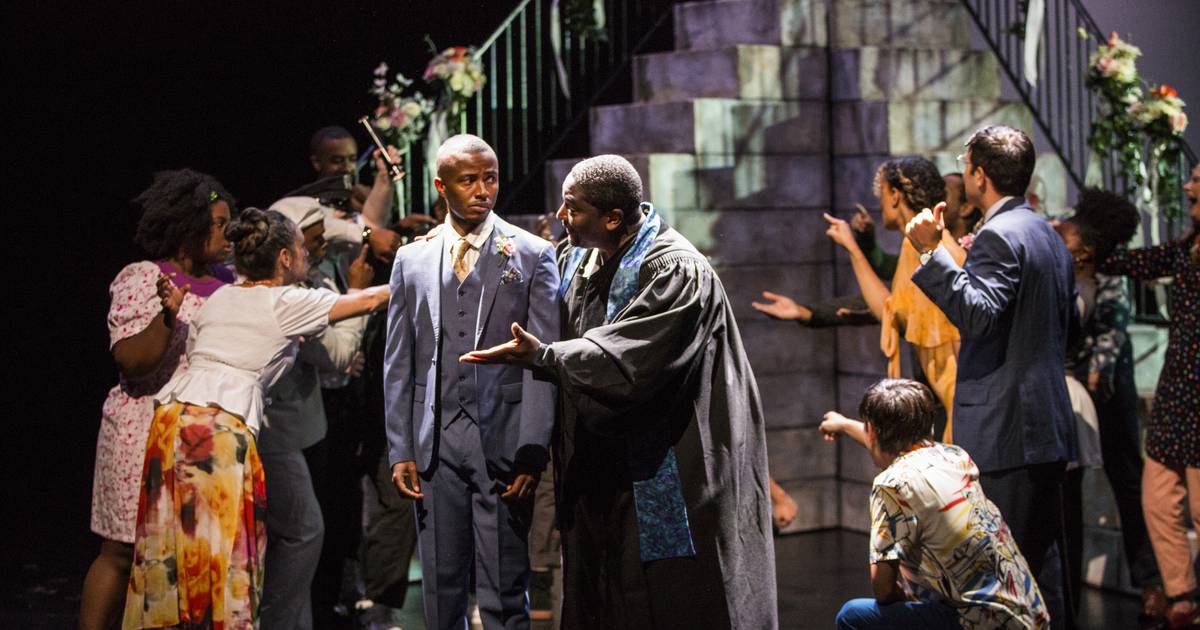 As it turns 60, Baltimore Center Stage reminds the people of Charm City that it belongs to them. It’s part of the community.

“These organizations and institutions belong to the people of Baltimore and that includes BCS [Baltimore Center Stage] and I hope everyone will come visit us at least once this season,” said Stephanie Ybarra, Artistic Director and Acting General Manager of the theatre.

Ybarra encourages the Center Stage team to have a “60/60 view,” reflecting on six decades of success and imagining 60 years in the future.

It’s an idea that pays homage to the past, present and future.

So it makes sense that the theater is entering its 60th season with Thornton Wilder’s 1948 play “Our Town,” a production that spotlights Baltimore and its gems.

“What we conceived of from jump is that if we’re going to do a production of ‘Our Town’ in Baltimore, then we’re going to host that show with artists from Baltimore and around,” Ybarra said. “That’s the biggest distinguishing feature is that these are people who actually live in our community.”

The people on stage and behind the scenes are as diverse as Baltimore itself. They include actors and creators of color and members of the city’s vibrant LBGTQ community.

The 20-plus cast also includes four generations of Baltimore School for the Arts alumni, as well as faculty and graduates from institutions across the region.

The play, directed by Stevie Walker Webb, reveals its Baltimore character not only through the cast but also through the set design.

“This production uses the Grover’s Corners setting, not literally, but as a metaphor. So what you won’t see on stage is New Hampshire. What you will see on stage are the Baltimore Steps. Baltimore streetlights,” Ybarra said. “We haven’t changed a word of the script, but the show’s physical vocabulary and the show’s sound vocabulary are decidedly now. It is current.

For the duration of the show, the Deering Lobby will house a community mural, where audiences and guests can add their own artistic touch, and a kiosk, where visitors can purchase locally made products.

Fashion designer Ayanna Greene, painter Will Watson and metal miniaturist Jill Orlov will have the chance to showcase their work at Bromo Seltzer Arts Tower from October 6 to November 23. The artists’ exhibits are part of the third and final edition of the Bureau of Baltimore Promotion and the Arts’ (BOPA) Emerge Baltimore Series for 2022.

Curated by Kirk Shannon-Butts, the trio’s solo shows will take place throughout the tower.

“It’s important to curate this kind of space and provide a platform for the best and brightest emerging talent in all disciplines to tell their version of American history in a thoughtful and artistic way,” said Shannon- Butts. “I see the Bromo Seltzer Arts Tower as the new home for Baltimore’s most promising creative voices.”

Greene’s “I Am the Phoenix” exhibit in the tower lobby features fashion designs inspired by a red carpet and downtown chic aesthetic – outfitted with feathers and pearls.

“While We’re Young,” Watson’s exhibition in the Mezzanine Gallery, features paintings with personal reflections and asks the question, “Where do the memories go?”

Although it’s the last show of the season, the Emerge Baltimore series will return next year, Shannon-Butts said, “with a new coterie of performers.”

Plan your weekend with our picks for the best events, restaurant and movie reviews, TV shows and more. Delivered every Thursday.

In his new production Baltimore Rock Opera Society examines “what would it be like if Baltimore had therapy?”

Described as a creative work of non-fiction, “Baltimore: In Recovery” will explore various facets of the city through four characters – The Young City, The Fated Teacher, The Leader Who Fell and The Jack of All Trades – in their first court-appointed therapy sessions.

local band The experience out of the water will perform an original piece in response to the topics of each therapy session.

The audience then becomes part of the action by diagnosing each of the characters and offering suggestions for improvement or determining if the patient is beyond rehabilitation.

The Baltimore Rock Opera Society is also using the production to collaborate with the New Song Community Learning Center, where it will perform “Baltimore: In Recovery” for New Song Academy students in grades six through eight, their families, and school staff. school before the show opens to the public. . The company’s teaching artists will engage in discussions with the students to examine some of the themes explored in the production.

“As adults, the things that happen every day in this city have negative consequences, so I think it’s important that we address these things with our young citizens and discuss how they affect us, because they notice it too,” said Petula Caesar, Director of Community Engagement at the Baltimore Rock Opera Society. “We hope they – and anyone who sees this show – will see something of themselves in these characters and learn the value of seeking help for mental health.”

The show runs from September 30 to October 1 at 8 p.m. at the New Song Community Learning Center. Tickets are $20 at www.baltimorerockopera.org.