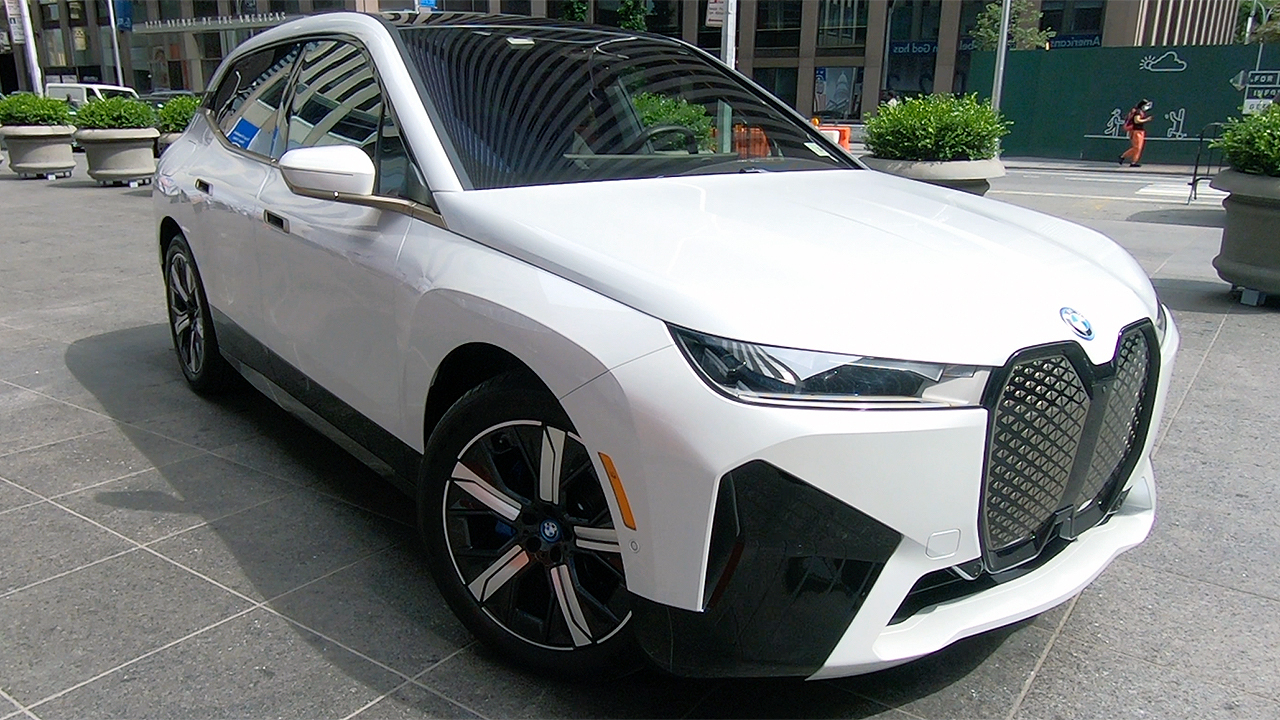 The 2023 BMW iX xDrive50 is the brand’s first purpose-built electric vehicle since the 2014 i3 and the first battery-powered SUV. Comments by Gary Gastelu, Fox News Autos Editor.

Almost a decade after BMW launched its first purpose-built electric car, the i3 subcompact hatchback, it’s back with the 2022 iX midsize SUV.

The i3 was one of the first all-electric cars to hit the road in the early years of the modern EV era, but never caught on. With a range of less than 130 miles per charge, US sales peaked at 11,024 in 2015 and that includes versions with an optional range-extending gasoline engine. Only 1,476 were sold last year.

The iX xDrive50 is aimed at a more popular luxury segment and about the same size as a BMW X5, but entirely different from it.

It’s built on a new battery-powered platform that will spawn a range of future models, but launches on the iX with a standard 516bhp all-wheel-drive system that makes it one of BMW’s most powerful models. . A more capable iX M60 is also available with a 610 hp powertrain.

The iX xDrvie50 starts at $84,195 and qualifies for the $7,500 federal tax credit which brings it down to $76,695. It’s close to the similar Audi e-tron S and significantly cheaper than the slightly larger Tesla Model X, which was recently priced to $120,990 and doesn’t get the credit.

The iX has a lower stance than the X5 to improve its aerodynamics in a bid to extend its range, which is officially rated at a maximum of 324 miles. Wheel and tire choices can negatively impact this, with a set of 22-inch performance tires bringing it back to 315 miles and a 21-inch option with softer all-season rubber at 305 miles.

The iX grille is coated with a polyurethane that can repair scratches with applied heat.
(BMW)

It’s not really a grille, as electric cars don’t usually have large radiators up front. Instead, it was reused as a housing for some of the sensors used by the vehicle’s electronic driving aids.

Its laser-applied 3D design is protected by a self-healing polyurethane coating that can repair minor scratches and dents on its own. Applying heat, or even leaving it in the sun for a while, can make them almost, but not always entirely, disappear.

The interior of the iX was named one of the best by WardsAuto.
(BMW)

The interior was named one of the best by WardsAuto. It features a relatively minimalist style with a simple dash and a widescreen display that incorporates both the gauge cluster and the touchscreen infotainment system interface. A button on the center stack and voice recognition provide optional ways to control it, and you can change the volume and accomplish a few other tasks by waving your hand in the air. Unfortunately, many systems rely heavily on it, which can make it difficult to adjust everything from temperature to adaptive cruise control tracking distance. The almost polygonal steering wheel does not take long to get used to.

Legroom is ample for both front and rear passengers and a full panoramic sunroof brightens things up. Unless you don’t want to. The glass has an electrochromatic coating that lets you fog it digitally, essentially turning the sunroof into an overcast roof.

A Dynamic Drive Package brings computer-controlled air suspension to the mix along with a four-wheel steering system that spins the rear wheels opposite the front at low speeds to make the iX more maneuverable in tight spaces and while driving. parking.

Additional packages add a self-parking feature and a 360-degree camera with a virtual 3D view accessible via a smartphone app if you want to check out the vehicle. There is also a camera in the cabin which can record footage as evidence if the alarm is triggered and alert you to the incursion via the app.

The security system can use the 3D parking camera and interior camera to take photos if the alarm is triggered.
(Fox News Autos)

You’ll have to watch yourself if you don’t want to break any laws driving it, because it’s a fast SUV. It’ll accelerate to 60mph in 4.4 seconds and slam your head into the seat the way it does, especially when you’ve got it set in Sport mode. Shorter people might not appreciate this because the high-back front seats have plastic holes where their head sits.

The high-back seats of the iX are equipped with a massage function.
(BMW)

As with many electric cars, and some internal combustion ones, the iX pumps synthetic engine noise it calls Iconic Sounds into the cabin to compensate for the silence of the electric motors. The tones differ by drive mode and are some of the best I’ve come across, but can be turned off if you’re not into that sort of thing.

The iX has such a firm yet smooth ride that the air suspension works even on rough city streets. On a freshly paved surface, it’s happiness and handles as well as an SUV weighing almost three tons.

It’s only under hard braking that you get a sense of its weight, but the low center of gravity gives it the kind of planted feel in the curves you’d expect from a BMW. Power delivery is seamless and without any of the disconnected quirks that some EVs exhibit.

My real-world testing in a 21-inch-wheel model fell a little short of the 305-mile projection, but its efficiency was in the ballpark through a mix of city and highway driving. One way to stretch it out in cold weather is to order the Radiant Heat Package, which adds electrically heated panels to the dash and armrests that you can use with the heated seats and steering wheel to draw less power from the battery. than cabin heating.

The iX can be fitted with BMW’s Active Driving Assistant Pro, which provides lane-centric adaptive cruise control at high speeds and in traffic jams. It can also check traffic and execute a lane change when you press the turn signal stalk, but requires you to keep one hand touching the steering wheel to operate.

Overall, the iX feels like the product of a company that’s been making electric vehicles for a long time, even though it only had one. It now sells an electric version of the 4 Series Gran Coupe, but it’s not an EV-tuned like the iX.

A final innovation can be found at the front, where the round BMW logo opens to allow you to fill up with washer fluid since the bonnet does not open.

Gary Gastelu is the Automotive Editor for FoxNews.com covering the automotive industry and racing @foxnewsautos