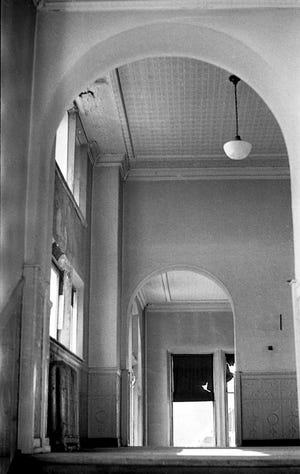 The resignation of City Manager William Arnold in December 1979 caused chaos. Arnold, who gave seven months’ notice in accordance with his contract, promised to find funds to complete the Opera House project before leaving office. When he volunteered his time to write grants, he was met with opposition from city council member Louis Leblanc: “I don’t understand why he’s still here. I disapprove of Arnold working on a city project,” LeBlanc told the Cheboygan Observer.

LeBlanc had concerns about the legitimacy of the City Hall-Opera House project. When the city council voted to approve a bond to bring money to the Opera, LeBlanc opposed it. “The main opposition to the bond issuance plans came from Councilor Louis LeBlanc. LeBlanc said, “We now have $2 million in the City Hall building and I would like to see a federal investigation into it.”

The council continued its search for a federal investigation, approaching the Economic Development Agency which awarded the city $1,681,000 to restore the City Hall and Opera House building. . Acting City Manager Rush Cattell “told council that he contacted the EDA by phone and was advised that the EDA could not conduct an investigation as it is only from a funding body,” the Cheboygan Observer said. The federal investigation into City Hall was dropped on April 4, 1980.

Lawsuits have also stalled progress. When structural problems were first discovered in the city hall building in 1978, the city council immediately fired the original architect, Douglas Morse Co. The city claimed that Morse had not managed to perform a structural analysis. They felt they could not afford to continue work on the Opera House due to the additional $400,000 needed to repair the structural damage discovered. The city council filed a lawsuit against Morse.

“The city paid Morse part of his contract fee before the issue was discovered. Council voted to authorize City Attorney Jeff Lyon to sue Morse to recover the money,” the Cheboygan Observer said. The city council wanted $40,000. Morse claimed his contract was terminated when he was fired. He filed a countersuit for $45,000 in payment owed. In October 1978, he offered to settle for $20,000. The city refused. The legal issue eventually went to arbitration that lasted two years. Both cases were dismissed in 1980.

The architectural firm Wulff and Nichols worked for the city to oversee the entire reconstruction. During the Morse arbitration proceedings, Wulff and Nichols repeatedly testified in court on behalf of the City of Cheboygan. The town hall did not pay the bill for the work. Frustrated with the lack of progress on the building, the city council resorted to not paying the contractors and threatening them with dismissal. In October 1979, “City Council voted on Tuesday night not to pay Tom Shaw for work done at the Opera House until the project was fully completed”, reported the Cheboygan Observer. “The stop payment was made as an incentive for Shaw to complete the project quickly and also as leverage in the event that the work was not completed to the satisfaction of the council.”

For three years of internal struggles, investigations, lawsuits and unpaid workers, the work of the Opera has been blocked. On January 16, 1981, the headline read “Opera Troubles Blamed on Quarrels. Peter Patrick, local solicitor and spokesman for Tom Shaw on the City Hall-Opera House project, said today he believes the delay to the project is the result of a row between the contractor Shaw and the architects Wulf and Nichols. But the problems went deeper.

On March 27, 1981, Wulff and Nichols resigned. The Cheboygan Observer said: “Tempers Flare. The city fights with the opera. The architects had accused the city of non-payment of its bills, of administrative interference in the project and of refusing to grant the increase in the hourly rate. Nichols blamed the board committee set up to oversee the project for numerous delays. He said: “City Manager Wright has been an asset to us, but the committee has not allowed us to make the judgments we should be making in accordance with our contract. Our authority is continually usurped by officials who are unaware of the project. … If you can’t uphold our professional judgments, you don’t need us.

Engineer and committee adviser James Muschell exploded at Nichols’ charge. “You are using the term spoofed inappropriately. We care about the quality of the work, not your authority. The opera committee spent many hours trying to protect the city, so I don’t like your accusations,’ Muschell quipped.

The Wulff Nichols Company withdrew its resignation when the city agreed to pay the outstanding bills and grant the hourly rate hike. But nothing happened.

On August 14, 1981, Gordon “Scoop” Turner wrote, “One of the things I mourn is the Opera House disaster. This fine auditorium on the second floor has become unsafe due to fire safety regulations and has been closed We vote the mile to restore it and remodel the Town Hall When the mile passed, the people rejoiced, they rang the bell of the town hall and gathered and sang at the Opera.

But the brick walls of the town hall were crumbling. It was so expensive to save the building and carry out the planned expansion and renovation that the mileage money was thrown into the pot. We now have a beautiful town hall, though not as beautiful as the original, and the opera house remains unfinished.

After:Opera History: Our Magnificent Opera House — Will It Be Preserved?

— Kathy King Johnson is the former Executive Director of the Cheboygan Opera House.