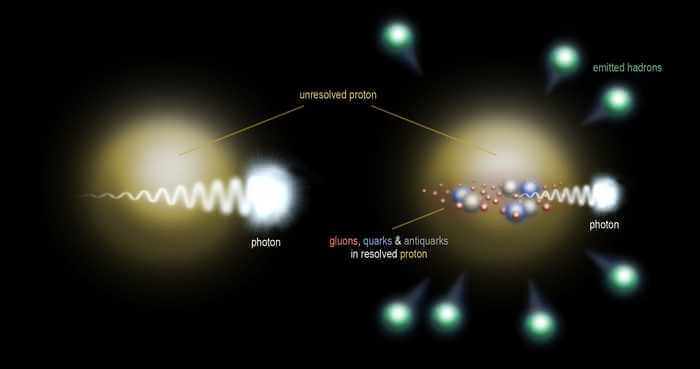 The interior of protons is maximally entangled

Mexican and Polish scientists have shown that fragments of the interior of a proton exhibit maximum quantum entanglement. The discovery, already confronted with experimental data, makes it possible to suppose that in certain respects the physics of the interior of a proton can have a lot in common not only with well-known thermodynamic phenomena, but even with the physics of… black holes.

Various fragments of the interior of a proton must be maximally entangled with each other, otherwise the theoretical predictions would not agree with the data collected in the experiments, it was shown in European Physics Review C. The theoretical model (which extends the original proposal of physicists Dimitri Kharzeev and Eugene Levin) allows us to assume that, contrary to current belief, the physics operating inside protons can be related to concepts such as entropy or temperature, which in turn may relate to objects as exotic as black holes. The authors of the discovery are Dr. Martin Hentschinski of the Universidad de las Americas Puebla in Mexico and Dr. Krzysztof Kutak of the Institute of Nuclear Physics of the Polish Academy of Sciences (IFJ PAN) in Krakow, Poland.

Mexican-Polish theorists analyzed the situation in which electrons are fired at protons. When an incoming electron carrying a negative electrical charge approaches a positively charged proton, it electromagnetically interacts with it and deflects its path. The electromagnetic interaction means that a photon has been exchanged between the electron and the proton. The stronger the interaction, the greater the momentum change of the photon and therefore the shorter the associated electromagnetic wave.

We can speak of quantum entanglement of various quantum objects, if certain characteristics of the objects are related to each other in a particular way. The classical analogy of the phenomenon can be represented by the drawing of lots. Suppose one object is one side of the coin and the other object is its other side. When we flip a coin, there is the same probability that the coin will land heads or tails up. If it falls heads, we know for sure that the other side is tails. We can then speak of maximum entanglement since the probability that determines the value of a characteristic of an object does not favor any possible value: there is a 50% chance of having tails and the same for tails. A sub-maximum entanglement occurs when the probability begins to favor one of the possible outcomes to a greater or lesser extent.

“Our study shows that the interior of a proton seen by a passing photon must be entangled with the invisible part in this maximal way, as suggested by Kharzeev and Levin. In practice, this means that we have no chance of predicting whether, due to the interaction with the photon, the proton will decay into three, four or any other number of particles,” explains Dr Hentschinski.

The new theoretical predictions have already been verified. If the entanglement inside the proton were not maximal, there would be discrepancies between the theoretical calculations and the results of the H1 experiment at the HERA accelerator at the DESY center in Hamburg, where positrons (c’ i.e. antiparticles of electrons) collided with protons until 2007. Such divergences were not observed.

The success of the Polish-Mexican tandem is due to the fact that the researchers managed to correctly identify the factors responsible for the maximum entanglement of the interior of the proton.

In the naive textbook view, the proton is a system of three elementary particles: two up quarks and one down quark. However, the strong interactions between these quarks, carried by the gluons, can be so strong that they lead to the creation of virtual particle-antiparticle pairs. These can be not only pairs of virtual gluons (which are their own antiparticles), but also pairs made up of any quark and its corresponding antiparticle (even as massive as the charm). All this means that inside the proton, with the exception of three valence quarks, there are constantly “boiling” seas of virtual gluons and virtual quarks and antiquarks.

“In previous publications, physicists dealing with the subject assumed that the source of entanglement must be a sea of ​​gluons. Later attempts were made to show that quarks and antiquarks are the main source of entanglement, but even here the proposed methods of description have not stood the test of time. Meanwhile, according to our model, verified by confrontation with experimental data, the sea of ​​virtual gluons is responsible for about 80% of the entanglement, while the sea of ​​virtual quarks and antiquarks is responsible for the remaining 20%. emphasizes Dr. Kutak. .

More recently, quantum physicists have associated entropy with the state inside a proton. It is a well-known quantity from classical thermodynamics, where it is used to measure the degree of disordered motion of particles in an analyzed system. It is assumed that when a system is disordered, it has high entropy, while an ordered system has low entropy. It has recently been shown that in the case of the proton, one can successfully speak of entanglement entropy. However, many physicists have considered the proton to be a pure quantum state in which one should not speak of entropy at all. The consistency of the Mexican-Polish model with experiment is a strong argument that the concept of entanglement inside the proton as proposed by Kharzeev and Levin has a point. Finally, since entanglement entropy is also related to concepts such as the surface of black holes, the last result opens up an interesting field for further research.

The Henryk Niewodniczański Institute of Nuclear Physics (IFJ PAN) is currently one of the largest research institutes of the Polish Academy of Sciences. A wide range of research carried out at IFJ PAN covers fundamental and applied studies, from particle physics and astrophysics, to hadron physics, high, medium and low energy nuclear physics, from condensed matter (including materials engineering), to various applications of nuclear physics in interdisciplinary research, covering medical physics, dosimetry, radiology and environmental biology, environmental protection and other related disciplines. IFJ PAN’s average annual publication output includes more than 600 scientific articles in high-impact international journals. Each year, the Institute hosts around twenty international and national scientific conferences. One of the most important facilities of the Institute is the Cyclotron Center Bronowice (CCB), which is a unique infrastructure in Central Europe, serving as a clinical and research center in the field of medical and nuclear physics. In addition, IFJ PAN operates four accredited research and measurement laboratories. IFJ PAN is a member of the Marian Smoluchowski Krakow Research Consortium: “Matter-Energy-Future”, which in the years 2012-2017 enjoyed the status of National Leading Research Center (KNOW) in Physics. In 2017, the European Commission awarded the Institute the HR Excellence in Research award. The Institute holds category A+ (the highest scientific category in Poland) in the field of science and engineering.