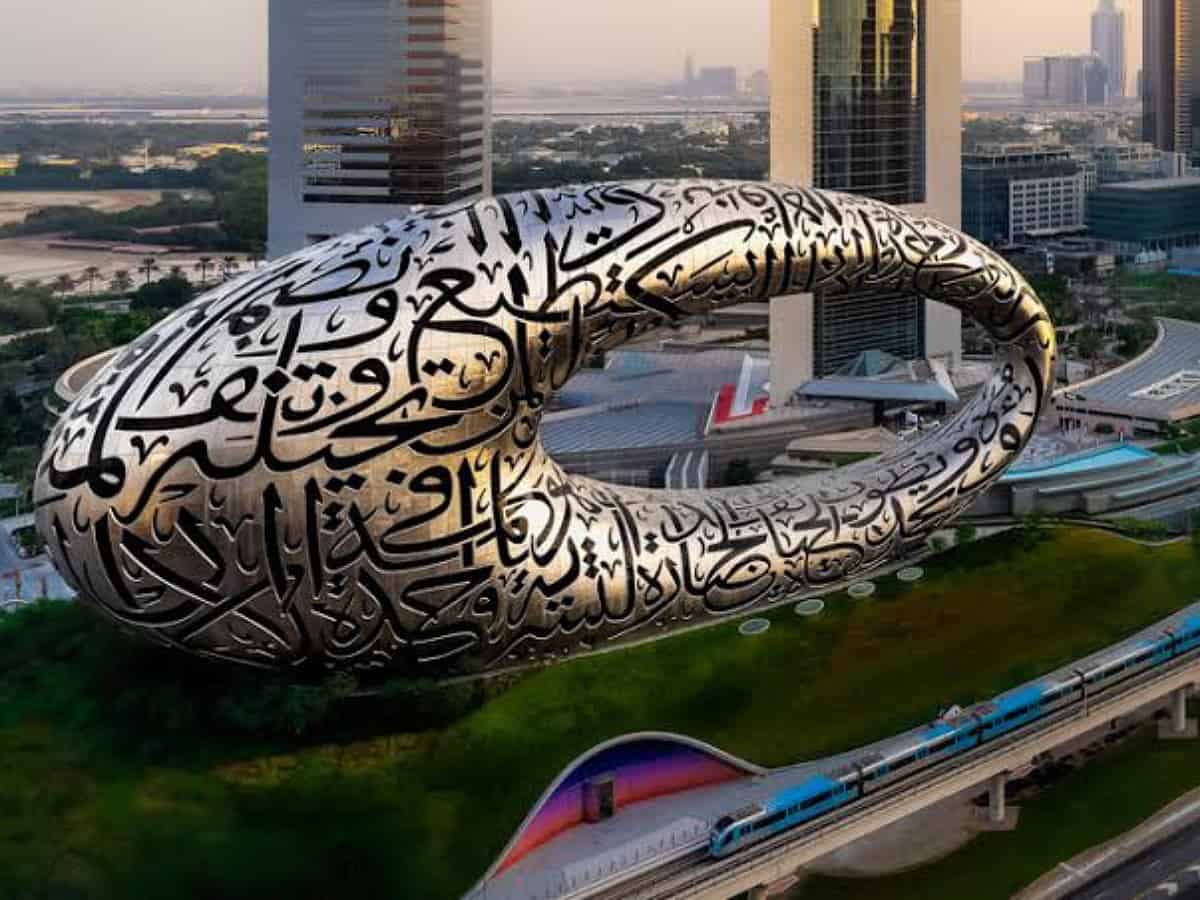 Abu Dhabi: As the world celebrates International Museum Day, the Dubai Museum of the Future, considered the most beautiful and futuristic building in the world, introduces a whole new concept as it is the only museum that talks about the possibilities of the future.

Open to the public in February 2022, the seven-story, column-less Museum of the Future is one of the most beautiful structures in the world. Stunning Arabic calligraphy is embellished on the building’s stainless steel shell, serving as perforations and openings to let in the rays of light. Acting as a connection between inside and outside, the cutouts on the stainless steel facade are designed by Emirati artist Mattar bin Lahej.

To advance the vision of the ruler of Dubai and the Prime Minister of the United Arab Emirates, Sheikh Mohammed bin Rashid Al Maktoum, the museum serves as a laboratory and space to develop the latest technologies in big data analysis, artificial intelligence (AI), virtual and augmented. Reality and human-computer interaction, which in itself is a unique idea for a building called the museum, where in general visitors always walk through the past and history.

Designed by Dubai-based Shaun Killa, the building pays tribute to the pioneering achievements of scholars and scientists in the region and symbolizes a bright future for humanity and evolution. The space also includes innovation labs dedicated to creating and testing ideas for a better future in urban design, smart cities, energy and transport, education, health and technology. other critical challenges. The museum welcomes people of all ages to see, touch and shape a common future.

Killa said in an interview that it is a building rich in culture, unique in form and technically complex in execution. Shaped like a human eye, the structure represents future vision and knowledge while the void represents the unknown we seek to discover. The main inspiration for the Museum of the Future was to create a form that represents the vision of the future of the Prime Minister of the United Arab Emirates, where the physical building embodies floors with exhibits that explore the possibilities of the world of tomorrow.

Some major challenges in the design of the Museum of the Future include the incorporation of calligraphy into the parametrically optimized form and as for the execution, it involved the coordination of over 1,000 unique structural nodes and their basic connections , to avoid conflicts with the secondary supporting steelwork, the layout and the MEP.

The Arabic calligraphy on the building consists of three quotes: “We may not live hundreds of years, but the products of our creativity can leave a legacy long after we are gone”; “The future belongs to those who can imagine it, design it and execute it”; and “The future does not wait. The future can be designed and built today”.

Announced in 2015, the Museum of the Future took almost seven years to shape and cost around $136 million. Recently, Dubai Tourism launched its latest campaign, “Creating the Future with Shah Rukh Khan”. The Bollywood superstar said: “Dubai never ceases to amaze me, it has always been a city of innovation and exploration with endless prospects.”

An important element of the museum revolves around the research and development of space travel and other complex topics like human DNA and genetics. With an array of experiential and educational exhibits, the Museum of the Future includes space travel and visual demonstrations of current global issues such as wildfires and climate change, and how we might solve them.

Other unique features of the museum include a sculptural spiral staircase and several enchanting bubble elevators that transport visitors into the “unknown” from the huge atrium. As part of a dramatic architectural gesture, a sky bridge beautifully crosses the void of the structure, serving as a harbinger of a new and advanced era. This location is a manifestation of the point where past, present and future unite.

The Museum of the Future is the first of its kind. Built to transform the very perception of the future as we know it, the unique structure houses several immersive future environments that aim to position visitors in a challenging version of the future. Through distinctive themes, he evokes a world that we thought we could only know in 50 years. Visitors become active participants in a vast experience that appeals to the five senses. By meaningfully merging aspects of science and technology, it inspires humanity to re-imagine the future and all of its possibilities.

One of the most complex and ambitious projects ever executed, with an inimitable exterior that is instantly iconic. Rising 77 meters above the ground, covering 3,23,000 square feet of floor space and comprising 1,024 unique stainless steel composite panels, the facade is adorned with Arabic calligraphy.

There is no other building in the world built with such superior technologies, which distinguishes it from other monuments and breaks records before its completion. Not only has the structure been ranked among the 14 most beautiful museums on the planet in a list compiled by National Geographic, but it has also won the Tikla International Building Award as a unique architectural model. Autodesk Design Software further declared the Museum of the Future to be one of the most innovative buildings in the world.

Often we wonder what the future might look like, consider a range of possibilities, and question our own positioning in the world of tomorrow. What will our life be like? What future for our children?

Today the future is at humanity’s doorstep, the opportunity is there because we believe the future is something we can design ourselves.

Driven by the wise vision of its leadership, as always, Dubai has brought to life a one-of-a-kind centre, enabling visionaries, talent and great minds from around the world to shape the future.

The Museum of the Future is a “living museum” aiming to contribute to a profound intellectual movement, connecting thinkers and experts from around the world and acting as a test bed for future generations to create innovative solutions. the challenges facing society.

Constructed using robotic technology and with a focus on sustainability, the building is powered by 4,000 megawatts of solar energy. The Museum of the Future uses the latest technologies in virtual and augmented reality, data analysis, artificial intelligence and human-computer interaction. Answering many questions related to the future of humans, cities, societies, life on planet Earth and in space, the museum exhibits orchestrate a world beyond human knowledge, offering visitors innovative experiences that unfold through five different exhibits that explore the future of space travel and life, climate change and ecology, health, wellness and spirituality.

Face to face with never-before-seen space technology and learning about humanity’s home in space, the visitor’s journey begins in the depths of our solar system. Paying homage to the inspiring Emirates Mars Mission project which saw the Hope probe successfully enter Mars orbit last year, this exhibit completes a milestone for the UAE and the Arab world.

The museum of the future experience encourages its visitors to participate in special missions and, unlike a traditional museum which presents fragments of the past, it offers a portal to the future, in a scientific attempt to explore its variables, challenges potential and its expected characteristics. .

The visitors’ journey also highlights the UAE’s position as one of the first countries to announce its commitment to achieving climate neutrality by 2050, and a tribute to the country’s efforts to plan for hosting the 28th United Nations Framework Convention on Climate Change (COP28) in Abu Dhabi. in 2023.

Khalfan Belhoul, CEO of the Dubai Future Foundation, explained how this museum is unlike any other. “Unlike typical museums where the value of displays increases in value over time because it ages, when you talk about the future you have to constantly stay relevant to the future. So we’re very excited about to be able to continue to create this history,” he said.

Sarah Al Amiri, UAE Minister of State for Advanced Technologies and President of the UAE Space Agency, said: “It provides the human element, which is the most important ingredient for the innovation and development, for us, this is a major ingredient in developing the economy and further diversifying the economy, and more importantly, in increasing the impact and results of existing sectors of the economy. ‘economy.

While the Dubai Museum of the Future is one of the latest technological and architectural marvels in the UAE, it also embodies the country’s diverse natural ecosystem, home to a vast array of local flora and fauna, both terrestrial and marine.

One cannot help noticing the immense green plateau on which the building stands. Upon closer inspection, guests discover that the hill is actually a resplendent garden comprising over a hundred species of trees and plants, reflecting the natural diversity that is an integral part of the heritage of the United Arab Emirates.

Featuring ghaf, sidr, palm and acacia trees, which are well adapted to local environmental conditions, the garden is equipped with a smart and automated irrigation system and supports local bee and bird populations. With Dubai’s summer temperatures reaching nearly 50 degrees Celsius and an average rainfall of 130mm per year, irrigation was one of the main considerations for the plateau. A smart irrigation system uses a mat below the surface that delivers water directly to the root system in a targeted and efficient approach. The steep slopes of the plateau allow rapid runoff of water, eliminating the need for water-intensive flood irrigation. The steep slopes of the hill allow rapid flow of water, eliminating the need for pump irrigation. In addition, water collection and recycling systems are used to reduce water waste by approximately 25%.

The UAE is a country that knows how to take care of its heritage. There are over 50 museums across the country. In which, along with the Future Museum, the Louvre Abu Dhabi, the Sharjah Islamic Museum and the Dubai Museum are important.

There are 16 world-class museums in Sharjah alone. Sharjah, through its 16 museums, covers a very diverse field, including Islamic art and culture, archaeology, heritage, science, marine life, as well as the history of Sharjah and the region.

The Louvre Abu Dhabi is one such cultural beacon that brings together diverse cultures to shed new light on the shared stories of humanity. It represents the dynamic nature of the contemporary Arab world while celebrating the dynamic multicultural heritage of the region.