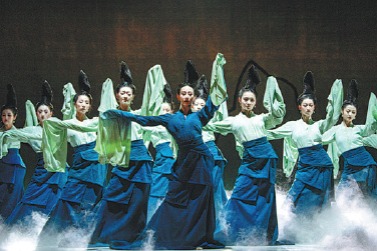 With new productions and new theatrical spaces, the Shanghai Grand Theater kicked off its 2022 Spring and Summer season on February 24. The new season includes over 200 performances from 60 productions.

The Shanghai theater established its own production center last year and will launch three new productions this year: the Chinese editions of The Karamazov brothers, a South Korean musical; Frankenstein, a British play by Nick Dear based on the novel by Mary Shelley; and a new edition of the classic Chinese opera piece Kunqu The pavilion of peonies.

The theater will introduce a new space, the Young Theater in Yangpu District in March, and the West Bund Theater in Xuhui District will open next year. The Shanghai Grand Theater will also launch a themed art season in all three halls in the future.

The number of shows and box office receipts dropped significantly in 2020 due to the COVID-19 pandemic, but last year the numbers returned to what they were in 2019, Zhang Xiaoding said, general manager of the theater at the opening of the season.

“Today’s theaters must not only present classic, innovative, interdisciplinary and crossover performances, we must also provide an irreplaceable experience for the audience,” Zhang said.

“You can see the highlights of the poetic dance, The journey of painting: the legend of a panorama of mountains and riverswhich was shown at the China Central Television Spring Festival Gala, and again and again online, but if you want the full experience of a dance theater production, you’ll have to come to the theater and you submerge in it.”

The dance show will be staged again at the Shanghai Grand Theater in April, and tickets for all four shows, scheduled for April 28-30, sold out within minutes of becoming available on February 24. Following discussions with the performing company, two more shows are being added for May 1 and 2.

Despite the ongoing pandemic, the Shanghai Grand Theater staged 419 shows last year, receiving more than 310,000 spectators. The theater also reported an unprecedented dominance of younger audiences – almost 65% were between the ages of 21 and 40.