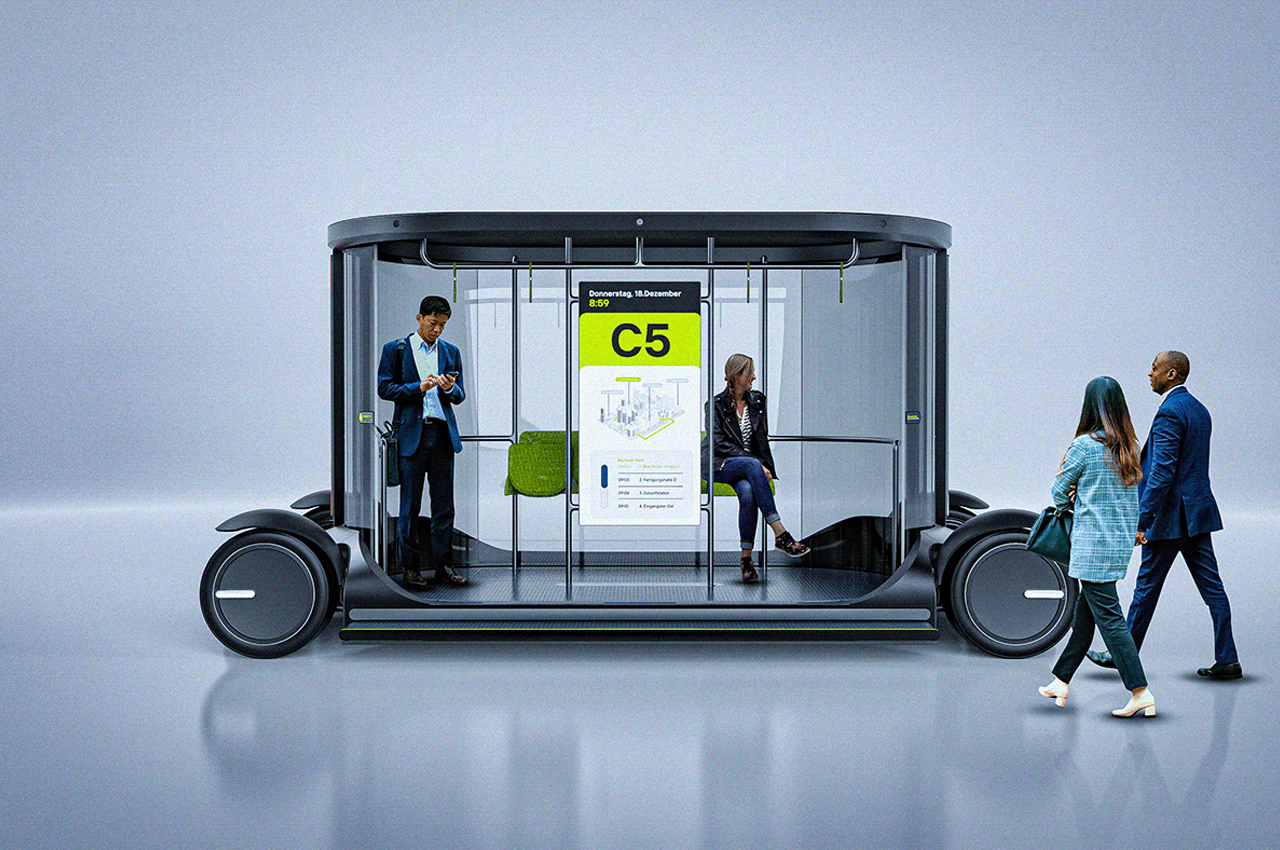 This autonomous shuttle reinvents the last mile commute with informative graphics and a minimal, transparent design

Modern architecture is constantly reinventing what cities might look like in the future, but public transport still lives in the age of dilapidated buses and faulty subway trains. Squeezing between clever office buildings and gleaming skyscrapers on a crowded ’90s bus proves that public transportation may need to be rethought. By designing Campus Shuttle as a mobility concept to connect busy drop-off / pick-up areas, student designers Kilian Wiesmann and Nils Achenbach wanted to rethink public transport through a transparent and autonomous public bus.

The designers prioritized versatility and accessibility with Campus Shuttle to ensure a smooth ride for everyone. From the outside, wheelchair access is made available via a retractable ramp that connects the curb with the shuttle entrance. Organized entertainment and LED traffic lights communicate with other vehicles on the road through autonomous programming. Built from curved glass panels and an aluminum frame, Campus Shuttle is a fully transparent four-wheeled vehicle.

Getting into the Campus shuttle is as easy as unlocking your smartphone. Using proximity sensors located in the sliding doors of the shuttle, commuters can access the shuttle by scanning their ticket barcode or paying for a ticket through Google or Apple Pay. Retractable seats line the perimeter of Campus Shuttle’s interior space, providing flexibility and creating more space when needed. Located in the center of the vehicle, an interactive information center helps commuters become familiar with the shuttle route and the surrounding city.

Campus Shuttle is designed to transport commuters between busy pick-up / drop-off areas in major cities, such as airports, campuses, office buildings, and public markets. The designers explain: â€œOur trend research phase has shown remarkable inefficient transport in large cities. Individual traffic takes up a lot of space. In addition, the number of passenger cars in Germany has grown relatively steadily by half a million vehicles per year over the past two decades, from 450 cars per 1,000 inhabitants in 1998 to 560 cars per 1,000 inhabitants. in 2018. â€Designed to take public transport out of the 1950s, Campus Shuttle has a futuristic and elegant profile.

In cooperation with Brose Mechatronics, Wiesmann and Achenbach have designed Campus Shuttle as a city staple for the public transport industry. Designed with five curved glass panels that surround the aluminum beams, Campus Shuttle maintains a minimal look. When in motion, Campus Shuttle almost seems to hover above the ground, connecting a vision of futuristic public transport with contemporary architectural landscapes. Personally, I see him as a nightrider in the dark, hovering above the street in stylish lighting. The Campus Shuttle’s low-rise construction makes it appear to be hovering above the ground when in motion.

Campus Shuttle was designed to be versatile and accessible, so the designers implemented the most advanced intelligent technology in the autonomous design of the shuttle. Preprogrammed traffic lights and wheelchair ramps add the overall safety factor of Campus Shuttle. These design elements focus specifically on local users: â€œThe university consists of several distant buildings that can be difficult to reach on foot, especially for students and staff with disabilities. This is exactly the challenge we took on with our concept vehicle: connecting large areas such as universities, company facilities, airports and trade fairs.

With a traditional indoor bus design, Campus Shuttle is familiar enough for commuters to understand it intuitively and the modernization of the design makes it more accessible, providing a win-win situation that will certainly be appreciated by all users!

Pentagon says its AI could predict events days in advance