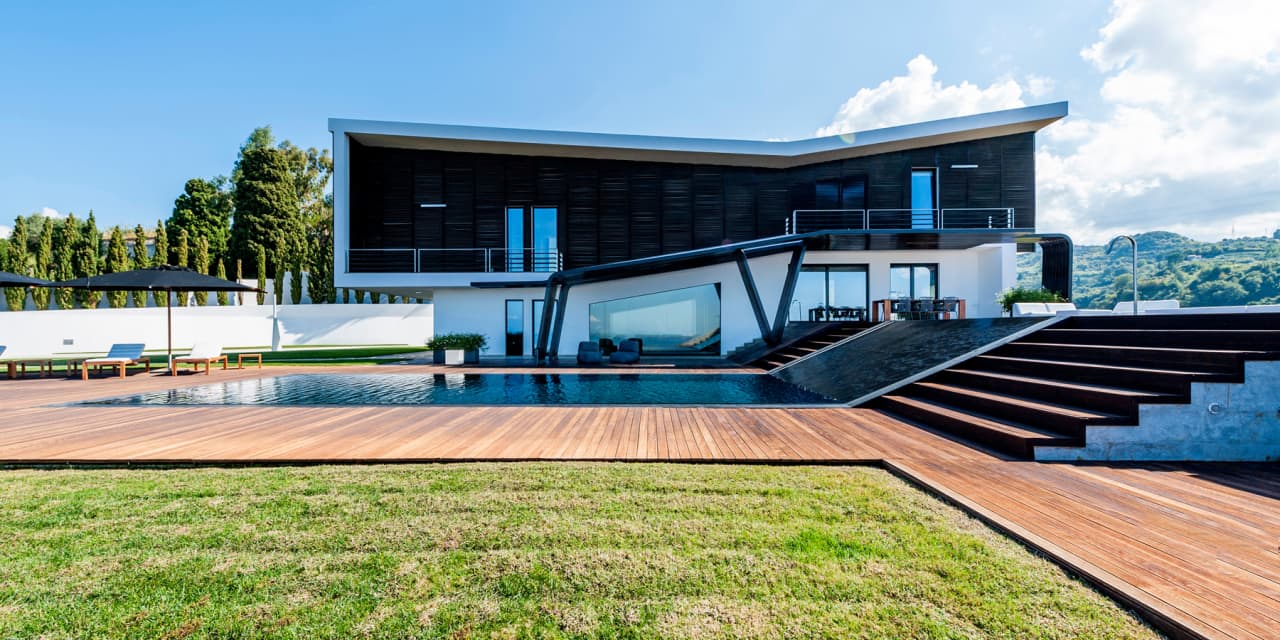 This award-winning contemporary home contrasts sharply with the Gothic architecture and ancient stone buildings it overlooks from its hillside perch above the Sicilian old town of Milazzo.

The glazed, wood-wrapped Italian villa has a tiered, low-carbon design, set on a verdant hillside overlooking the Aeolian Islands. It features a sunken rooftop terrace, central double-height living space and panoramic sea views. Architecture studio Urban Future Organization (UFO) designed it to blend in the surrounding natural landscape while reducing its impact on the environment, according to sales agent Diletta Giorgolo.

UFO built the house according to a “folding” concept, which they researched and developed in London.

Continued: The Sicilian castle where ‘The Godfather: Part III’ was filmed is almost as big as the White House

“The central volume visually connects all the rooms together [and is] flooded with natural light from several openings, including overhead light and is therefore always different during the day and throughout the seasons,” said Ms. Giorgolo.

The top of the coastal property features a sunken rooftop solarium, wrapped in wooden brise-soleil to break up the sun’s rays. Its staircase has a wall of glazed glass, which pours light into the main reception room below. Meanwhile, an outdoor wooden ramp slides over the side elevation to a balcony and its outdoor pool has water flowing over two levels, reminiscent of the gentle movement of waves.

The modern Sicilian house revolves around a double-height living space, from which the rooms radiate. Zigzag open staircases, glass walls, and balustrades tower over the space, creating an open, flowing layout. The living space captures the postcard scenery through walls of windows.

In addition to the swimming pool, the property is fitted with furniture from high-end designer brands such as Porro, Cassina and Cappellini, and lighting fixtures from Flos, Artemide and Guzzini. It also has an alarm system, stainless steel Boffi kitchen, wine cellar, home gym and basement.

A driveway runs around the house and has a high embankment on one side which enhances privacy. It opens onto a 0.8 acre lawned garden with new landscaping. There are plans to build a helipad on its land, which is included in the sale price.

The property also includes a 5-hectare farm with 4,500 fruit trees and an Aeolian-style house with kitchen-living room, bedroom, bathroom and patio overlooking the valley and the sea.

The hilltop property is in a hamlet of Messina, near the town of Milazzo. The port city of Messina sits at the northeastern tip of Sicily, which is separated from mainland Italy by the Strait of Messina.

The Sicilian property has won numerous awards and in 2017 it was nominated for the European Union Prize for Contemporary Architecture – Mies van der Rohe award, according to sale details.

Its walls are co-extruded with natural cork and there is a ventilated wall made of okume wood, which naturally reduces the temperature inside in the summer and maintains the heat in the winter. Its rooms, on the other hand, have no electric wires behind the headboard and are equipped with a switch (a bio switch) which cuts off the electricity during hours of rest.

Write to the announcement of the day