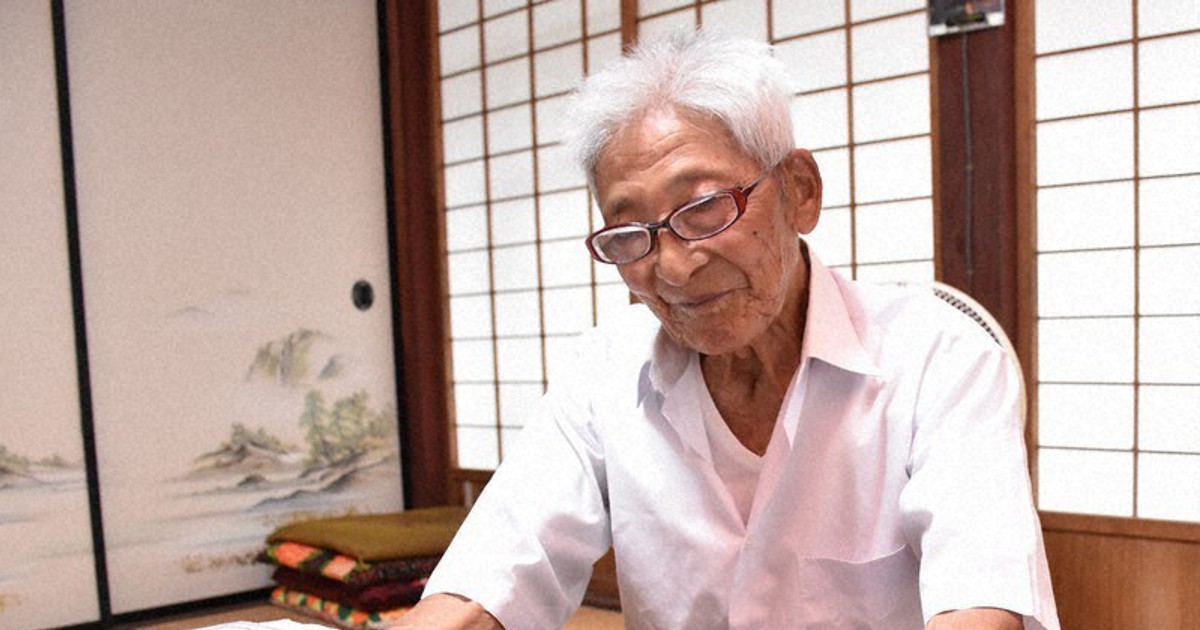 What did some of these A-bomb survivors, or hibakusha, think who left the devastated cities and now live in Ishikawa Prefecture? A reporter from Mainichi Shimbun, a third-generation survivor of the Nagasaki atomic bombing, interviewed them.

In the heart of a mountainous area in Nanao City, Ishikawa Prefecture, 94-year-old Minoru Sawano continues to pray for peace. Sawano, who was exposed to radiation when he entered the city of Hiroshima shortly after the atomic bombing, repeatedly said, “War must never be fought.

In February 1945, while a second-year student at Ishikawa Nanao Prefectural Agricultural School (the predecessor of present-day Nanao Shinonome High School), Sawano applied to become a special army ship cadet. . “If I have to do it, better do it early,” he thought. Reflecting on his feelings at the time, he said, “I didn’t think I was going to die yet.”

On Shodoshima Island, Kagawa Prefecture, where Sawano was assigned, he learned hand flag training and ship’s engine structure while being told by his superiors, “You are a sacrificial pawn for your country!”

In June of the same year, Sawano was assigned to a suicide mission and began training on the island of Etajima in Hiroshima Prefecture as a crew member of the “Maru-re”, explosive-laden plywood suicide attack boats designed to ram enemy ships. When it was decided that he would join the suicide squad, he thought of the faces of his family and decided, “This will be the end.

On August 6, as Sawano rested in his barracks after practice and breakfast, he felt a flash of light dozens of times greater than the burning of magnesium and by face-down reflex. He also heard a loud “boom” that nearly ruptured his eardrums. Looking towards the city of Hiroshima, the young soldier saw a white mushroom rising in the sky. The order was given to rescue the town being bombarded by A, and when he arrived there by boat he saw a scene that could not be described in words.

“It was like hell,” he recalls. There were people with missing limbs, people walking around with burnt skin hanging off them. When rescuing the wounded, “the worst thing” was tending to the dead.

When Sawano grabbed a victim’s hand to pull it out of an air-raid shelter, its skin peeled off. The river was full of bloated bodies floating in the water. In a fire pit, a young woman lay dead with a baby in her arms as she presumably tried to escape the heat. He wondered, “What kind of heat could have killed them?” The young man piled up two or three of the bodies he had collected and continued to cremate them. He had no idea how many people he had cremated.

“Water, water, soldier, water,” shouted many people in Sawano. His superiors forbade him to give them water, saying it would kill them, but he was forced to offer water from his canteen to two or three of them in response to their pleas. Yet, after taking a sip, they smiled and passed away quietly. He just stood there, feeling helpless.

It was the hellish world that Sawano saw when he was a teenager. “I had a job that scared me. I didn’t want to do it, I was made to do it,” he said. He spent the first few days of the mission feeling terrified, but before he knew it, he got used to it.

Shortly after returning to Etajima, the war ended, and in late September 1945 Sawano returned to his hometown of Nanao, only to find a harsh reality awaiting him there.

In 1950, Sawano married a woman he had known since elementary school. However, when his wife became pregnant, he wondered if she would be able to give birth to a healthy baby, and he felt uneasy until he saw the baby in healthy and full of energy. Among his comrades who entered Hiroshima immediately after the atomic bombing, several chose to remain single rather than marry.

Sawano had decided not to talk about Hiroshima, but as the hibakusha experiences were reported in the press and atomic bombing-themed exhibits were held, people gradually became aware of the attack and hibakusha, and he became determined to reveal his own experience without fear of prejudice. He agreed to be interviewed by the media and also gave lectures at temples and schools in Nanao.

But Sawano also felt conflicted. He had to think back to those hellish days to recount his experiences. There were times when wounded people begging for water appeared in his dreams. “It’s a terrifying experience that I mustn’t forget, but it’s also hard to think back on,” he said.

Yet Sawano has not actively shared details of his experiences with his own children and grandchildren. He laughed it off saying, “They don’t want to hear about it and they don’t want to know about it,” but in fact he wrote a few-page memoir outlining the situation for them.

What Sawano wants to pass on to generations who have never known war is that “War must never be fought. We owe peace today to the victims. We must not forget the feelings of those who have perished”.

As a third-generation A-bomb survivor in Ishikawa Prefecture, far from Hiroshima and Nagasaki, this reporter felt compelled to continue recording the lives of survivors.

(This is part two of a two part series)